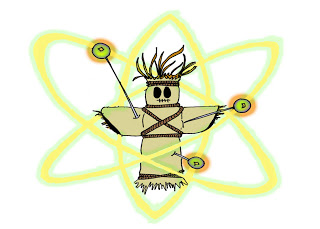 “Voodoo economics” is a derogatory phrase coined by George H. W. Bush during the 1980 presidential election campaign in which he characterized President Reagan's economic policies, as being unrealistic and ill-advised particularly with respect to increased levels of public spending and reducing taxes.

The phrase has since become widely-used to dismiss the overly ambitious economic pledges of politicians in general but when political ambition overrides science, particularly concerning thermodynamics, the bad policy quickly becomes lethal.

Opportunity costs are the loss of potential gain from one alternative when another is chosen.

Nevertheless, SDACCS/U and CCS/U have become the pet projects of the Fossil Fuel Industry and its political schills in their effort to keep the revenue and largess flowing even though both defy the laws of thermodynamics and will never be the zero-emissions technologies needed to preserve humanity.

Michael Barnard in his piece Chevron’s Fig Leaf Part 1: Carbon Engineering Burns Natural Gas To Capture Carbon From The Air in its title alone exposes the lunacy of a perpetual motion that would violate the first and second laws of thermodynamics. Nevertheless, this ersatz magic bullet has recently been funded to the tune of $68 million by three fossil fuel majors and $25 million from the Canadian government even though as Bernard says, the technology is more of a lead balloon than a magic bullet.

As he points out, $68 million is a fig leaf. It’s 0.03% of the three fossil fuel companies combined annual revenue. It’s change they found in the couch. It gives them a nice slurry of green paint to pour over their tarnished images and is cheap at twice the price.

And this is but one example of the fossil fuel industry and its political hawkers trying to demonstrate to us useful idiots that they can, at our expense, walk and water.

Take for example the reverse alchemy experiment being undertaken in Alberta where short-chain carbon hydrocarbon in the form of natural gas is being burned to create long-chain oil sands contrary to the way these chains are produced in nature.

Another example of the reverse Midas touch (poor thermodynamics) in action is the current effort in British Columbia to produce clean hydropower to compress and transship carbon-emitting LNG to Asian markets. Which is why Canada’s federal government has no qualms about throwing British Columbia under the bus with respect to expanding the Trans Mountain Pipeline to increase shipments of Alberta and Saskatchewan’s hydrocarbons through the heart of the world’s most beautiful harbor and Canada’s third most densely populated city in order to service the same Asian markets British Columbia is also trying to tap into.

These markets would be much better served in their own backyard by thermodynamic geoengineering, BC technology, that produces twice as much energy as is currently being provided by fossil fuels, that cools the Earth’s surface, reduces sea level rise, sequesters atmospheric and ocean carbon dioxide and neutralizes ocean acidity.

The political calculus for trying to placate Alberta and Saskatchewan at the expense of British Columbia, even though the prairie provinces haven’t lifted a finger over the course of the past thirty years to help themselves, is the belief that the prairie provinces are the greatest threat to Canadian unity even though Quebec elected more separatists than governing Liberals in the last election.

Quebec, on the other hand, is the roadblock to a pipeline from Alberta and Saskatchewan to the east coast which imports 0.6 million metric barrels of oil a day from foreign sources.

Northern Saskatchewan is the world's second-largest producer of uranium, exporting about 85% of its production globally with the remainder used to fuel CANDU reactors, mostly in Ontario where nuclear power provides 60 percent of the province’s electricity and the bulk of its manufacturing might.

Andrew Blowers, a former member of the UK’s Committee on Radioactive Waste Management, claims in the August 1, 2019, Guardian article, What should we do with radioactive nuclear waste?, spent nuclear fuel is the Achilles’ heel of the industry”. And that “currently no options have been able to demonstrate that waste will remain isolated from the environment over the tens to hundreds of thousands of years” it needs to be sequestered.

In 2005 the Canadian Nuclear Waste Management Organization recommended that all the country's used fuel should be placed in one deep geological repository at an estimated cost of $23 billion, which is an opportunity benefit to the host community, which Ontario appears to covet.

As pointed out here and here spent nuclear fuel, however, is actually a heat resource and source of ionization radiation that can fracture the long chains of Alberta’s bitumen resource into more valuable fractions and to mobilize the highly viscous so that it can flow to a producing well.

This Canadian technology, which comports with the laws of thermodynamics and  for which a patent was filed in 2008 could have been a $100 billion opportunity for Alberta which was instead disparaged and disregarded even though the Guardian article now notes that the same horizontal, directional drilling technology is now being proclaimed by the US firm Deep Isolation as the solution to the nuclear waste problem.

Deep Isolation claims it can reduce by two-thirds the cost of permanent storage, which in reality is another lost opportunity for Canada, particularly Alberta where office buildings are half empty and thousands of energy workers are on the street.

Overriding science and the opportunities it provides is the way nations and ultimately civilizations parish and on the unity score Canada is well on its way to self inficted breakup largely preciptated by its failed innovation policies.

"...hydrogen has more energy per gram than any of the hydrocarbons."

Jim, elemental hydrogen does not exist in nature. Subtract the Gibbs free energy necessary to separate hydrogen from the compounds in nature bonded to it and add in energy needed to pressurize/liquify it. Then we have a comparison.

Given the only practical source of hydrogen is steam-reformed natural gas (a process which itself consumes copious amounts of natural gas), it seems hydrogen too has

"...become a pet project of the Fossil Fuel Industry and its political schills in their effort to keep the revenue and largess flowing even though it defies the laws of thermodynamics and will never be the zero-emissions technologies needed to preserve humanity.

Why would Chevron and Shell invest $millions in promoting the California Fuel Cell Partnership if hydrogen represented any kind of threat to their core business?

Uranium has 677,000 times the amount of available energy as liquid hydrogen per gram. Granted, some energy is needed to mine and enrich it, but not that much. And unlike renewables and hydrogen, nuclear energy requires no hydrocarbons to be viable - 100% carbon-free electricity. Let's go with uranium fuel instead.

I side with Jacobson in the Stewart Brand/Mark Jacobson TED talk about nuclear power although neither consider thermodynamic geoengineering that is one of the technologies one participant at about 3 minutes remaining in the debate acknowledges is one of the technologies that will emerge within the next 5 years that will blow nuclear power out of the water.

It turns the heat of warming to usefull power.

will emerge within the next 5 years

I'm all for the big disruptors, but being able to change the game in the next 5 years is an ambitious promise, and I always worry about clean energy tech that overpromises and underdelivers on timeline. We've gone through so many of those that it's an easy way to get the potential breakthrough dismissed as too ambitious or optimistic. What makes you hopeful for this 5 year timeline, Jim? I'd love to hear the promise to come

The breakthrough has already been made. The 5 years is only too gain acceptance. After which it will take 50 to 100 years to build out during which time the technology gives us a 225 to 250 year of global warming buffer during in which to bring down atmospheric atmospheric greenhouse levels to preindustrial levels.

I looked/listened within the TED talk for the thermodynamic geoengineering tech that you mentioned.  I didn't see it.

Could you point to exact time on talk or perhaps provide another link describing what you are talking about?

Joe the TED talk didn't mention thermodynamic geoengineering. The talk was referenced in response to Bob's comment about nuclear power. At the end of the talk one of the commentators noted that five from now there would be a very different world with respect to climate change.

Thermodynamic Geoengineering was introduced in the 2015 MIT Climate CoLab competion and a Canadian patent for a Method and Apparatus for Load Balancing Trapped Solar Energy based on the notion was filed in 2017.

In combination with the work of Greg Rau of the University of California, Santa Cruz Institute of Marine Sciences it became Negative Emissions CO2 Ocean Thermal Energy Conversion which is slowly gaining recognition as one of the best to solution to the energy/environment problem.