In Texas, Incentives for Wind & Solar Development Were Extended, but Storage Questions Go Back to PUCT 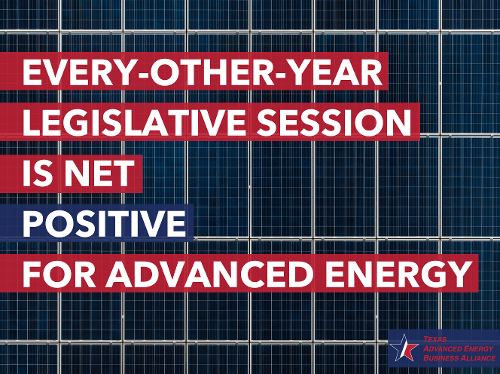 In odd-numbered years, the Texas Legislature meets for 140 days starting on the second Tuesday in January to consider the state’s regular business, with the main objective of passing a two-year budget. This year, as always, bills introduced with potential impact on the state’s energy system covered a wide range of topics, both positive and negative for advanced energy. This session, the Texas Advanced Energy Business Alliance (TAEBA) was directly engaged with or closely watching approximately 80 bills. When the Legislature gaveled out on Memorial Day, the outcomes for advanced energy were net positive, with tax incentives for large-scale renewable energy projects preserved and onerous fees on electric vehicles avoided. And while the Legislature didn’t pass a bill on ownership of battery storage, that issue goes back to the Public Utility Commission of Texas (PUCT) with some clear indications of legislative preference.  Here are the highlights from a very busy legislative session.

In recent sessions of the Texas Legislature, renewable energy has been on the defensive, in spite of all the economic development that has come with Texas’ rise to national prominence in wind and solar energy.  Bad bills targeting wind and solar energy were filed again this session, but were defeated through the joint effort of allied trade associations and individual member company engagement. HB 2908 and SB 2232 directly targeted wind and solar technologies by requiring a study of so-called market distortions associated with federal tax incentives for renewables without looking at market impacts of all energy industry subsidies more broadly.  Fortunately, HB 2908 died in the House Calendars committee and SB 2232 died in the House State Affairs committee.

Recent sessions have also revolved around defense of Chapter 312 and 313 tax incentives, which benefit large scale renewable projects that locate in the state, but also large manufacturing, data centers, and other economic development projects. More than 15 bills were filed this session that would have made changes to one or the other of these programs. In good news for advanced energy,  HB3143 (Murphy) passed both chambers and has been sent to the Governor. This bill imposes additional transparency requirements on the Chapter 312 process, but also provides an important 10-year extension of Chapter 312, which is a win.  Additionally, no adverse legislation related to Chapter 313 made it through the legislative process this session, as messages about the economic development benefits of solar and wind in the state, particularly in rural communities, resonated with legislators.

One TAEBA priority bill that didn’t make it to the finish line, but provided important policy guidance nonetheless, was SB 1941 (Hancock). This bill addressed the highly contentious topic of battery ownership by utilities in ERCOT. As filed, the bill tracked fairly closely the comments filed by TAEBA last fall in the Public Utility Commission of Texas (PUCT) rulemaking on non-traditional technologies in delivery service. AEP-Texas had applied for permission to install batteries to solve distribution reliability issues. The PUCT dismissed that petition, and opened the rulemaking to take input from a broader set of stakeholders than had participated in the AEP-Texas contested case.  Our comments at the PUCT advocated for prioritizing competitive market solutions, with a focus on creating new opportunities for utilities to contract for non-wires solutions with competitive providers of reliability services. But our proposed framework also provided for the possibility that a utility could own batteries with PUCT approval if no competitive solutions were available.

Because the ownership issue has been so contentious among stakeholders, the Commission suggested that the Legislature could help by providing additional clarity. Versions of SB 1941 that passed unanimously in the Senate and were approved by the House State Affairs committee went further than what we had recommended to the PUCT, eliminating the utility ownership possibility altogether, but clarifying, consistent with our recommendation, that utilities should be allowed a rate of return on reliability contracts, in order to reduce the inherent regulatory incentive to build traditional “wires” solutions. On the day that the bill was scheduled for consideration on second reading in the House, the chamber ran out of time and the bill died at midnight.

We’ll be back at the PUCT soon for continuation of the non-traditional technologies rulemaking (Project 48023), without the legislative clarification sought. Even without legislation being passed, however, the direction of the Legislature on energy storage ownership and reliability contracts seems pretty clear – and that input has been received by the Commission.

We were watching almost 20 bills related to electric vehicles and the Texas Emissions Reduction Plan (TERP), which supports EV purchases. Several bills were filed that would have imposed fees on EV owners for vehicle registration, either through a formula or as a flat fee, as high as $300 annually.  The purpose of these fees would be to capture state revenue for road maintenance that is not collected from EV drivers because they do not pay gasoline taxes. TAEBA opposed the imposition of fees due to the nascence of EV markets, but did support a study to determine what would be EV owners’ fair share of roadway funding.

An amendment was added to the Department of Motor Vehicles (DMV) sunset bill (SB 604), and after two different versions went to conference committee, the final bill included a study provision. The DMV will be required to organize a study jointly conducted by several state agencies, including the PUCT, Texas Department of Transportation, the Department of Public Safety, and the Texas Commission on Environmental Quality. The study must examine current revenues from motor vehicle fuel taxes and current revenues from alternative fueled vehicles (which is broader than just electric vehicles), including registration fees, motor fuel taxes, and taxes, fees, and surcharges on the retail sale of electricity consumed by alternative fueled vehicles. The study must also examine alternative methods for collecting revenue, including methods in place in other states, and must evaluate the impact of alternative fueled vehicles on the state highway system, environmental benefits to the state, and projected impact on the state’s power grids and electricity markets. So no new EV fees for now, but we should expect that the 2021 legislative session will include substantial activity around this and other topics associated with electric and other alternative fueled vehicles.

In other good news, authorization to collect TERP fees has been extended until ozone attainment is achieved. This extension is important because these fees fund the state’s $2,500 electric vehicle purchase incentive and other programs administered by the Texas Commission on Environmental Quality.  HB 3745 (Bell) includes the fee extension and creates a trust account to facilitate TCEQ administration of the funds. There were attempts to eliminate the $2,500 EV purchase incentive itself, such as HB 889 by Murphy, which did not make it out of committee, as well as an amendment to a House bill that would have forced recipients of a TERP EV incentive to give back $750, but that bill died in the Senate even after that language was stripped.

In other successes, three bills to spur deployment of advanced metering in the non-ERCOT regions of the state passed the Legislature without controversy. HB1595, HB986, and HB 853 have all been signed by the Governor.

One important advanced energy that did not get addressed this session was the role of distributed energy resources. HB 2860 (Raymond) and  SB 2066 (Mendendez) were companion bills that would have affirmed the rights of customers to invest in onsite distributed generation and energy storage technologies, but they did not make it through the process. We anticipate that this issue will be ripe for study during the interim period before the Legislature reconvenes in 2021. As I noted in an op-ed published in the Houston Chronicle, integrating distributed energy resources is the next frontier in energy competition in Texas, so we anticipate that interest in this topic will continue to grow among legislators and regulators alike.

Now that the Legislature has wrapped up its business for the 2019-2020 biennium, TAEBA’s focus will turn back to regulatory activities and interim work to prepare for 2021 as the cycle continues.