To date, PGE has deferred plans to diversify away from coal, for example into offshore wind, until the mid- to late-2020s, and only after a massive investment programme has cemented the utility’s dependence on coal, already at 91% of total generation.

Since that report, European carbon prices have risen by one third, to €20 per tonne of emissions (and have more than doubled this year to date). These rising carbon prices threaten returns on a coal investment programme which includes: last year’s PLN 4.3 billion acquisition of EDF’s Polish coal assets; PLN 1.9 billion upgrades of existing assets, to comply with new EU pollution standards; and PLN 15 billion investment in three new units, at Turow and Opole.

To date, investors seem not to buy the PGE story: over the past 12 months, shares in PGE have fallen 37%. 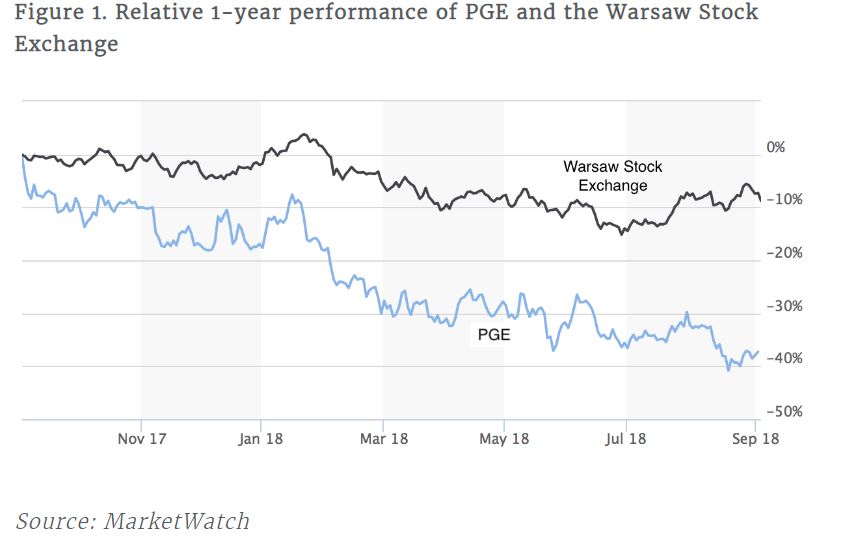 Referencing these findings, and the IEEFA report, shareholders asked PGE a series of questions about PGE’s carbon exposure, at the company’s annual general meeting in July.

First, the company seemed to misunderstand the size of its carbon exposure. When asked how coal divestment campaigns may impact PGE, the company stated that its “ongoing investments have a positive impact on reducing CO2 emissions”. Obviously, this cannot be the case, because PGE has just acquired a massive fleet of coal power plants from EDF, which can only increase carbon emissions.

These power price rises are not sustainable. The Polish energy regulator is presently investigating why they have risen so fast

Second, PGE was vague about the impact of rising carbon prices on investment returns. The company said that it expected to make returns on its PLN 1.9 billion coal power upgrade programme that exceeded the company’s cost of capital of 7.29%. When asked what impact a €10-higher carbon price would have on those returns, PGE stated that this depended on local, site-specific factors, as well as electricity prices.

While the latter is true, PGE will know its vulnerability to a rise in carbon prices, all else being equal, and investors will also want to know, especially given new forecasts that carbon prices could rise another 50% (or €10) by 2021.

To date, investors seem not to buy the PGE story: over the past 12 months, shares in PGE have fallen 37% (since Sept 5 2017), while the Warsaw Stock Exchange Total Return Index (WIG) is down 7%.

Those falls in PGE share price have come despite an extraordinary increase in wholesale power prices over the year to date, and especially in the past few months. Polish 2019 contracts for baseload power have risen by 24% since mid-June, or by about €11.4/ MWh, compared with about €4.4/ MWh higher carbon costs, for the average coal power plant, and €0.8 higher coal fuel costs (given various assumptions about coal calorific value and power plant efficiency).

In other words, power price rises have out-stripped similar rises in coal and carbon prices, and gross margins have risen as a result.

Closures instead of upgrades

But these power price rises are not sustainable. The Polish energy regulator is presently investigating why they have risen so fast, while the energy ministry has made sweeping changes to electricity trading, requiring all power trade to be made across exchanges in future, to prevent further “unjustified growth”.

We conclude that higher carbon prices are all but inevitable, while the same cannot be said for Polish power prices. The result will be squeezed profits.

Regarding its coal power upgrade programme, IEEFA has previously calculated that PGE was the single most impacted utility in Europe, from new EU pollution controls known as “Revised BREF”.

Already, PGE has invested hundreds of millions of euros in BREF compliance upgrades, and is planning hundreds of millions more. We estimate that last year alone, PGE invested more than PLN 300 million. As carbon prices rise, any prospect that PGE will make an attractive return on these investments diminishes.

PGE would do well to grab the chance to cancel further BREF investments, in favour of more growth-oriented strategies

PGE is already planning some diversification of its energy mix over the next decade. By cancelling some coal power upgrades, and accelerating investment into alternatives, it can reduce its exposure to rising carbon prices.

In its answers to shareholders in July, PGE left the door open to closures instead of BREF upgrades, at some coal units, stating that: “In the case of several locations, analysis is still on-going and final decisions have not been made yet.”

PGE would do well to grab the chance to cancel further BREF investments, in favour of more growth-oriented strategies which it has already started to identify in generation and services, for example in renewables, smart homes and electromobility.

This article was first published on the Energy and Carbon Blog. It is based on a post by Gerard Wynn and Paolo Coghe on the website of the IEEFA (Institute for Energy Economics and Financial Analysis) , published on 6 September 2018.

Gerard Wynn is an independent energy expert who regularly works for IEEFA and hosts the Energy and Carbon blog, with Gerard Reid.

Paolo Coghe is an international energy and financial economist and owner of the Paris-based independent consultancy Acousmatics.