Starved for Power, New Indian Government Translates "Chicken in Every Pot" Into “Solar on Every Roof”

Energy poverty is one 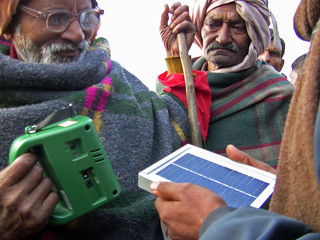 of the world’s greatest challenges. There are billions of people without access to reliable and reasonably priced electricity. In India, alone, there are some 400 million people in energy poverty. The new Indian government has set a major initiative to change this situation radically and rapidly: “to harness solar power to enable every home to run at least one light bulb by 2019″.

“We look upon solar as having the potential to completely transform the way we look at the energy space,” said Narendra Taneja, convener of the energy division at Modi’s Bharatiya Janata Party

This has the potential to change radically the situation throughout India. Access to even a few hours of light, for example, has had a major impact on the status of women as the lighting enables children to do their homework. A few hours of the lighting will equate to adding years of education to the poorest of Indians.

And, this is a very cost effective option. A solar lighting system costs in the range of 1-2 months of kerosene for an indoor lamp. Just on fuel costs, perhaps a 400 percent return in the first year — freeing up money for other things (whether food, education, or …) — along with reduced pollution (both indoor for health and larger scale climate / other impacts).

If successful, the political impact is hard to overestimate.

it’s hard to imagine politicians not understanding the appeal of bringing power to the people: every time they turn on the lights voters will be reminded of the BJP.

The markets are already assessing the implications. India’s electricity system is cumbersome, inefficient, and heavily dependent on coal imports. If the new government follows through on its promise, with renewable energy a cornerstone of its energy policy, expectations of increased coal exports might turn into a chimera.  As discussed at RENewEconomy,

For coal exporting nations like Australia, however – who have been forging ahead with the development of new mega mines and infrastructure in the belief that coal is the only solution to India’s booming energy needs – this news will not be welcome.

As far back as mid-2012, signs were already emerging that a rebirth in the development Australian coal infrastructure was masking huge problems in the Indian energy market, such as poor supply and pipeline infrastructure and the increasingly unviable cost of coal imports.

And as recently as January, leading investment bank HSBC warned that the market value of the coal assets owned by Australia’s biggest mining groups could be slashed by nearly half – or more than $US20 billion – due to constraints of the global “carbon budget;” a concept HSBC says is gaining traction, given the climate science, and the implementation of pollution control policies in the US and China.

A month earlier, in December, the International Energy Agency trimmed its five-year forecast of global coal use, warning that environmental constraints, financing issues, and the current cost of coal exportsraised “concerns about the economic feasibility of projects in the Galilee Basin.”

About 400 million people in India lack access to electricity, more than the combined population of the U.S. and Canada. The outgoing government led by Prime MinisterManmohan Singh missed a 2012 target to provide electricity to all households.

It’s important to remember that switching from kerosene lanterns to battery powered lanterns (no matter how the batteries are charged) is just trading one form of poverty for a slightly better one.

Prosperity comes from jobs (such as in a factory) in which human labor is multiplied using cheap grid power.  In developing nations such as India and China, nuclear power currently costs much less than grid power from solar and wind.

For example this Indian solar project and this Indian wind project both show prices of around $1 per peak Watt, or $3-5 per average Watt delivered.  This report shows nuclear power plants are being built in India for only $1.70/Watt, which suggests a capacity factor adjusted cost of $2 per average Watt, or about half the cost of renewables.  And that is before energy storage is added to renewables, which is not being considered in developing nations, due to the exorbitant cost.  Furthermore, the nuclear plant would last 60 years or more, whereas wind plants must be rebuilt in 20 years or so, and solar installations have unproven lifetimes.

Making matters worse for renewables, developing nations don’t have adequate existing fossil fuel grids to supply power at night or calm days, so the new fossil backup (most often coal powered) must be built, adding to the cost and environmental impact of variable renewables.  The often repeated claim that solar reduces peak demand, and therefore qualifies for a “capacity credit” which eliminates the need for fossil backup, simply doesn’t work at high penetration.  Big solar needs big backup because big clouds exist, and demand is often big in the evening.

Might I suggest that there is potential for combo of bottom up and top down.  Cleaning up / strengthening / even expanding ‘the’ grid can occur even as clean distribution goes in.

While still leaving people in energy poverty, compared to the United States, small solar can rapidly move in come close to eliminating total absence of electricity. That bump — from no electricity to limited electricity — has a huge impact on peoples’ lives.

The sort of few solar cells, phone charger, small LED lighting systems aren’t appropriate to hook into a grid, however.

Thank you for the substantive engagement.

Agree that a small solar/LED light/phone charger system is still energy poverty compared to developed world’s standards. However, as I understand it (seen studies, none at hand), that move up to energy poverty (from extreme energy poverty — or however it should be termed) has tremendous impacts from indoor pollution to increased educational achievement (especially among girls with all the positive social impacts resulting from that to increase economic activity (using cell phones for transactions) to …).  A few 10s of watts of solar with some hours of LED lighting is not the equivalent of plugging into the grid … but it is a meaningful step forward that is achievable rapidly at an affordable cost.

Re nuclear power — putting aside any other issues, this requires grid — and many (most?) of the 400 million people that we are talking about are not on — and typically not near — the grid.  Should they wait decades to make a leap from zero electricity to unlimited electricity too cheap to meter?

Re the last paragraph, outside the scope of this discussion to me …

PS — by the way, thank you for comment. Good example of thinking/laying out how developing country and developed world energy / electricity challenges both overlap and differ. Importance of taking time to understand commonalities and differences.

There is the averted kerosene cost — which I have seen at $5-10/month.

And, as to the D-Link, a quick link to something that I wrote several years ago. See http://www.thehindu.com/opinion/blogs/blog-urban-prospects/article470601..., for example, which suggests roughly a $US12 for a solar / LED light combo.