In 2020 , I wrote an article  called - "Southwest Power Pool(SPP) Grid Continues Move from Coal to Wind". In that article, I described the steady replacement of coal generation in the region by wind thru 2019. I mentioned that wind was catching up with coal rapidly and was coming close to surpassing it.

We now have an update showing the progress that was made last year and wind has indeed beaten out coal to become the top fuel supplier on SPP. 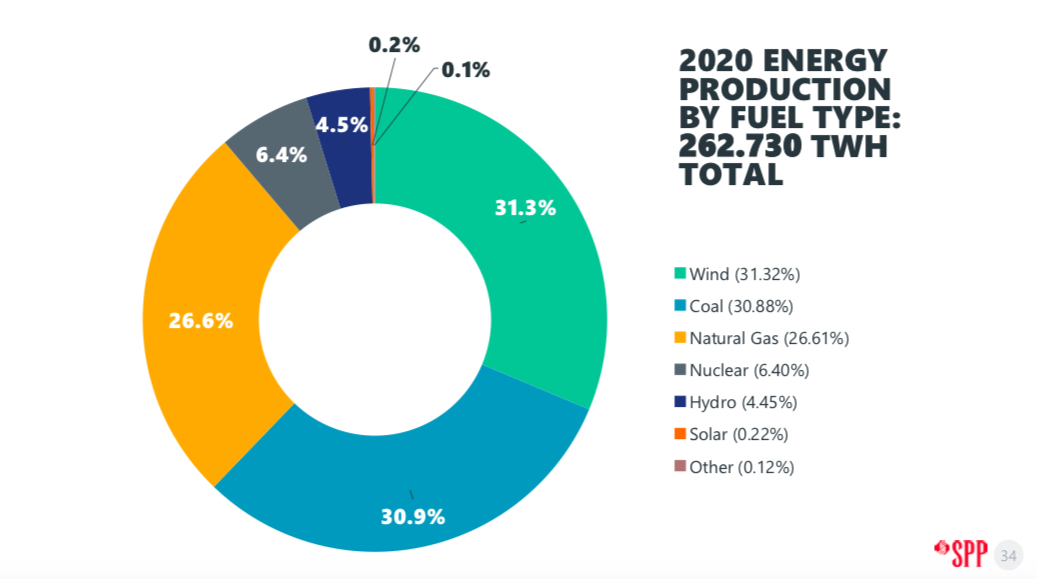 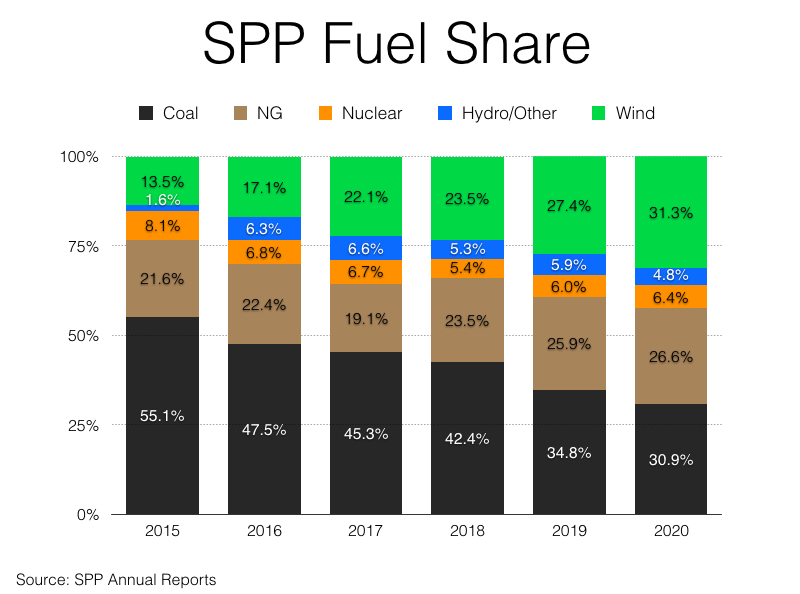 There is plenty of wind and solar under construction and/or in the queue for SPP so the question now becomes when does the share for fossil fuels coal/NG fall below 50%. I'm going with 2022.

Love to see the graphs!

One small point that jumps out-- why is the hydro/other bar shrinking marginally? It's only small drops year-over-year so it could be noise related to demand, weather patterns, etc., but I would think one of the strengths of hydro is that once it's built there's no reason to not continue to draw the power from the facility? Have there been retirements? Or is the drop more due to the 'other' part of the 'hydro/other'?

That was a drop Y-Y in Hydro generation - not sure why - maybe drought?

Another interesting parallel  data set to see would be the mix at summer and winter peaks with this.  Energy is obviously only one component, when that energy is delivered is another...I think this is great on the carbon front and where policy is driving, but also recognize that coal carried SPP through the last polar vortex from a reliability perspective.  Dealing with these lower probability, high impact capacity events will be critical.

Here is the quarterly report for SPP from last winter.  Normally, coal generation on SPP grid is a little higher in Winter and Summer and lower in Spring and Fall.

Besides the cold weather we also have increased NG prices this year - which probably contributed to increased coal usage.  For the year overall (2021) coal and wind share will be up on SPP grid and NG will be down substantially.

That's about 3.6% of the production switching to windpower each year; at that rate, in 16 more years, the remaining fossil fuel use would be gone, where it not for the "time&day of use" mismatch.  Maybe we'll address the mis-match and say that in 44 years (assuming adequate subsidies continue to be available), the SPP grid will be at 200% non-fossil, with the extra 100% being used to make hydrogen & ammonia.

Of course a lot would have to change between now and then, since the path of least resistance would be for increases in renewables to stop at around 60% penetration*, when the curtailment starts getting serious, and fossil gas in combustion turbines becomes the perfect solution to the remaining 40%.

* 60% is viable for the SPP, since their location in the US central plains has basically the best windpower resources in the world.  The rest of the country will do much worse.

That's about 3.6% of the production switching to windpower each year; at that rate, in 16 more years, the remaining fossil fuel use would be gone, where it not for the "time&day of use" mismatch.

Yep - pretty much what I was thinking as well.  There is quarterly data from first half of this year and it looks like fossil replacement in 2021 will be in that 3-4% range again with a big drop in NG caused by further gains in wind and some recovery Y-Y in coal.

Let's not forget that large parts of this region have good/great solar resources as well. 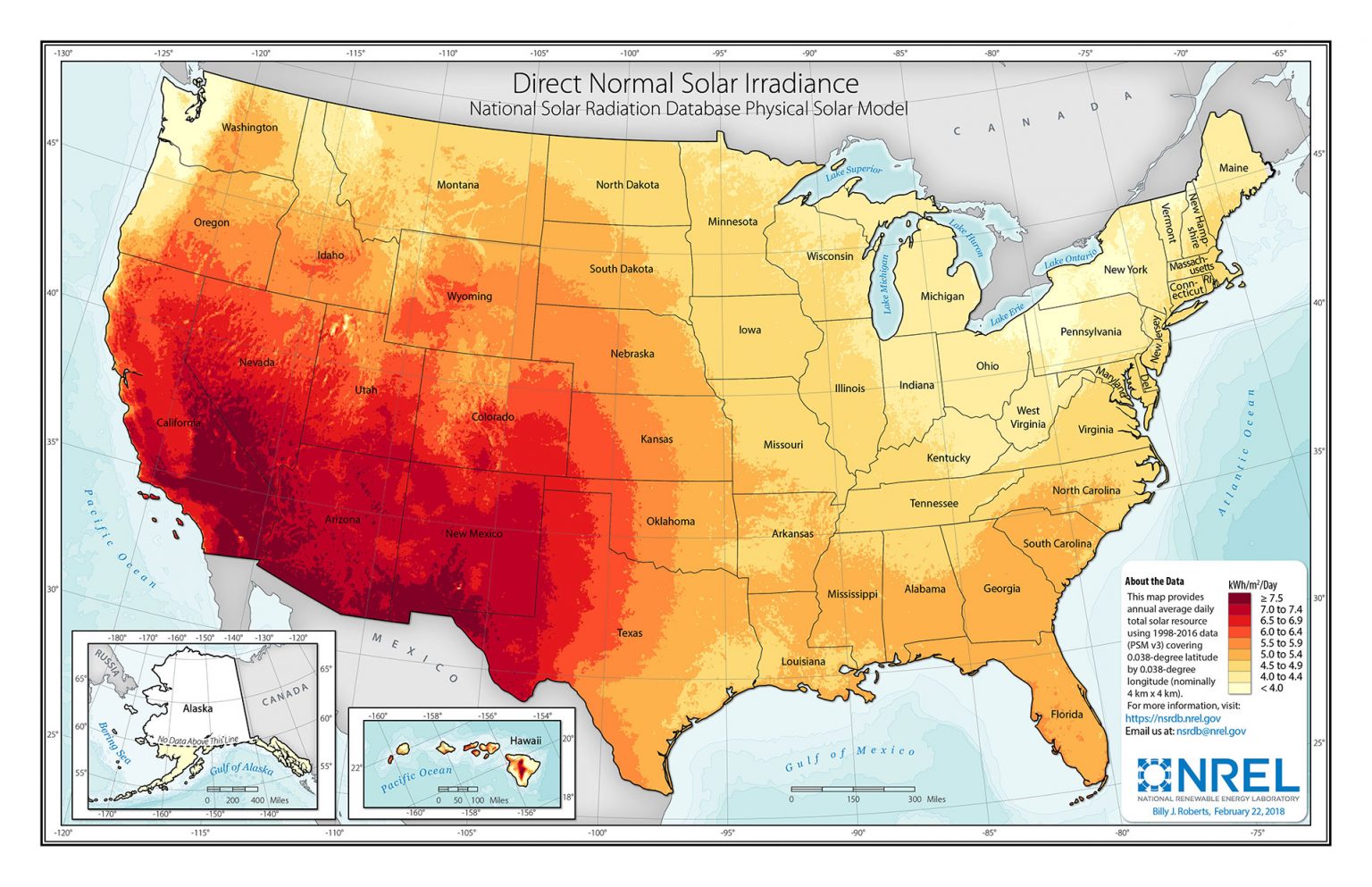 Skeleton Creek Wind will generate 250 megawatts of wind energy for Western Farmers Electric Cooperative, which will purchase all the project’s electricity ...

The other two phases of the project are expected to be completed by the end of 2023...

Maybe SMRs will grab the remaining 10% by that time?

Other than the "time&day of use" mismatch?  That is a huge issue.  Unlike in California and Germany, the growth of renewables in the SPP is driven by economics, not support from the public (which is weak).  The current Federal subsidy scheme is adequate based on low/mid renewable penetration, but more support will be needed to reach penetrations over 50% or so.

The reason is that electricity markets use the clearing price system.  With this system, all producers bid their marginal production cost (basically fuel cost, which is zero for wind & solar), the lowest bids are accepted in each time-slot until demand is satisfied, then all winning bidders are paid the highest accepted bid (not their own).

The result is that as more and more zero-fuel generation is added to the grid, wholesale prices fall whenever the sun shines and the wind blows.  Since nuclear has some fuel cost, it would actually benefit wind and solar producers to have a renewables+nuclear grid mix compared to renewables-only.  But it would be "more economical" for wind & solar (and nuclear) producers to be coupled with fossil fuel, due to its higher wholesale prices (hence we see phony claims that shutting down nuclear plants is economical - for other producers yes, but definitely not for electricity users).

Note that adding CC&S (or a carbon tax) to fossil fuel plants would drive up wholesale prices even more, including for wind & solar producers.  It will disproportionately hurt coal-fired plants, so we won't see either deployed much until coal's lobbying power is pretty weak.  Oddly CC&S and a carbon tax both have this effect; however it will be very easy for politicians to distort a carbon tax using fine print and special exemptions, so that only consumers are hurt by it.

That's why I think the sooner we start deploying fossil fuel with CC&S, the better.  A renewables-rich grid is likely going to be a fossil-fuel-rich grid.

but more support will be needed to reach penetrations over 50% or so.

Huh? I don't understand your math...

Would have been slightly higher with a normal hydro year.  There is already enough new capacity in system to insure that Zero Carbon reaches  45-46% share in 2021 and the generation data for first two quarters of year show this.

There are also wind and solar projects under construction that will come live in later in 2021 and in 2022/2023. So, why is more support needed to reach 50%?

As for your time of day comment - it appears you are ignoring solar/storage? Is there a reason for that?

Note: here is the current interconnection queue for SPP.