With roughly 18 months until launch, South Korea appears ready to create the world’s most ambitious cap and trade market, with the highest global price on carbon.

These findings jump from a Bloomberg New Energy Finance (BNEF) white paper analyzing how potential market designs could affect the nation’s carbon price and market efficiency, and are a reminder that global cap and trade could still be integral to combating climate change.

South Korea’s government is finalizing system design, set to launch in January 2015, but BNEF predicts it could ultimately cover 70% of national emissions and reach $90 per ton of carbon.

Criticism of the EU emissions trading scheme (ETS) centers on if it actually forces industry to cut pollution, but that won’t be the case in South Korea. “If the government implements the scheme without any changes, it will have major implications for Korean companies,” said Richard Chatterton of BNEF.

Over 450 entities participate in the country’s existing greenhouse gas inventory, covering more than 60% of South Korea’s emissions. These entities are all large-scale emitters, and submit annual emissions and energy consumption data to the government, which then sets reduction targets for the subsequent year.

BNEF’s projections assume the same entities would be covered by the ETS, and are based on South Korea’s emissions reductions target of 30% below current trends by 2020. This goal will require a 19% reduction from 2010 levels, and compared to Australia’s 14% and the EU’s 5% reduction target, make the Korean system without equal. 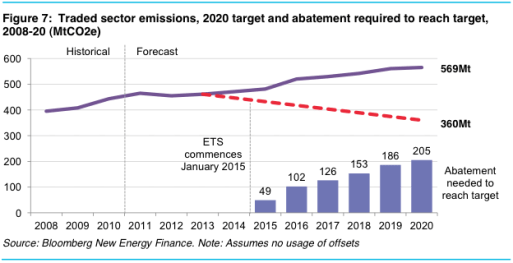 In order to meet its goal, BNEF predicts South Korea would need to cut its emissions by 836 million tons (Mt) of carbon relative to business-as-usual between 2015 and 2020.

Demand for emission reductions would thus rise to 200 million metric tons per year (Mt/yr) by 2020 – almost double demand projected for the EU ETS, even though South Korea’s program is only 20% its size.

But Reducing Those Emissions Won’t Be Easy

However, BNEF expects South Korea will face challenges meeting these goals. The proposed system design restricts the use of carbon offsets to 28% of reduction requirements up to 2020, and starting in 2021 only offsets from domestic projects would be eligible for polluters.

This tight offset market means South Korea’s ETS could be painful for the country’s industrial sector as they’re forced to buy permits or cut emissions. 598Mt of emissions reductions – nearly 75% of total cuts – will need to come from the industrial and power sector, meaning the cost of electricity and manufactured goods would rise.

Clean Energy Is A Clear Solution…But Not Short-Term

So if offsets are going to be at a premium, and much of the country’s energy efficiency potential has already been realized, where will South Korea’s emissions reductions come from? The clearest solution, as in most cases, is cutting coal-fired electricity generation.

BNEF sees the power sector offering the most abatement opportunities both short and long term. Short-term, the white paper estimates South Korea could reduce emissions in 2020 by up to 64Mt/yr by substituting natural gas for coal-fired power. This assumes natural gas generation utilization capacity rises from current projections of 27% in 2020 to 70%

In fact, BNEF predicts the ETS will feed into South Korea’s renewable portfolio standard to expand demand and boost renewable generation to 55 gigawatt-hours (GWh) in 2020 – a 700% increase from 2010.

Toward A Global Carbon Market Via South Korea

But the best way for South Korean polluters to comply with the ambitious reduction goals may not be within its borders – BNEF recommends linking to other functional carbon markets with an abundance of low-cost abatement options. 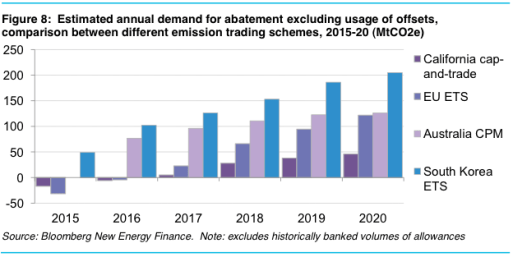 Linking to these two systems would benefit all parties. South Korea’s ETS will create demand four times greater than California’s system, and 60% higher than the EU-Australia scheme. Thus, South Korea reduces abatement prices by accessing cheaper permits from other systems, while boosting demand and whittling away surplus permit supply in other carbon markets.

Perhaps most promising in this equation, BNEF’s estimates don’t even consider China’s fledgling market. Seven regional pilot programs began rolling out this year, and they will cover up to 1 billion tons of emissions by 2015 before the country launches its own national system in 2020. Remember China is by far the planet’s biggest emitter of carbon.

Oh Wait, Industry May Have Its Day

Of course, these rosy scenarios hinge on the ETS unfolding as originally proposed, and that’s far from a certainty. South Korea’s government is consulting with large emitters this month, and they have called for many revisions to loosen the strict allowance, offset, and reduction policies.

The ETS “Master Plan” is due to be published in December 2013, and it will provide the legal basis for emissions reductions until 2018.

So South Korea, it’s decision time. Stay on your ambitious path, and cut emissions 30% while helping create a truly global carbon market. Or, water down the system proposal, and watch your national emissions climb 28% by 2020, according to BNEF – no pressure.

South Korea May Launch World’s Most Ambitious Cap And Trade Market was originally published on: CleanTechnica. To read more from CleanTechnica, join over 30,000 others and subscribe to our free RSS feed, follow us on Facebook (also free!), follow us on Twitter, or just visit our homepage (yep, free).

Korea is poised to take a leading eple in exports of energy efficient equipment and process technology. That is the real reason they are going to do this: to give their domestic industry a leg up in the huge international competition to decarbonize our energy economy worldwide.

I’m impressed. An article about S. Korea and global warming, which specifically talks about their power sector, and yet the author still manages to not mention nuclear power. This despite the fact that S. Korea has a very strong world-class nuclear industry, with a high (30-40%) and rapidly growing nuclear generation fraction, with a large number of reactors under construction.

Nuclear is the primary component of Korea’s plans to limit/reduce CO2 emissions, especially from the power sector. Despite all this, the author doesn’t even mention nuclear but does choose to mention plans for 55 GWh of renewable generation by 2020. My math tells me that that’s the equivalent of an average generation level of only ~6 MW!! That is, less than 1% the annual generation of a single nuke.