Everyone knows solar energy equals environmental benefits, but did you know solar also adds up to a competitive business advantage for some of America’s largest corporations?

US businesses are installing solar panels at breakneck speed to cut energy costs and improve their bottom line, according to the “Solar Means Business 2013” report from the Solar Energy Industries Association (SEIA) and Vote Solar.

A “Who’s Who” Of America’s Biggest Businesses

Since the inaugural Solar Means Business report in 2012, more than 1,000 megawatts (MW) of new solar photovoltaic (PV) panels have been installed on the rooftops of U.S. businesses, non-profits, and government buildings.

“The list of companies moving to clean, affordable solar energy reads like a ‘Who’s Who’ of the most successful corporations in America,” said Rhone Resch, SEIA President and CEO.

In fact, the 3,380MW of cumulative commercial solar PV deployment at 32,800 facilities across the US installed through the first two quarters of 2013 represent an increase of more than 40% compared to the same time last year.

While this solar boom for businesses has been wide, it’s also been deep. The 25 companies with the most total solar capacity have more than 445MW of generation installed at 950 different locations – enough to power 73,400 average homes and significantly more than 2012, when the top 25 companies only had 300MW at 730 facilities.

SEIA and Vote Solar contacted every company on the Fortune 100 list and collected data from public databases to compile the report, which only counts on-site PV systems directly supplying power to company facilities, not solar systems selling power to the wholesale electricity market.

So what’s driving this shift? As with most business decisions, it comes down to good economics – becoming more profitable through profitable projects with a quick return on investment. 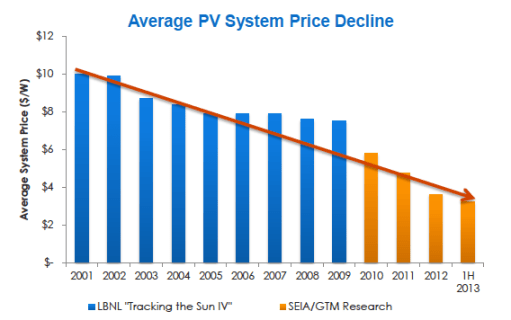 Installing solar also empowers companies to hedge against volatile utility prices. Once their rooftop solar system is installed or they finalize a solar power purchase agreement (PPA), a portion of their energy bills are locked in, and the company can focus on other changing costs of doing business.

But enough about why business are investing in solar, let’s take a look at which corporations are leading the charge. Unsurprisingly, Walmart dominates every major category in Solar Means Business, with 89.43MW of installed capacity (more than twice their closest competitor) across 215 total solar energy systems (60 more than the runner-up) in 12 states. 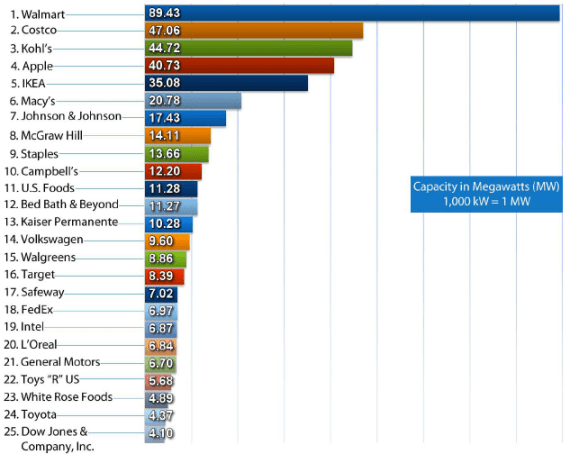 The only category Walmart doesn’t dominate is overall percentage of facilities on company facilities. IKEA took home those honors, with a whopping 89% of solar-powered facilities, good for fifth place in installed capacity with 35MW and sixth place in total installed systems with 39 in 20 states.

A majority of the top companies are Big Box brands, but some notable exceptions stick out, including Apple and Johnson & Johnson ranking fourth and seventh on total capacity, while Walgreens and Safeway ranked second and eight respectively on total installations.

Even though the report is prioritizes on-site systems that supply power directly to company facilities, SEIA also tips its hat to commercial real estate developers building solar but not consuming the generated electricity themselves. Developers like Prologis, with 79MW across 34 installations, often focus on strip malls and retail outlets, helping tenants go green.

Solar-Powered Businesses, Right Around The Corner

Solar power is definitely adding up to bigger profits for US businesses, but the biggest benefit of this fast-expanding market may also be normalizing the technology for consumers – perhaps why 92% of American voters support developing more solar energy.

117 million people in 30 states now live within 20 miles of at least one of the installations analyzed by Solar Means Business, meaning one in three Americans can potentially interact with a green (and profitable) business every day.

“For years, the promise of solar was always ‘just around the corner” added Adam Browning of Vote Solar. “Well solar has turned the corner and found itself on Main Street, USA.”