If you’re placing bets on which sector of the clean energy industry is primed for the strongest growth, you may want to slide a few more chips toward the smart grid. 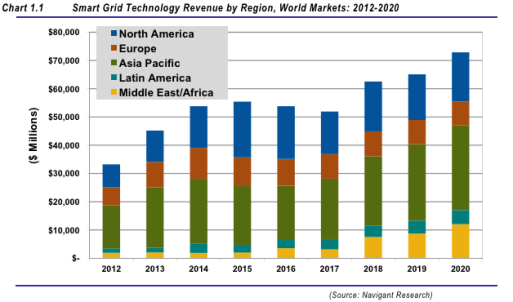 Smart grid technology is already a “colossal market” with $33 billion in global revenue in 2012, but it’s set to more than double by the end of this decade and hit $73 billion in annual revenue by 2020, according to a new Navigant Research report.

While any industry would gladly take a 10% annual growth rate, Navigant’s outlook may even underestimate smart grid market growth, because both the $73 billion annual revenue and 10% growth rate estimates don’t include Africa or the grid needs of its 1 billion people.

Unlike many other clean energy industries, smart grid’s growth underscores the diversity of its applications, which empower different technologies to lead different geographic markets depending on local energy network needs. Even in a single region, individual countries may have different local conditions, leading to a different smart grid application leading that market.

Navigant predicts the two largest smart grid technology markets will be located in North America and Asia-Pacific, spurred on by the drive to increase transmission infrastructure. Global transmission upgrades will represent nearly $250 million in revenue by 2020, more than half the overall market.

In North America, for instance, a substantial increase in high-voltage direct current transmission lines are boosting overall grid spending as a way to integrate large amounts of renewable electricity from remote generation locations onto the grid and reach large demand load centers like cities or industrial areas. North America is also expected to dominate microgrid growth through 2020.

An opposite trend is happening in many developing countries, where the focus is on building high-voltage transmission to get energy from newly built generation assets to new load centers that simply didn’t exist until recently. This trend is seen in India, China, Brazil, and Chile, where governments are trying to keep up with economic and population growth in areas accustomed to low electrification rates.

Beyond the overall increase in transmission projects, smart meters will also be an industry driver, but with much more volatility and uneven growth rates. Navigant notes North America’s smart meter market “has entered a valley” because US stimulus funds spending has ended and the next anticipated wave of meter spending from small utilities has not yet begun.

Add it all up, and Navigant predicts smart grid technologies will generate $461 billion in cumulative revenue from 2013 to 2020. But even all this growth still won’t saturate the market – many countries with populations greater than 100 million have seen little or no smart grid market growth, meaning as one market matures another will open up for investment.

Perhaps most promising though, is the potential for smart grid technologies to enhance existing energy systems to make them cleaner and more efficient while lowering the overall price tag. “Smart grid technologies improve the reliability and efficiency of the power grid via the application of modern IT capabilities alongside, or in place of existing utility assets and networks,” said Bob Lockhart of Navigant.

Smart Grid Market Revenue Will Hit $73 Billion Annually By 2020 was originally published on: CleanTechnica. To read more from CleanTechnica, join over 30,000 others and subscribe to our free RSS feed, follow us on Facebook (also free!), follow us on Twitter, or just visit our homepage (yep, free).