Should EPH, Betting on a Coal Power Future, Have Its Cake and Eat It Too?

EPH, the Czech energy company that bought Vattenfall’s German lignite assets, has joined a legal action against new pollution limits, writes energy finance consultant Gerard Wynn. Although EPH acquired the plants at a steep discount, and has profited from a sharp rise in wholesale power prices, the company apparently is still not satisfied, notes Wynn. It wants to be able to disregard EU-wide rules that protect people from air pollution and climate change. Courtesy Energy and Carbon blog.

When you buy something at a discounted price, especially from a seller who understands the asset well, most of us would accept there will be strings attached.

In the sale, Vattenfall gave away the power plants and lignite mines for free, plus some €1 billion in cash, and about €600 million to accrue under a subsidy scheme, called a lignite “standby capacity reserve”. At IEEFA (the Institute for Energy Economics and Financial Analysis), we calculated that the mines and power plants were worth more than €3 billion, even if they were all closed by 2030, something EPH will certainly hope to avoid.

Set against these €5 billion or so of assets, the lignite power plants and mines had liabilities worth €1.8 billion, chiefly an obligation to clean up the lignite mines and return them to productive use over time.

As it turns out, EPH did even better. By good luck, it acquired the generation assets without power hedges, and then saw an immediate rapid increase in German power prices which it could therefore take full advantage of (hedges would have capped its sale price).

At IEEFA, we calculated that the Lausitz lignite power plants and mines had average fixed and variable generation costs of about €24/MWh. We note that German year-ahead baseload power prices have risen from €27/MWh on the day of the sale, on Sept 30 2016, to €36 today (see chart below).

Assuming an average power price of €30/MWh, and operation of the 7,595 megawatts of power plants at an 80% capacity factor, we can estimate very roughly that EPH has generated cash of €370 million over the past 14 months. 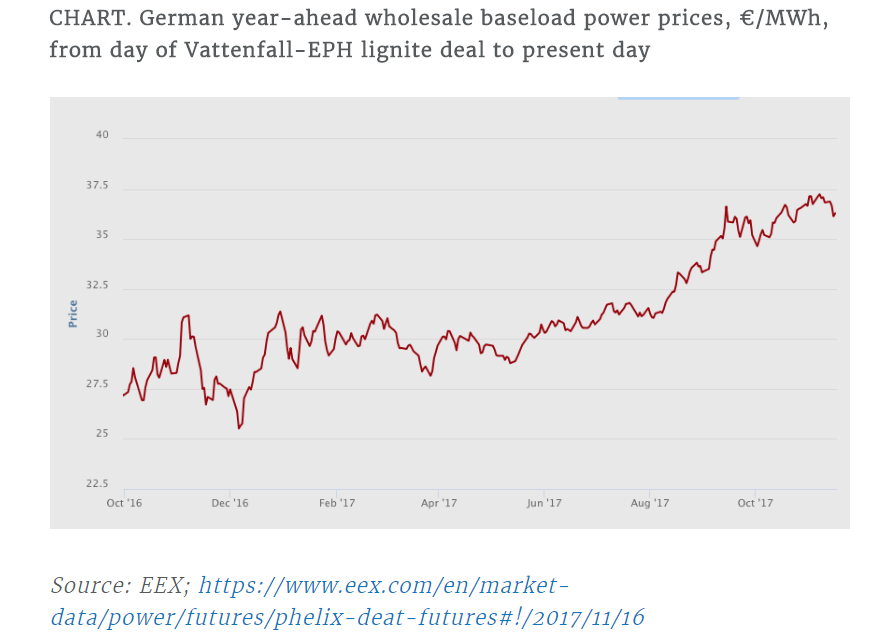 So much for the benefits of a discounted price. What about the strings?

Vattenfall spelled these out clearly, at the time of the sale.

Vattenfall Chairman Lars Norstrom stated: “The financial reasons (for selling) are obvious, given our views on current and expected price development and market conditions. Divestment is better than any hold scenario. We see some additional (future) regulatory and financial risks, such as additional costs for re-cultivation; additional cost for restructuring; additional, maybe costly, negotiations with different stakeholders in Germany; and an increasing scepticism among financial institutions regarding CO2-heavy industries.”

In other words, Vattenfall sold partly for strategic reasons, because it did not want to hold high-carbon assets, and partly because it expected further, costly, regulatory controls, given that lignite generation is a major source of emissions which contribute to air pollution and climate change.

Sure enough, less than one year on, in April 2017, EU countries voted by a narrow majority to introduce new limits on SOX and NOX emissions, to be implemented from 2021.

As IEEFA reported in a study published in May this year, emissions at the six units of EPH’s newly acquired Jänschwalde lignite power plant all exceeded the new NOX limits, implying extra (difficult to quantify) costs to upgrade the units. 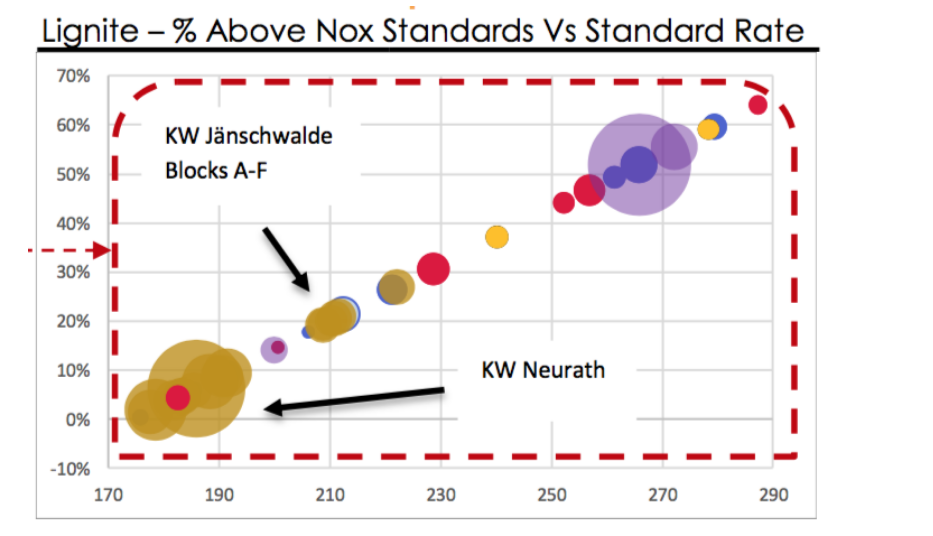 Responding to IEEFA’s report, EPH rejected the idea that Jänschwalde would be impacted, saying the new pollution controls were subject to “political discretion”.

However, as it happens, Germany has not gone to court to oppose them, so they will become law. Political discretion, right?

But EPH does not seem prepared to accept the outcome of this political and legal process. It has emerged that EPH is joining a group legal action against the new limits, on the grounds that the Jänschwalde power plant could only meet them using technologies “legally not covered by the EU decision”.

Given that EPH acquired the assets at a knock-down price, and by sheer good fortune (rising seaborne thermal coal and German wholesale power prices) has since trousered a windfall, can it really now be surprised to find that it will have to invest to upgrade, or close, this ageing asset, built in the 1980s?

It may be easier to argue that state compensation for the retirement of two of EPH’s 13 newly acquired lignite units was excessive, under Germany’s “standby capacity reserve”, in what might be a lesson for future plans for a managed coal phaseout.

EPH has become a specialist in acquiring distressed coal assets, thumbing its nose at the notion that coal is on the way out.

The launch on 16 November of a new “Powering past coal coalition” shows why these power plants are distressed. A coalition of 25 countries and regions committed to “united action to accelerate clean growth and climate protection through the rapid phase-out of traditional coal power”. Countries signing up included – in Europe alone – Austria, Belgium, Canada, Denmark, Finland, France, Italy, the Netherlands, Portugal and the United Kingdom. EPH will hope Germany doesn’t join them.

Gerard Wynn is independent energy finance consultant. This article first appeared on his blog Energy and Carbon and is republished here with permission.

You can’t eat the cake and have it.
In order to get political support from “The Greens” Frau Merkel went into the disastrous Energiewende.
But you can’t abandon nuclear and at the same tike save the climate.