The seven positive externalities of NEOTEC In Economics an externality is a side effect or consequence of an industrial or commercial activity that affects other parties without being reflected in the cost of the goods or services involved.

A 2015 report of the International Monetary Fund says global use of fossil fuels costs taxpayers and consumers $5.3 trillion per year and points out that this money has to be recouped from other sources or by spending less on other essential societal benefits.

Energy is essential for all for forms of life, for heating and cooling our homes, schools, and businesses, for lighting and powering our appliances and machines, and for transportation.

Prof Richard Betts of the UK Met Office says in a recent Guardian article that Global heating” is a more accurate term than “global warming” to describe the changes taking place to the world’s climate.

The First Law of Thermodynamics affirms that heat is a form of energy that can be transferred from one location to another and can be converted to and from other forms of energy.

The National Oceanic and Atmospheric Administration (NOAA) says, more than 90 percent of the warming that occurred over the past 50 years was in the ocean and that 63 percent of this was in the upper 700 meters and the remaining 3000 meters amassed the difference.

The revised  Resplandy et al. paper says this accumulation is currently at a rate of 1.21 ± 0.72 x 1022 Joules/year, which is 380 terawatts or about 21 times the current planetary consumption of primary energy.

The following graphic from the paper Energy system changes in 1.5 °C, well below 2 °C and 2 °C scenarios by researchers from the Grantham and Potsdam Institutes shows that global primary energy demand will increase by about 60 percent by the end of the century. 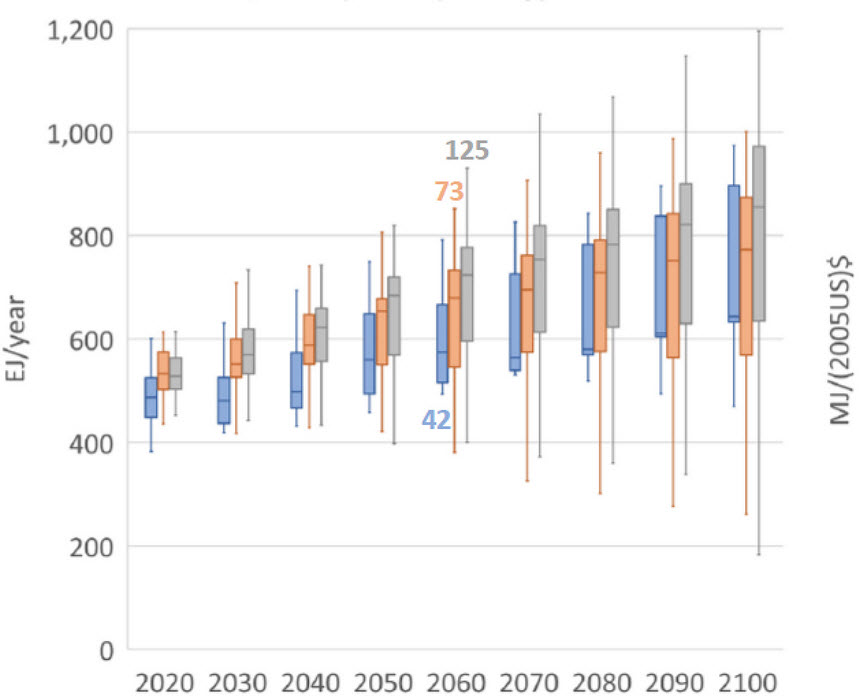 As the paper Negative-CO2-emissions ocean thermal energy conversion shows NEOTEC can convert 7.6% of the current warming heat to 28.8 terawatts, which is precisely the amount of primary energy needed by the end of the century according to the above graphic.

Heat sequestration - the remaining 351.2 terawatts moved from the ocean surface to a depth of 1000 meters is unavailable to fuel cyclones, wildfires, desertification or atmospheric rivers.

As NOAA notes, while the atmosphere has been spared from the full extent of global warming, for now, heat stored in the ocean will eventually be released, committing Earth to additional warming in the future.

With NEOTEC the committed heat becomes a new resource in 250 years as soon it returns to the surface at which time it can produce another 26.7 terawatts of primary energy and 324.5 another terawatts is returned to the deep.

Each 250-year cycle is a direct removal of the heat of global warming from the ocean to the land where the heat becomes an energy carrier like hydrogen and the waste heat of this consumption is radiated back into space facilitated by the accumulated depletion of greenhouse emissions over the preceding 250 years. 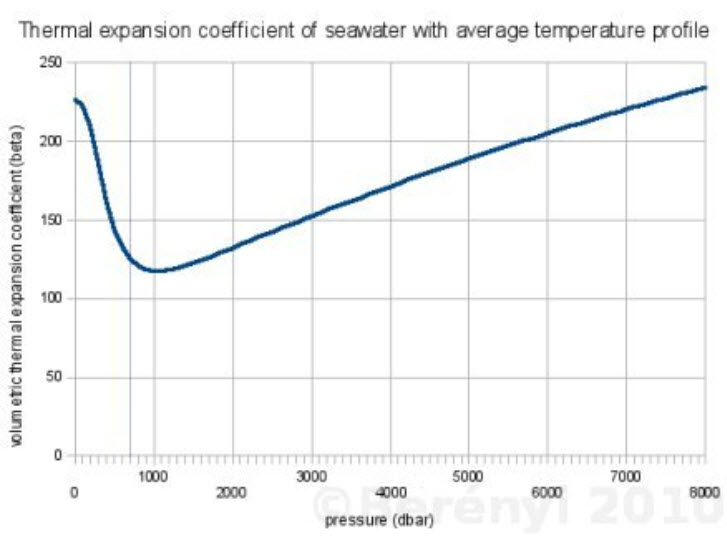 A universal one-degree cooling of the surface would decrease sea level rise due to runoff waters from ice caps and glaciers entering the oceans.

The combination of thermal expansion and volume increase of the ocean due to runoff is one of the greatest risks of global warming.

Albedo is the measure of the reflection of solar radiation out of the total solar radiation received by an astronomical body. As the following diagram by Dr. Hannes Grobe shows, ice reflects about 4 times as much solar radiation as water so, the melting of the ice caps and glaciers are contributing to global warming. 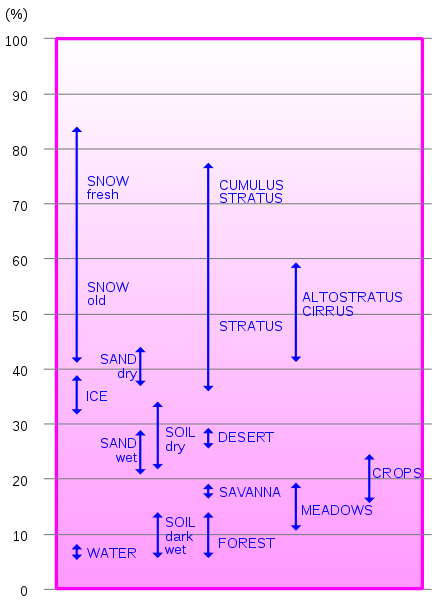 Carbon sequestration - each gigawatt of continuous electric power generated by NEOTEC consumes and stores (as dissolved mineral bicarbonate) approximately 5 million tonnes of CO2/year resulting in an indirect planetary cooling effect of about 2.5 gigawatts.

Ocean acid neutralization – the formula for the net reaction of NEOTEC as it converts carbonic acid and olivine to hydrogen, oxygen, magnesium bicarbonate and sand is:

For every 4 mole of CO2 being added to the ocean, 2 moles of magnesium bicarbonate neutralizes the added acidity of the oceans.

Ocean oxidation – a recent study by University of Washington and Stanford scientists shows about 252 million years ago nearly 90 percent of the planet’s species, including about 96 percent of ocean dwellers and 70 percent of terrestrial animals died off in what is known as the “Great Dying” that was induced by temperature-dependent hypoxia.

A series of volcanic eruptions in Siberia produced enough lava to cover the area of the United States to a depth of one kilometer deep and released enough greenhouse gas to increase surface temperatures by about 11C and dropped marine oxygen levels by 76 percent.

The implications of these findings according to the authors is: under a business-as-usual scenario by 2100 warming in the upper ocean will have approached 20 percent of warming at the time of the “Great Dying” and by 2300 it will reach between 35 and 50 percent.

If drastic action isn’t taken immediately the sixth great extinction will be soon upon us.

For every 4 moles of carbon dioxide being sequestered in the ocean by global warming, NEOTEC adds a mole of oxygen to the oceans that forestalls the eventuality of a second Great Dying.

The January, 2019, Scientific American article, Scrubbing Carbon from the Sky says that governments have been reluctant to foot the bill for negative emissions technologies, to say nothing of climate mitigation efforts in general, because of the ideological resistance to “picking winners”.

Did the allied governments during the great wars of the 20th century let ideological resistance stand in the way of winning those wars?

As Jose Harris notes in an article War and Social History:  Britain and the Home Front during the Second World War, the Second World War has come to occupy a unique position in modern British folklore. It is widely regarded as perhaps the only period in the whole of British history during which the British people came together as a metaphysical entity: an entity which transcended the divisions of class, sect, self-interest and libertarian individualism that normally constitute the highly pluralistic and fragmented structure of British society.

This transformation occurred on two levels, the practical and the moral.

To prevent a second “Great Dying” the citizens of the planet need to come together as a metaphysical entity.

Current divisions by class, sect, self-interest and libertarian individualism are tearing planetary society apart so a sustainable vision of the future is desperately needed.

As Scientific American notes, corporations have been reluctant to invest in climate mitigation because, until recently, they saw no marketplace. To them, fixing the climate is a public benefit, not something from which they can earn a profit.

The seven positive externalities of NEOTEC are profit centers by which all citizens can earn a profit while insuring the survival of their offspring.

These positive externalities can be our salvation.

They need to be reflected in the true cost of global warming.