Seeking Consensus on the Internalized Costs of Nuclear

Nuclear energy is the first energy option covered in this series where up-front capital costs dominate the overall cost picture. This requires a more precise estimation of effects such as financing costs, cost increases during construction and capital utilization rates (capacity factor). An example of the influences of these factors on the ongoing UK case is shown below. Thus, we have to take a very brief look at these cost elements before moving on. 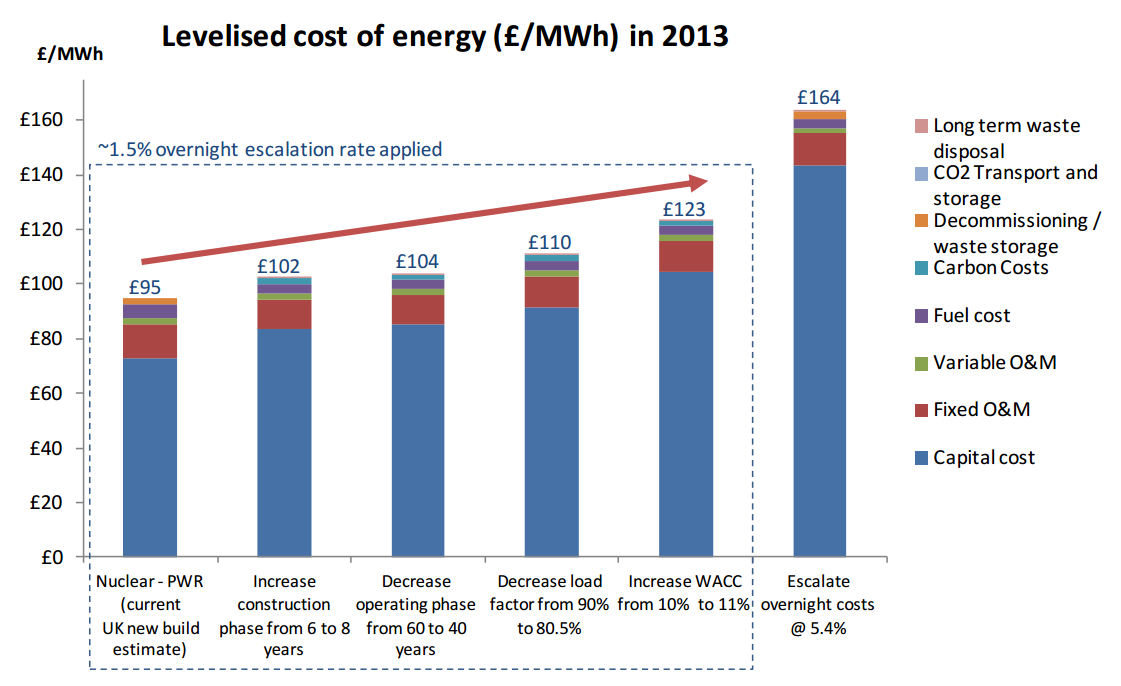 Financing costs have a very large influence on the economics of capital-intensive technologies. For example, the LCOE of a technology where all costs are in the form of an up-front capital investment with an expected lifetime of 50 years will increase by a factor of 5 if the discount rate is increased from 0% to 10%.

Financing costs (discount rate) for energy infrastructure typically consist of four main elements: the time-value of money (~0-6% to keep the financial system stable based on regional GDP growth rates), a risk premium (~1-5% to compensate for losses due to accidents or underperformance), operating costs for the financial sector (~1-2% estimated from mortgage rates relative to central bank rates), and some clean profits to investors. This study will exclude investor profits, but it should be noted that a technology will not be deployed if investors do not see a clear profit potential.

Nuclear power plants typically have long construction times. These years involve some financing costs even before the plant generates any revenue. In addition, nuclear suffers from a “cost escalation curse” as illustrated below for the rather extreme US case. This implies that, by the time that the plant is actually fully constructed, real costs are often significantly higher than original estimates. 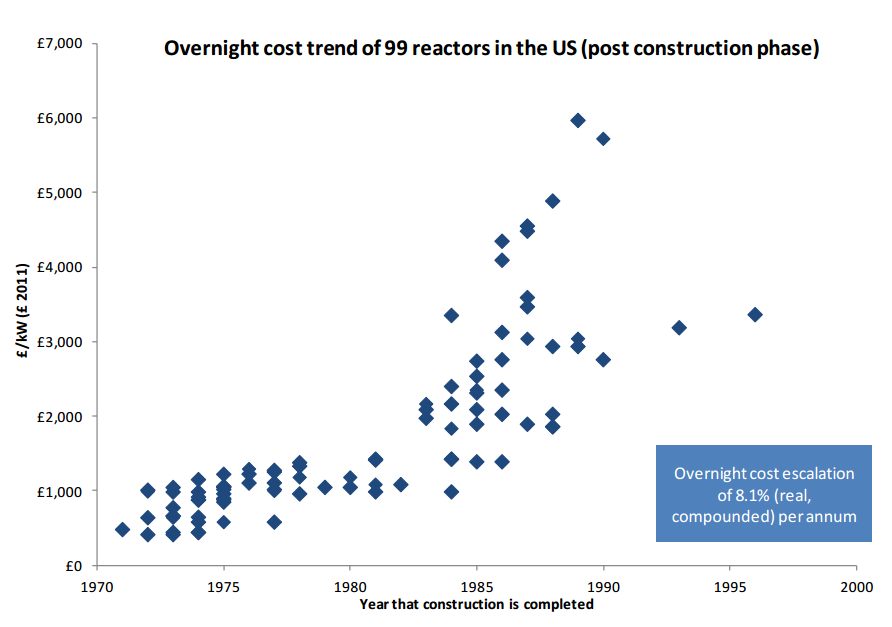 Given a certain discount rate for future electricity, it is obviously best to get as much value as early as possible out of a capital-intensive generating technology. The capital cost component of the LCOE is inversely proportional to the capacity factor, implying that halving the capacity factor would almost double the LCOE of a capital-intensive technology like nuclear. It is therefore understandable that the global average capacity factor of nuclear plants is generally quite high (below), affording little freedom for load following. 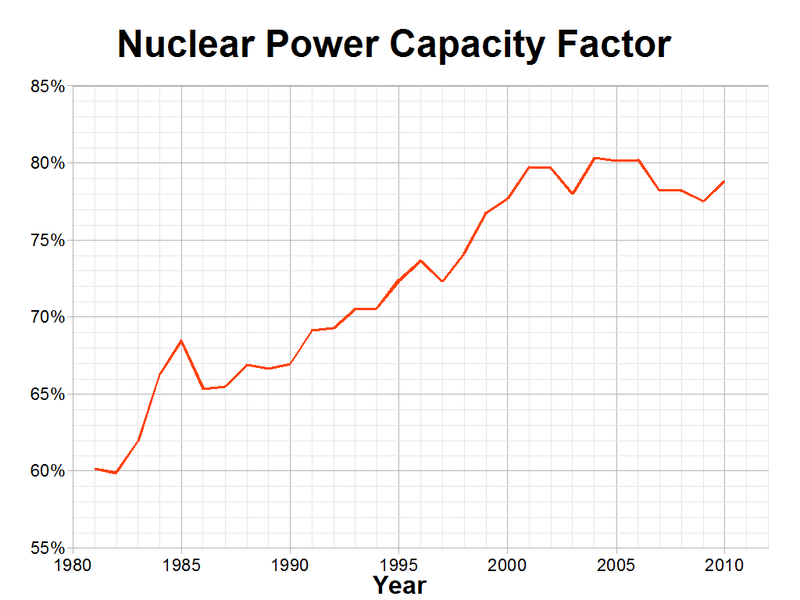 The costs of nuclear reactors vary greatly from case to case. Overnight capital costs of plants reviewed by the IEA ranged from $1556/kW in Korea to $5858/kW in the Czech Republic. Nuclear energy is currently exclusively used for electricity, but estimates for transport and heating will also be given below for comparison to other energy options.

The LCOE of nuclear power is given below as a function of the two most important variables: plant capital costs and financing costs. Other assumptions include a $10/MWh fuel cycle cost, O&M costs expressed as a linear function of capital costs based on data in the aforementioned IEA report (also roughly $10/MWh on average), a plant lifetime of 50 years and a 90% capacity factor. A high capital utilization rate is selected for fair comparison to other capital-intensive technologies enjoying priority dispatch. The Excel datasheet used to create this figure can be accessed here. 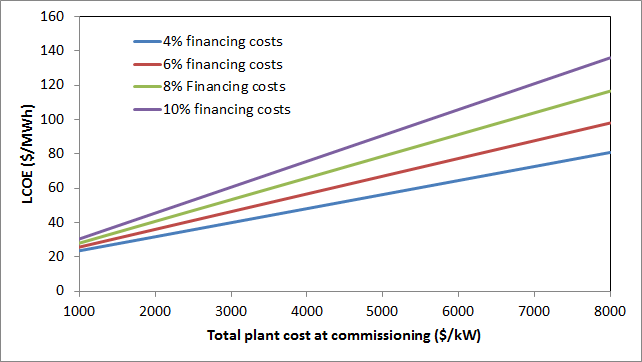 In addition, the effect of capital cost escalation under construction is illustrated below for several compounded escalation rates and construction times. The illustration is based on overnight costs of $4000/kW. 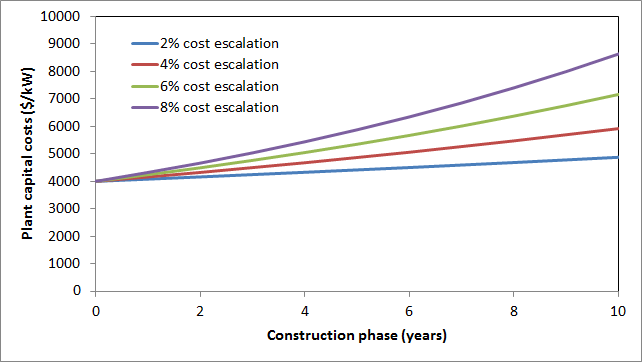 The cost of using nuclear-generated electricity for heat is given below. 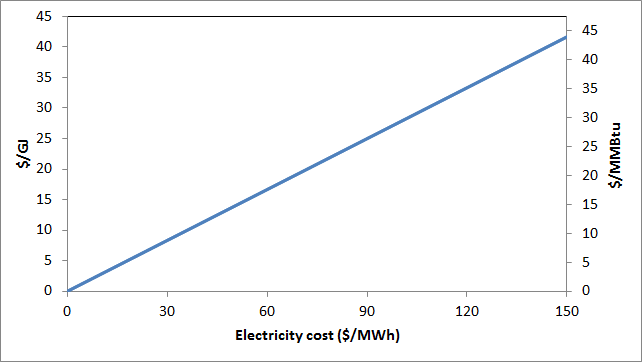 In order to facilitate an apples-to-apples comparison for transport costs from electricity sources, an estimate of power-to-liquids costs will be given here. Even though this article targets current internalized costs, estimated costs of mature (beyond 2020) power-to-H2 processes will be used. Assumptions include the following: $1500/kW capital costs, $60/kW/yr O&M costs, 15 year lifetime, 5% cost of capital and 70% conversion efficiency. A 50% synfuel production plant capacity factor will be assumed in a baseload-dominated system where synfuels will primarily be produced during low-demand periods at night and over weekends. 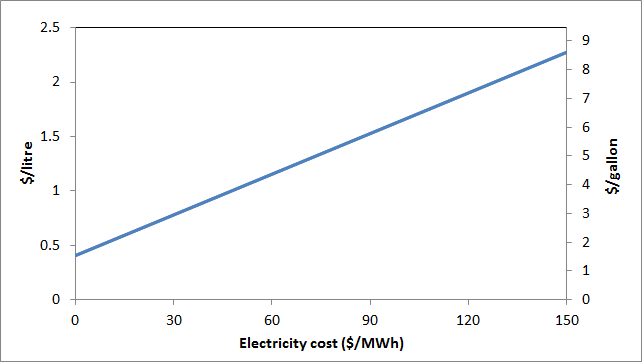 Numbers are based on PEM electrolysis in this report and Fischer-Tropsch syngas conversion numbers from this book. These costs are quite optimistic and show that the resulting synfuel costs are increasingly dominated by energy costs at an electricity cost beyond $40/MWh.