Seeking Consensus on the Internalized Costs of Energy Storage Via Synfuels

Before we get started, some general comments on energy storage economics are in order. As discussed in a previous article, the most important factors influencing the economics of specialized energy storage technologies are the capital costs and the capacity utilization. Capacity utilization is an especially important issue in energy storage because of a trade-off between capacity factor and the spread between the price at which the storage facility can buy and sell electricity. At higher capacity factors, the initial capital investment will be better utilized, but the spread between the buying and selling price will also reduce.

Germany currently offers a good example of the type of buy-sell spreads available in a system with substantial intermittent renewable energy penetration. As shown from the graph below, a buy-sell spread of about €20/MWh is available for probably about 20% of the average day while spreads of €50/MWh are only available on isolated occasions.

Aside from the price arbitrage example given above, energy storage can also be used for other services such as frequency regulation and T&D investment deferral. These are relatively low volume applications, however, and will therefore be neglected in this assessment.

Finally, it must be acknowledged that there exists substantial uncertainty regarding the economics of pre-commercial energy storage technologies like synfuels. Numbers utilized in this article are guided by data available from the review of DNV.

Hydrogen can be produced from electricity via the technologically mature alkaline electrolysis process. This process is fairly simple and flexible, but is used for only 1% of current hydrogen production because it is economically inferior to steam methane reforming which generally increases the produced hydrogen costs by a factor of 2-3 relative to the natural gas feedstock on a per unit energy basis.

In the medium-term future, the promising pre-commercial technology of Proton Exchange Membranes (PEM) could potentially reduce hydrogen production costs. PEM electrolysis is essentially a reversed fuel cell and is enjoying significant research attention. If optimistic projections of proponents are realized, it could potentially achieve high efficiency (~90%) hydrogen production from electricity at capital and operating expenses almost half that of the mature alkaline electrolysis process. PEM technology is more expensive than Alkaline electrolysis at present, however, so it will not be considered in this analysis.

The breakeven spread for P2G2P based on hydrogen is shown below as a function of capital costs and capacity factor. Additional assumptions include a 20 year lifetime, $50/kW/yr O&M costs, 40% round-trip efficiency, an electricity buying price of $20/MWh and a 5% discount rate. In practice, the higher capital cost estimates should be more realistic for a P2G2P energy storage system considering that every 30 hours of hydrogen storage capacity would impose capital costs of about $2000/kW and that the fuel cells for converting stored hydrogen back to power would also cost about $500/kW. Note that capital costs are given per kW of final electric output and are about double that of the costs per kW of hydrogen output due to the efficiency loss in converting hydrogen back to power. The Excel spreadsheet used to generate this graph can be downloaded here. 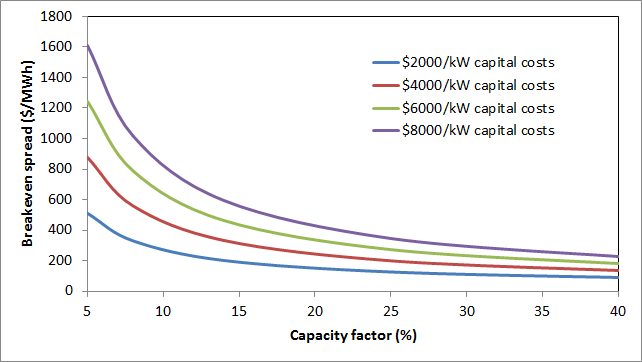 The above figure is repeated below for methane production using assumptions of a 20 year lifetime, $100/kW/yr O&M costs, 30% round-trip efficiency, an electricity buying price of $20/MWh and a 5% discount rate. Capital costs of gas storage and gas-to-power conversion are avoided because existing natural gas infrastructure can be used, but capital costs remain high when expressed per kW of electric output due to the very low efficiency of the process and the additional costs from the methanation (hydrogen-to-methane) process. 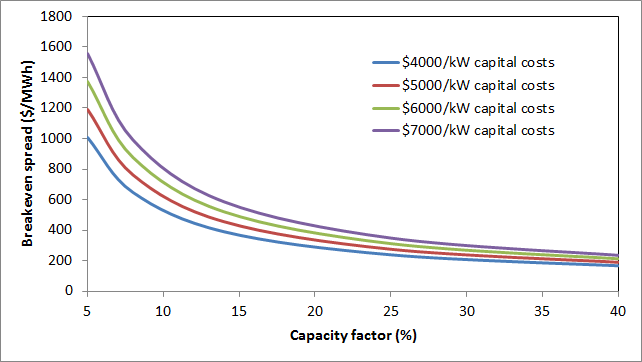 The DNV report also lists a surprisingly cheap biological hydrogen-to-methane pathway, but this process remains to be demonstrated at scale – traditionally a very challenging step for bio-processes. A 1MW demonstration project is currently running in Denmark and aims for completion at the end of 2015. The project uses standard commercial alkaline electrolysis technology to convert electricity to hydrogen and has a budget of about $9 million. When considering that P2G2P application of this process (30% efficiency) will reduce the output rate to 0.3 MW, the capital costs amount to $30000/kW, implying that this process cannot yet be considered as a viable option.

In general, the low efficiency and high capital costs of P2G2P processes impose some strong fundamental limitations on overall potential. The low efficiency will also greatly limit the capacity factor because process economics becomes very sensitive to the buying price of electricity. For the hydrogen-based P2G2P pathway which is also constrained by the local hydrogen storage capacity required, this becomes an even more serious issue.

At the low capacity factors that will be enforced by the restriction that only very cheap electricity can be used, the breakeven spreads required by P2G2P processes makes it much more expensive than the mature options of pumped hydro and compressed air storage systems. Future process development can bring down capital costs, but thermodynamics will always be against the P2G2P pathway for energy storage in terms of the overall process efficiency. This fundamental limitation will probably restrict this energy storage method to the hypothetical case where intermittent electricity is available in complete abundance (e.g. a technological breakthrough leading to super-cheap solar PV).

Removal of the restriction that the produced synfuel must again be used for power production opens up additional options for the synfuel energy storage pathway. Both hydrogen and methane can be utilized in several industrial processes and this can serve as productive utilization of intermittent electricity which would otherwise have been curtailed.

The most straightforward pathway is simply selling produced methane to the grid for general consumption in whichever way the free market sees fit. The economics of this option is expressed as the cost of the resulting synfuel in the figure below for different capital costs and capacity factors. Additional assumptions include a 20 year lifetime, $100/kW/yr O&M costs, 60% process efficiency, an electricity buying price of $20/MWh and a 5% discount rate. It is important to note that the 60% efficiency used here assumes the availability of a concentrated CO2 stream. If atmospheric CO2 is used, the efficiency drops to the low 40% range. The costs of methane production via P2F are also expressed per MMBtu for easier comparison to natural gas pricing. The Excel spreadsheet used to generate this graph can be downloaded here. 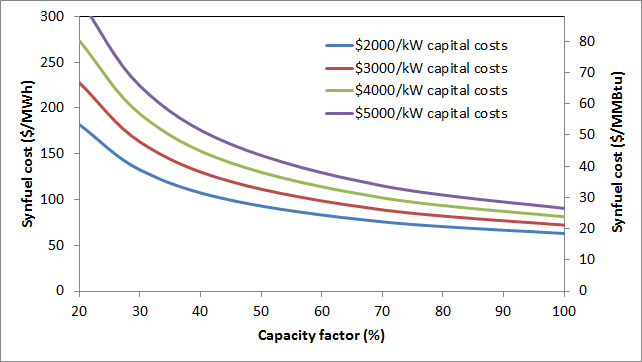 Given that capacity factors will probably be fairly low in order to exploit low electricity prices during times of abundant wind/solar energy, it is clear that some significant breakthroughs will be required before synthetic methane from electricity becomes cost competitive against natural gas. Countries like Japan which are dependent on LNG imports at $16/MMBtu could offer an early foothold for this technology though.

An alternative to natural gas would be the production of liquid hydrocarbons from hydrogen and CO2. Costs related to the modified Fischer Tropsch process needed for this purpose should be similar to the methanation process used for methane production above. Thus, the above figure will simply be repeated with the only difference being the expression of additional costs per barrel of oil equivalent for easier comparison. 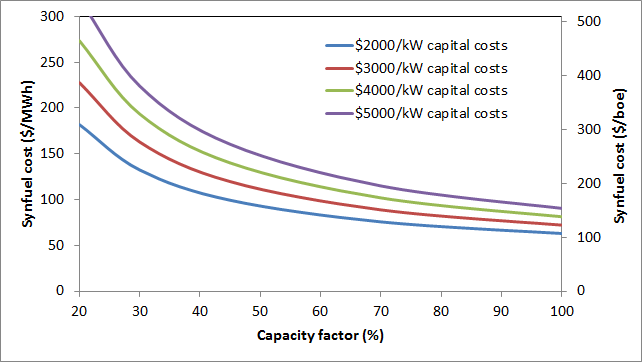 It is clear that the liquid fuel pathway appears to be substantially more promising than the gaseous fuel pathway. The simple reason for this is that oil is generally substantially more expensive than gas per unit energy ($110/barrel equates to $19/MMBtu – quadruple the cost of US natural gas). Even though operation at low capacity factors necessary to balance intermittent wind/solar output still results in costs exceeding the market price, the difference might be small enough for limited deployment in oil-importing countries with a high emphasis on energy security.

A third option for the P2F energy storage pathway is ammonia. This pathway would combine hydrogen with nitrogen instead of CO2 in the previous two examples through the mature Haber process. Costs are likely to be similar or even slightly lower than the hydrocarbon pathways described above. However, whereas gaseous and liquid hydrocarbon synfuels can be utilized by our existing economy with no alterations whatsoever, ammonia will require some changes, both in terms of practical implementation and societal acceptance. These challenges should not be taken lightly.

An additional potential benefit of the synfuel energy storage pathway is that it will create a large demand for CO2 which could lead to substantial deployment of CCS. Readily available concentrated CO2 will enhance the efficiency of carbon-based P2F operations by up to 50% and significantly cut capital and O&M costs, making this a highly attractive option. It should also be noted that the P2F pathway will only shave the peaks of intermittent wind/solar generation profiles and that thermal power plants (even with CCS) are likely to remain the most economical and practical option for filling the valleys.