Seeking Consensus on the Internalized Costs of Energy Storage via Batteries

Germany currently offers a good example of the type of buy-sell spreads available in a system with substantial intermittent renewable energy penetration. As shown from the graph below, a buy-sell spread of about €20/MWh is available for probably about 20% of the average day while spreads of €50/MWh are only available on isolated occasions.

The figure above illustrates this issue. As can be seen, significant spreads exist between weeks with high wind output and low wind output as well as between weekdays and weekends. These spreads are not economically accessible to battery technologies which should be cycled very frequently (at least once per day) to more economically utilize the limited storage capacity. In contrast, a pumped hydro facility with a week or more worth of storage capacity can take advantage of these spreads.

In addition to cycle frequency, cycle depth is also an important parameter in battery storage. Since the availability of high frequency spreads will vary significantly from one day to the next depending on fluctuations in renewables output and local electricity demand on weekly and seasonal timescales, the economically viable depth of discharge will also vary significantly. For example, batteries could be useful in Germany over summer when solar PV creates a reasonably reliable daily cycle, but will be of very limited use in winter when solar PV output is minimal and more unpredictable wind power dominates. 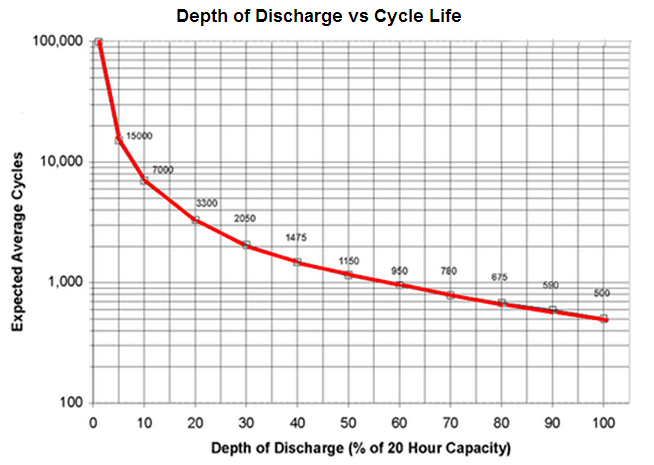 Another factor to take into consideration is that depth of discharge is often an important determinant in battery lifetime where shallower cycles can significantly prolong battery life (see above). In addition, battery lifetime is not only measured in cycles, but also in years. For example, reported Li-ion battery lifetimes range from 1000-10000 cycles and 5-15 years. At one cycle per day, 10000 cycles will take 27 years to complete implying that age-related degradation would probably have rendered the battery unusable long before the cycle lifetime is over.

Finally, it must be acknowledged that there exists substantial uncertainty regarding the economics of pre-commercial energy storage technologies like batteries. Numbers utilized in this article are guided by data available from the reviews of Duke University, the IEA and DNV. Various literature sources were also consulted to confirm that data in these reports is reasonable (Mahlia, Chen and Gonzalez).

Batteries are often the first thing that comes to mind when considering energy storage. Standard batteries are especially attractive to advocates of distributed renewable energy because they can be deployed on small scale.

Even though Li-ion batteries are making all the headlines, most deep-cycle batteries for renewable energy application are still based on mature lead-acid technology. These batteries have the advantage of low up-front costs (~$150-200/kWh at most wholesalers), but have relatively short lifetimes, relatively high temperature-sensitivity, significant maintenance requirements and significant waste-handling challenges.

The breakeven electricity price spread for lead-acid batteries is given below as a function of the average depth of discharge and the capital costs. Other assumptions include a 2000 cycle service life with no degradation, 75% round-trip efficiency, an average of 1 cycle per day, balance of system costs of $150/kWh, O&M costs $20/kWh/yr, an electricity buying price of $30/MWh and a 5% discount rate. Balance of system and O&M costs are not often considered, but, just as is the case with solar PV will probably become a very important factor as battery prices fall. These costs are taken on the lower edges of the ranges given in the Duke University review. The Excel spreadsheet used to create this figure can be accessed here. 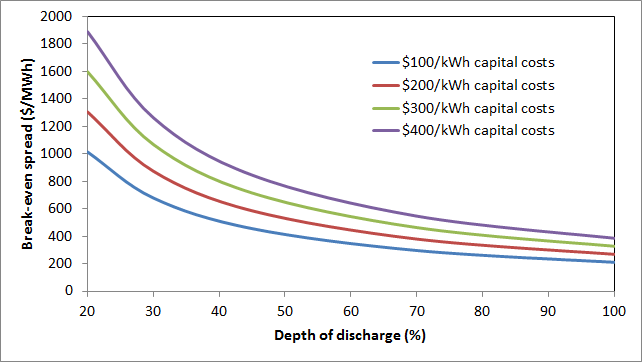 Given that most suppliers recommend a maximum depth of discharge of around 50%, it is clear from the above figure why deployment of lead-acid batteries for energy storage is very limited. Even under the lowest cost assumption, a 25% average depth of discharge requires an enormous breakeven spread of $800/MWh.

Li-ion batteries are not yet commonly available as solar backup options. One online supplier sells these batteries for around $1000/kWh which is much more expensive than lead-acid batteries. Tesla-manufactured batteries offered by SolarCity also appear to be in that price range. In exchange, Li-ion batteries offer longer lifetimes, lower maintenance requirements and higher round-trip efficiencies. The above figure is repeated for Li-ion batteries below under the assumptions of a 5000 cycle service life with no degradation, 90% round-trip efficiency, an average of 1 cycle per day, balance of system costs of $100/kWh, O&M costs $10/kWh/yr, an electricity buying price of $30/MWh and a 5% discount rate. 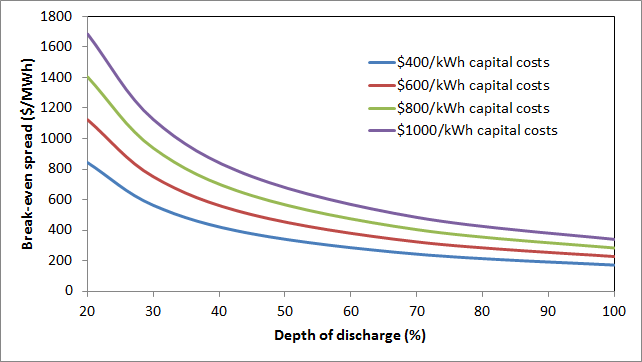 The figure shows that, thanks to the longer lifetime, lower maintenance costs and higher round-trip efficiencies, Li-ion batteries at $400/kWh have slightly better economics than lead-acid batteries at $100/kWh. Thus, if deep cycle Li-ion batteries for energy storage applications come down to $400/kWh, the choice between Li-ion and lead-acid will depend primarily on the locally applicable discount rate.

It is clear from the two figures above that battery storage is still about an order of magnitude from being economically viable given the price spreads available in wholesale electricity markets (around $50-100/MWh). However, sufficient subsidization could make batteries a viable option for early adopters in countries where household electricity prices are exceedingly high and feed-in tariffs are being reduced to limit deployment. For example, German households currently pay around $400/MWh for electricity and receive around $180/MWh as feed-in tariff for solar power fed back into the grid. Households can therefore avoid up to $220/MWh by storing more solar energy for self-consumption instead of selling it back to the grid.

This spread will further increase in the future, but will likely remain too small to drive significant deployment for the foreseeable future in the absence of subsidies which are substantially more lucrative than those currently in place.

Flow batteries, Vanadium Redox Flow Batteries (VRB) in particular, are attractive due to their very long lifetimes even under consistently high discharge depths, their good scalability, and their flexibility in managing power and storage capacity separately. They are generally not suitable for small-scale applications, however, and are therefore targeted more towards grid-scale energy storage. Drawbacks include fairly average round-trip efficiencies and significant O&M costs.

The breakeven spread for VRBs is given below as a function of the capital costs and depth of discharge. Other assumptions include a 14000 cycle service life with no degradation, 75% round-trip efficiency, an average of 1 cycle per day, balance of system costs of $150/kWh, O&M costs $30/kWh/yr, an electricity buying price of $30/MWh and a 5% discount rate. The Excel spreadsheet used to create this figure can be accessed here. 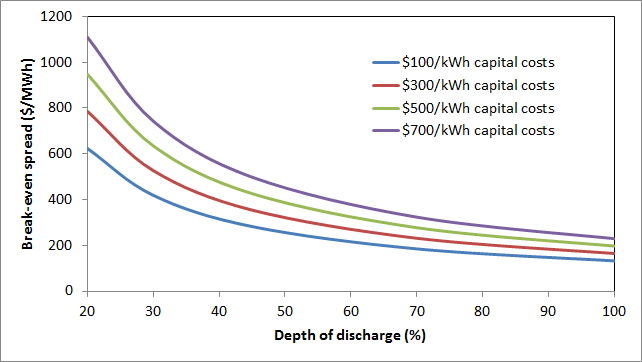 When considering that VRBs can be discharged to 95% without any significant ill effects on lifetime, the figure above starts to look somewhat more promising. Naturally, the average depth of discharge achieved in practice will be much lower than 95%, but this will still improve the economics of VRBs relative to lead-acid and Li-ion batteries which should not be discharged beyond 50%. That being said, however, VRBs remain several times more expensive than pumped hydro storage analysed in the previous article even under the most optimistic cost assumptions.