Seeking Consensus on the Internalized Costs of Energy Conservation

What qualifies as energy conservation?

There are several examples of grey areas between efficiency and conservation. One such example is a thermostat for home temperature control. When you install a smart thermostat, it will automatically conserve energy during certain appropriate times (e.g. when no-one is home), implying that it could be seen as a conservation mechanism. However, since smart thermostats are a technological solution for reducing energy consumption, it qualifies as an energy efficiency measure in this series. The act of turning your thermostat down a couple of degrees qualifies as energy conservation.

The formal definition of energy conservation used in this series is the following: “Reductions in energy consumption achieved through behavioural choices which have a negligible or positive effect on the number of happy life years achieved.” Energy conservation mechanisms which will obviously compromise health or happiness are therefore excluded from this analysis. As the graph below shows, however, this definition still allows for a lot of application in richer nations. 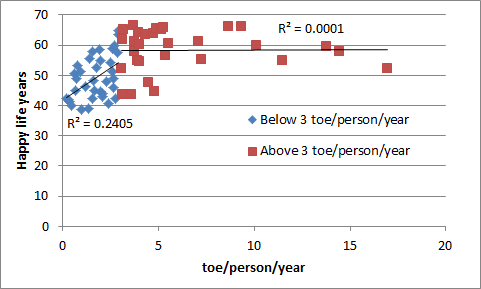 While happy life years (life expectancy times a subjective wellbeing score) do correlate with energy consumption in poor nations, essentially zero correlation exists above an average energy consumption of about 3 tonnes of oil equivalent per person per year. This implies that increasing energy consumption above this point is essentially futile in the never-ending pursuit of happiness and longevity. Society is slowly starting to grasp this point, but the transition from primitive material desire to more evolved intellectual and spiritual motivation remains at a very early stage.

In the above graph, energy data was taken from the BP Statistical Review, Happy Life Year data from the Happy Planet Index and population data from Wikipedia.

Choosing a home that is moderately smaller than the 1771 sq ft US median will not result in any measurable reduction in happy life years. In fact, happy life years may well increase due to large savings which can be spent on other more important things and an overall reduction in clutter and maintenance requirement.

Under the assumption that the decision to opt for a smaller house is driven primarily by a desire to reduce environmental impact and increase energy security, the effective $ savings per MWh of electricity equivalent energy conserved will now be estimated. $ savings comprise of home capital costs ($118/ft2), maintenance costs of 1% of the capital cost, and insurance costs amounting to just under 0.5% of capital costs. MWh savings will be calculated based on yearly primary energy consumption of 45.5 kBtu/ft2 and embodied energy of 700 kBtu/ft2. Energy savings are expressed as more familiar electricity savings by dividing the primary energy saving by a factor of 2. The full calculation is available in Excel format here. 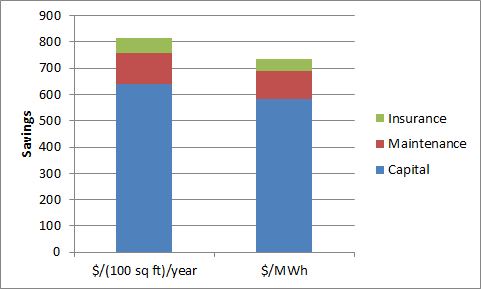 As shown in the graph above, each 100 sq ft reduction in home size can bring savings amounting to $800/year. This equates to a saving of over $700 for every MWh of electricity conserved in this manner. For perspective, it should be noted that this saving is more than an order of magnitude greater than the cost of conventional electricity generation options covered earlier in this series.

Downsizing the car is just as effective at conserving energy as downsizing the house. Smaller (lighter) cars obviously use less fuel and also require less energy in the manufacturing process. 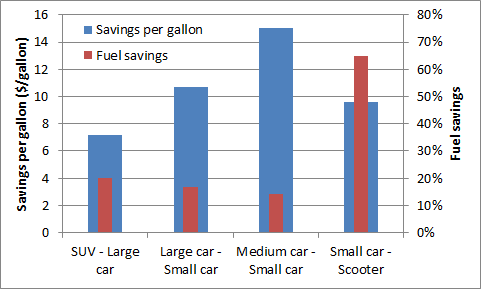 As can be seen from the graph above, shifting down one size class in your new car can lead to 14-20% in energy savings at a bargain price of minus $6-12/gallon. Trading in your small car for a scooter can result in a whopping 65% energy saving at a cost of close to minus $8/gallon. Naturally, overlooking a small car for a scooter (or, even better, a bicycle or e-bike) will be impractical for many people, but for those who have successfully set up their lives for practical environmentalism, this can be a source of large savings (both in terms of money and energy).

DATA: LCOE of energy conservation: -$300/MWh. Although this is very hard to estimate with any degree of accuracy, it could be somewhere below half of the savings associated with downsizing the house as in the example in the article.

DATA: This assumption can also be extended to heat. When -$300/MWh is converted to costs per unit of primary energy by assuming a multiplication factor of 2 between electricity and heat, the cost amounts to -$42/GJ.

DATA: Cost of energy conservation in transport: -$6/gallon. This is taken to be the smallest number in the example in the article.

There can be substantial secondary societal savings / benefits associated with the kind of lifestyle changes described above.

Higher population density in urban areas increases the financial viability of public transport, and reduces the need to own and run a motor vehicle especially for those living in larger towns.

With appropriate town planning combined with relatively dense urban housing as has been widely practiced for many years in countries such as Denmark, Germany and the Netherlands, many more journeys become viable by bicycle, public transport, or on foot. This tends to reduce vehicle ownership, and distance driven as well as cutting the amount of required infrastructure expenditure to support vehicle use – less need to expand roads, to build parking facilities etc.

In many larger European cities, a substantial proportion of the population sees no reason to own a motor vehicle as public transport is good, and local journeys to fetch daily necessities such as food can easily be accomplished on foot, or by bicycle on extensive networks of well built, safe, foot paths and cycle tracks.

As an example, in Copenhagen in 2012, 36% of journeys to work or education were accomplished by bicycle – also in the process, greatly improving public health and fitness, reducing obesity, and cutting working days lost to ill health.