Leading strategy and future direction for the municipal utility of the nation's most vibrant tech and entrepreneurial hub.

Two studies exploring the potential of shifting from fossil fuel to clean hydrogen as fuel to power medium-and heavy-duty vehicles are getting underway, led by a team from Seattle City Light, Pacific Northwest National Laboratory (PNNL), and Sandia National Laboratories. These efforts are supported by two awards from the U.S. Department of Energy (DOE) totaling $2.12 million to help meet emission reduction goals set by Seattle City Light and the Port of Seattle. The study team also includes partners at The Northwest Seaport Alliance (NWSA) and PACCAR/Kenworth.

“The impacts of climate change are evident across ecosystems and cultures around the world. The ability to incorporate clean hydrogen in our energy portfolio will be key to enabling the Port of Seattle and NWSA to meet our commitment to be carbon free by 2040,” said Fred Felleman, Port of Seattle Commission President, Managing Member and Co-Chair of The Northwest Seaport Alliance. “We thank our partners at City Light and the Department of Energy along with PACCAR/Kenworth for helping us to build back better together.”

Supported by DOE’s Hydrogen and Fuel Cell Technologies Office under the Office of Energy Efficiency and Renewable Energy, the studies include:

Unlike coal and oil, hydrogen can be used to store renewable energy in a simple, sustainable cycle. This hydrogen is produced by using clean and renewable energy (like hydroelectricity, solar and wind) to apply an electric current to water using a device called an electrolyzer, producing pure hydrogen and pure oxygen, with no other emissions whatsoever. The versatile hydrogen that is produced can then be stored, used as fuel or converted back to electricity by a fuel cell, effectively creating a backup system to power critical loads or support the electric grid. This flexibility supports resiliency, which is an essential component of the design being studied to ensure that the system could help to support port operations during an extreme event that causes disruption to the grid.

Clean hydrogen fuel is expected to play a significant role in reducing greenhouse gas emissions, particularly in some of the more hard-to-decarbonize maritime and trucking industries. Hydrogen production and hydrogen-fueled medium- and heavy-duty vehicles are a possible solution for shifting some of these uses off fossil fuels, with potential benefits that will continue to grow with the project itself. For City Light General Manager and CEO Debra Smith, examining adding clean hydrogen fueling to the utility’s expanding energy portfolio is another example of how it is working to diversify its customers’ choice of energy.

“As our industry has evolved, so has the demand from our customers to meet their specific energy needs with sustainable and environmentally responsible power. It is more important than ever for Seattle City Light to collaborate with our customers who want to confront the climate crisis by decarbonizing their operations,” Smith said. “We are excited to partner with these agencies to implement a cleaner future for our customers at the port and our region as a whole.”

While hydrogen fueling systems are still new in the Pacific Northwest, they are currently used elsewhere along the North American West Coast, in California and British Columbia and at ports and cities throughout Europe with significant pilot projects and commitments in Asia. Part of the project goal is to make hydrogen-fueled vehicles as safe as those on the road today. To make clean hydrogen a safe, cost-effective and available alternative to fossil fuels, a lot of research, analysis, planning and investments are required since it requires a completely different fueling approach than conventional gasoline or diesel. The multi-agency work underway in Seattle today aims to evaluate the feasibility of developing clean hydrogen fueling as a potentially big step in the transition away from fossil fuels.

Team members from PNNL and Sandia are contributing research and planning expertise to many parts of these exploratory projects.

“We are evaluating the optimal scale of the system, customized to the potential current and future energy needs of the Port of Seattle,” said Philip Jensen, PNNL engineer and project manager. “Optimizing the system could avoid costly electricity transmission upgrades, while deploying new clean energy vehicles and equipment, and potentially even providing back-up power to essential city services in the event of temporary power loss. PNNL is proud to partner with Seattle City Light and the Port of Seattle to help accelerate their transition to a clean energy future.” 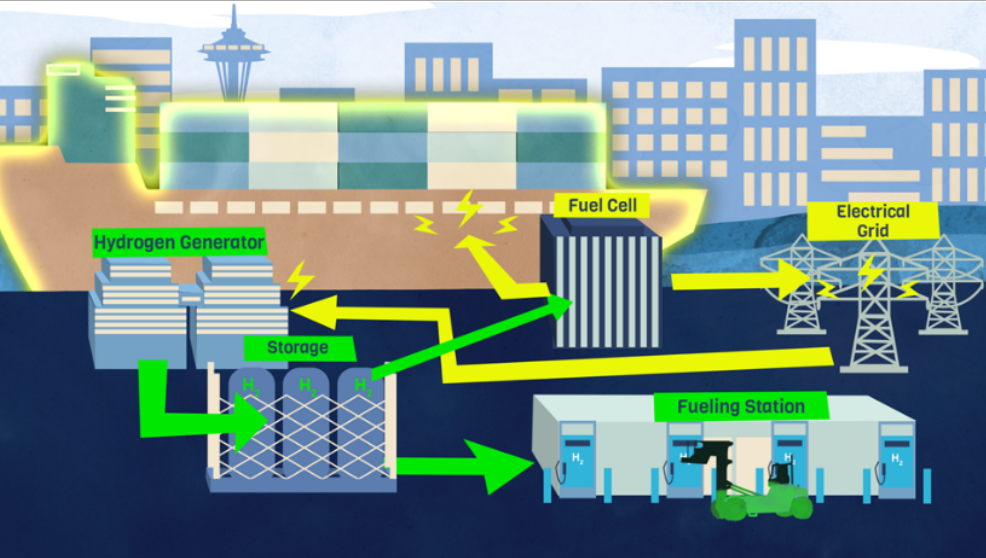 The ports in Seattle and Tacoma through The Northwest Seaport Alliance are planning for a clean energy future. One possible strategy is for zero-emission green hydrogen to be produced and stored to fuel heavy-duty vehicles at new fueling stations. Once hydrogen infrastructure is in place, planners envision using it to generate on-demand shore power for ships at berth to replace burning of diesel fuel, or charging electric powered tugboats and other vessels. Hydrogen even has the potential to power a mini-electric grid at the Port, providing crucial backup power in the event of a natural disaster. Click here or on the image to view the animation.
(Animation by Sara Levine | Pacific Northwest National Laboratory)

The hydrogen fuel can be stored in tanks for weeks to months with minimal energy loss, which may not be possible with short-duration energy storage methods like batteries. This makes hydrogen a good solution for decarbonizing some energy loads that aren’t ideal for battery energy storage. The stored hydrogen can power vehicles ranging in size from light-duty trucks to heavy equipment at ports such as forklifts, drayage trucks and even cranes. The team is also exploring the concept’s scalability if future demand for hydrogen increases, including the potential to use the energy stored as hydrogen to power cruise or cargo ships while they’re being loaded and unloaded. Further, PNNL and Sandia experts will contribute expertise to help evaluate all the considerations needed to ensure future clean hydrogen use can be safely stored and handled while meeting the latest safety standards.

The Port of Seattle, along with partners from the NWSA and City Light, are also currently underway with planning for a full range of future energy needs across the Seattle harbor, through an effort called the Seattle Waterfront Clean Energy Strategy. The results of the PNNL studies will be an important input into that broader effort.

The team is projecting a two-year timeframe to produce the final project recommendations. City Light, PNNL and Sandia National Laboratories will continue to provide updates as significant milestones are met. These studies are part of City Light's "Utility Next" portfolio, a collection of 17 prospective projects to enable Seattle’s vision of a clean energy delivery system. These projects will transform City Light's grid, meet future demand, and fulfill the utility's duties in the long-term economic recovery and clean energy development of the region.

I am not a fan of hydrogen. It is just an energy carrier not an energy source. Lithium batteries are a much better and more efficient way to store renewable energy. Hydrogen is very volitile and can leak and explode very easy. The energy state changes make it very low efficiency.

Why is it that we hear so much more about electric vehicles than we do about hydrogen ones? In the consumer segment, for example, Toyota makes the only example I know of, and it's not popular.

The push for H2 usage comes from the fact that a 100% non-fossil electric grid will have between 10% and perhaps 50% (depending on the nuclear & renewable fractions) of the annual production curtailed (i.e. discarded), unless that portion can be diverted into "dispatchable loads" like hydrogen production.

Hydrogen corresponding to about 3-6% could be used by the fertilizer industry.  So the question is: where do you find "difficult to electrify" applications to economically use the rest?

Converting the H2 to ammonia before sales will make it a more user-friendly fuel than H2 in many ways.  Its energy density, triple that of 5000 psi H2, lowers the barriers to entry, because it is cheaper to deliver by truck, so there is no need to wait for expensive pipelines to be built.  The tanks can be smaller and cheaper.  For long-haul trucks and ships, the greater density means greater travel range, but even for port applications that can use daily refueling, greater density means greater convenience.