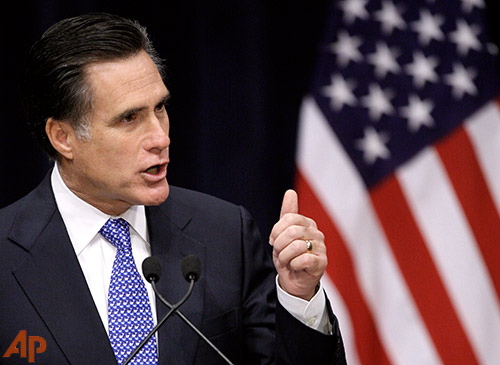 Today, the Romney campaign released his 59-point economic plan in a 160-page book (PDF here). While most of the energy policy section is spent debunking the “green jobs myth” and calling for expanded domestic fossil fuel production, it endorses a significant role for federal investment in alternative energy research and development (R&D) and supports the Advanced Research Projects Agency for Energy (ARPA-E).

The report also quotes his book as saying, “Spending our energy dollars here for domestically produced energy while also funding research, development, and production of new sources of energy creates jobs, strengthens the dollar, and reduces our exposure to supply risks and volatility.”

More specifically, points #38 and #39 of Romney’s economic plan are “Concentrate alternative energy funding on basic research” and “Utilize long-term, apolitical funding mechanisms like ARPA-E for basic research,” respectively.  Of course, ARPA-E doesn’t simply engage in “basic research” only, but the plan’s general thrust toward increased focus on energy R&D and innovation is clear.  These points are summarized on pages 95 and 96 of the report:

RESEARCH AND DEVELOPMENT
Government has a role to play in innovation in the energy industry. History shows that the United States has moved forward in astonishing ways thanks to national investment in basic research and advanced technology. However, we should not be in the business of steering investment toward particular politically favored approaches. That is a recipe for both time and money wasted on projects that do not bring us dividends. The failure of windmills and solar plants to become economically viable or make a significant contribution to our energy supply is a prime example.

Focus on Basic Research
There is a place for government investment when time horizons are too long, risks too high, and rewards too uncertain to attract private capital. However, much of our existing energy R&D budget has been devoted to loan guarantees, cash grants, and tax incentives for projects that might have gone forward anyway. As president, Mitt Romney will redirect clean energy spending towards basic research. Government funding should be focused on research and development of new energy technologies and on initial demonstration projects that establish the feasibility of discoveries. This approach offers the best opportunity to promote innovation without distorting the market.

Design Long-Term Funding Sources Free from Politics
From the perspective of creating new jobs and strengthening our economy, the main line of policy should be directed toward technologies that will replace imported oil with domestically produced fuels or electric power. Mitt Romney believes the Defense Advanced Research Projects Agency (DARPA) model—ensuring longterm, non-political sources of funding for a wide variety of competing, early stage technologies—holds the most potential for achieving significant advances in the energy sector. Investment should be channeled through programs, such as “ARPA-E,” that seek to replicate DARPA’s success in energy-related fields.