Role of Global Warming in Present and Future Hurricanes

Summary: The day that Hurricane Harvey made landfall in Texas the water temperature in the Gulf of Mexico was about 3-7°F higher than the average for 1961-1990.  This is important, because warmer water releases more moisture into the air than cooler water, feeding heavier rainfall.  This contributed to the extreme, unprecedented flooding in the Houston area caused by Harvey.  More moisture also leads to stronger winds in storms.

Climate models project that if humanity continues to burn fossil fuels without restraint the added carbon dioxide produced will lead to sharply higher global average temperatures.  These will produce more frequent and intense extreme weather and climate events, which bring serious socioeconomic harms to society.  One model study of storm activity along the Texas coast finds that the probability of an event will triple, from 6% per year to 18% per year, by the end of this century if emissions continue unabated.

Climate scientists have been warning of major climate consequences from man-made greenhouse gas emissions for almost three decades.  Those predictions have not changed, indeed have only improved, as scientific capabilities grew.  If humanity had responded earlier, the costs of action would have been lower or spread over longer times.  In the absence of past action at the scale needed, now is the time to act.

Introduction.  Climate scientists understand that the long-term global average temperature will continue to increase largely in response to the increased concentration of carbon dioxide (CO2) and other greenhouse gases (GHGs) in the atmosphere.  CO2 is increasing since it is the combustion product of humanity’s burning of fossil fuels (i.e., fuels based on carbon: coal, petroleum products and natural gas).  Other GHGs likewise arise from human activity.  CO2 is especially significant since, once emitted into the air, it resides there for centuries; it continues accumulating without balancing effects that remove it from the atmosphere (after about one-third of it dissolves into the ocean).

The greenhouse effect originating from these excess GHGs raises the global average temperature.  The temperature will remain elevated in coming centuries as the excess GHGs continue residing in the atmosphere.

One effect of higher temperatures at the surface of lakes and oceans is that more water evaporates as the water temperature rises, by about 4% per degree F (about 7% per degree C).  In addition, evaporation of water vapor requires the input of heat; as a result the surrounding air momentarily cools off.  Conversely, as water vapor condenses, such as in cloud and raindrop formation, heat is released, warming the surrounding air momentarily.  These temperature changes lead to local winds.

Storms such as hurricanes sweep over ocean water and entrap large amounts of water vapor.  When the vapor condenses the liquid falls to the ground as rain.  As this activity intensifies strong winds result.  Climate scientists foresee that as the earth warms, storms such as hurricanes will potentially carry more water vapor and generate stronger winds than in earlier decades.

Continued GHG emissions will lead to a higher incidence of extreme hurricanes.

The United Nations-sponsored Intergovernmental Panel on Climate Change (IPCC) pubished its Fifth Assessment Report, Part 1, in 2013.  It includes climate model projections of the relationship between the excess CO2 accumulated in the atmosphere from human activity and the predicted increase in the global average temperature resulting from the added CO2.

The models were run by assuming four CO2emission scenarios up to the year 2100: the most stringent ends GHG emissions beyond 2050, while the least stringent continues current use and unabated future growth in use of fossil fuels.  The results are shown in the graphic below, showing the dependence of the global average temperature on the atmospheric CO2 level, including the historical record of global average temperature from 1880 to 2010 in the lower left of the image. 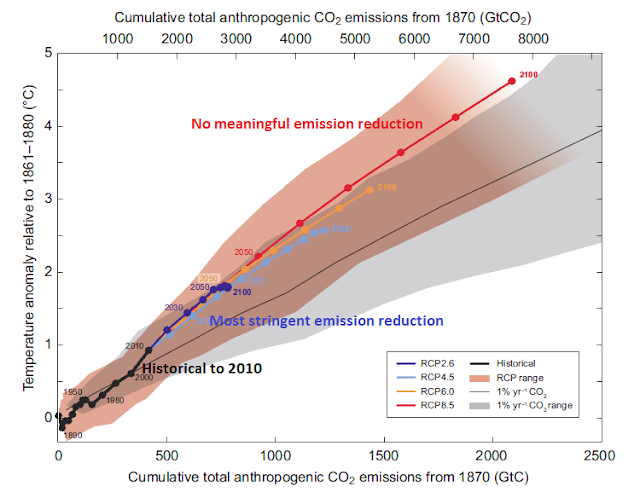 Historical record of global annual temperature increase above the average for 1861-1880 (vertical axis) as a function of historical atmospheric accumulated weight of excess carbon dioxide, due to human use of fossil fuels, above the level in 1870 (black; lower left).  The circles mark decades from 1870 to 2100.  Future model projections of the same temperature-carbon dioxide dependencies are shown from 2010 to 2100, based on four scenarios describing the stringency of policy used to limit future emissions (dark blue, most stringent; light blue, next less stringent; orange, weak limits on emissions; red, continued emissions from unabated use of fossil fuels). Source: Intergovernmental Panel on Climate Change, Fifth Assessment Report, Working Group 1, Summary for Policymakers. http://www.climatechange2013.org/images/report/WG1AR5_SPM_FINAL.pdf.

The historical data show that in 2010 the global average temperature was about 0.9°C (1.6°F) higher than in 1870.  The modeling shows that the most stringent scenario (dark blue) projects a temperature increase above the 1870 level of about 1.8°C (3.2°F) by 2050-2100.  On the other hand, the scenario based on unconstrained continued use of carbon-containing fuels (red) foresees that the global average temperature in 2100 will be about 4.7°C (8.5°F) above the 1870 temperature.  Such a drastic increase in global temperature will lead to periods of time, and/or regions of the earth’s surface, experiencing one or more of fierce heat waves; extreme storms that may be more frequent, or have more intense rainfall and winds; droughts; wildfires; and pronounced increases in sea levels.

Hurricane Harvey pummeled Houston and neighboring regions with torrential rainfall in August 2017.  While the hurricane would likely have happened anyway, rainfall was more intense because the water of the Gulf of Mexico was warmer than in the past.  This is seen in heat map for the Gulf, shown below for the day that Harvey made landfall. 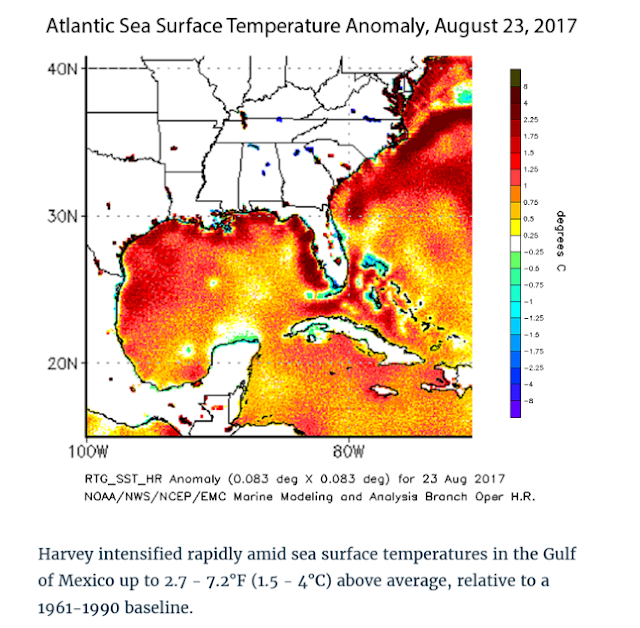 (The legend under the heat map is the one appearing on the web site from which the map was copied.)  The map makes clear that the excess heat in the Gulf of Mexico abutting the Texas coast, shown by the color code bar at the right, was a factor in the extreme rainfall and flooding generated by the storm. As explained in the Introduction, warmer water leads to more moisture evaporating into the storm.   A second factor was that the hurricane lingered over the Houston area for several days.  The total rainfall from the storm at Cedar Bayou was 51.88 in (1318 mm), perhaps the highest in the region.

The likelihood of a return event of a hurricane like Harvey increases 3-fold in the unrestrained emission scenariodescribed above for the first graphic.  K. Emanuel published an analysis analysis of hurricane rainfall properties by modeling previous storms impacting Texas.  This was carried out historically for the period 1980-2016, and with the unrestrained scenario for 2081-2100.  He developed results assuming a storm with 500 mm (19.7 in) of rainfall, much less than the local maximum cited above for Cedar Bayou.  The likelihood of such precipitation is evaluated at 6% per year for 2017, and increases three-fold to 18% per year by the final decades of this century if fossil fuel use remains unconstrained. Emanuel also found that for the period 1981-2000 the historical likelihood is modeled as 1% per year.  Thus, his modeling shows that global warming has already increased hurricane/storm likelihoods in recent decades by a factor of six, and for the century-long interval from the end of the 20th century to the end of 21stcentury by 18-fold.

Climate scientists have been warning for almost three decades of the hazards arising from increased levels of greenhouse gases in the atmosphere.  The increase in atmospheric CO2 from 1958 to the present is shown below. 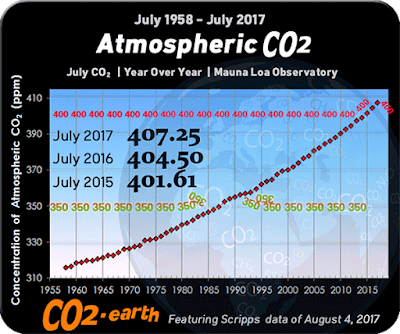 Atmospheric concentration of CO2 in parts of CO2 per million parts of air; ppm). Source: www.CO2.earth.

From the first IPCC Assessment Report in 1990 to the fifth in 2013-2014, the forecasts of future climate trends and harmful events have not changed.  It was already understood in1990 that manmade global warming imperiled our society’s wellbeing.  What has changed is first, an increase in the CO2 level from about 355 ppm in 1990 to 402 ppm in August 2016 (see the graphic just above); and second, increased certainty in the predictions of the effects of higher levels of greenhouse gases on the earth’s climate, arising from dramatic increases in data available, sophistication of climate models employed, and the computational power of modern supercomputers.

The flooding from the hurricanes that struck the Caribbean and southeastern U. S. in the summer of 2017 is just one example of the types of extreme events that climate scientists have foreseen over the past decades.  Others include heat waves, droughts, forest wildfires and sea level rise.  In the earlier decades they were only predictions, dismissed by many.  But by today the warnings have come to pass; extreme events will increase in occurrence and severity as warming worsens.

The harms and damages inflicted by extreme events have major economic and societal consequences.  The need arises to reconstruct damaged homes and facilities and to undertake projects that increase resiliency in the face of future climate threats.  These costs ultimately fall on the population at large, for example from increased insurance premiums and higher taxes.  Had earlier action been undertaken it is likely that such societal costs would have been lower, or at least spread out over longer time frames.

As of today, however, much of the response is on an emergency basis, i.e. as the response to unforeseen disasters.  The U.S. in particular, as well as the world at large, should accept the reality of the climate change threat.  We must make the investments now that are needed to minimize further greenhouse gas emissions and to adapt to the threats already with us.