Rising Prices Got You Down? Advanced Energy is the Answer 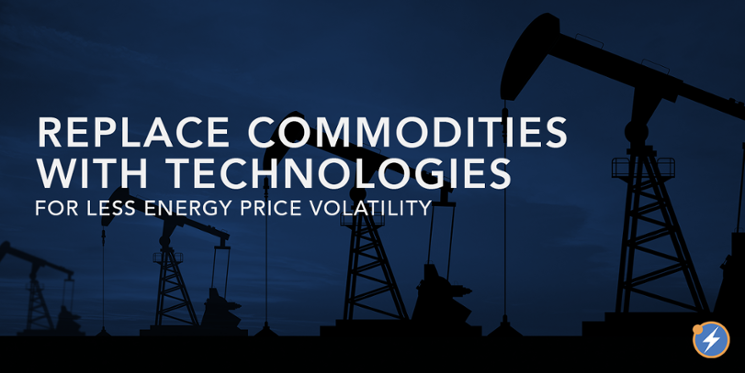 After nearly two years of pandemic paralysis, the new worry about the U.S. economy is inflation. After a long period of stability, prices are up, taking a bite out of household spending power. And as usual when prices rise, some of the most visible evidence can be found at the gas pump and in heating bills. But the spike in these energy prices shouldn’t be thought of as inflation at all. Rather, it’s a function of volatility, which is an inherent feature of fossil fuels. The answer to this price volatility is not found in the Strategic Petroleum Reserve, gasoline-tax holidays, or interest-rate increases. The solution is advanced energy.

The main factors behind the general price inflation are the sharp swings in consumer spending during the pandemic – from services to goods – which overloaded production and distribution channels, and the massive government payments that kept businesses and households afloat during COVID lockdowns. These are huge, but short-term, factors with widescale impact across the economy, some of which may resolve on their own over time, others may require action by the Federal Reserve.

What’s going on in the oil and natural gas markets, by contrast, is different, though no less painful. These energy resources are commodities, traded globally, and as such subject to all sorts of influences and constraints – often geopolitical in nature – that send their prices soaring or plummeting.

Just take a look at natural gas prices over the past 25 years: 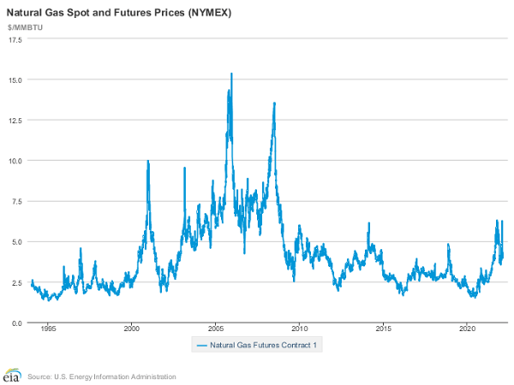 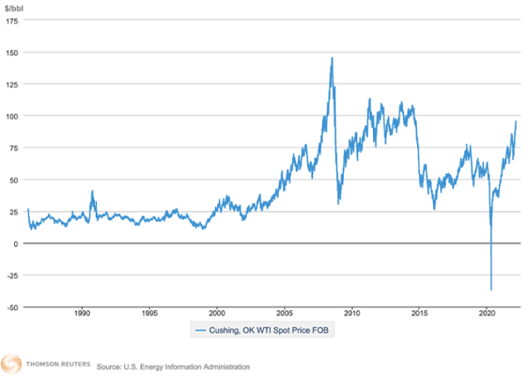 In general, prices for natural gas – for electricity generation as well as space heating – have been low in recent years, especially since the advent of fracking increased domestic supplies, and oil prices have been relatively low, for the most part, since 2015, as increased U.S. production added to a worldwide glut in the market. Before that, however, the price of both resources hit historic peaks in the 2005-2010 time period, resulting in over $4 per gallon gasoline prices, crippling winter heating bills, and surging electricity rates.

Now, as the U.S. (and global) economy comes out of the COVID doldrums, increasing demand, and international tension (currently focused on Ukraine and the flows of Russian gas and oil into Europe that could be disrupted, which had Brent Crude hitting $99 a barrel Tuesday morning, $96 at West Texas Intermediate) creates uncertainty of global supply, prices of these energy commodities are shooting up.

The point is, these energy commodities are just that – commodities. Commodity prices are volatile. And the answer to energy price volatility is to get off of commodities – and on advanced energy.

As AEE CEO Nat Kreamer explained in a 2020 webinar, the overall trend characterizing advanced energy is “technologies replacing commodities.” And while commodities are volatile by nature, influenced by short-term supply and demand swings, the cost curve of technologies is, by nature, to get cheaper and better over time.

We’ve seen it in renewable energy power generation, the cost of which has plummeted over the past decade, with wind and solar displacing first coal and now natural gas as the lowest-cost power source in many U.S. markets (see graph below), and once installed, the cost of the electricity from wind and solar is largely known, and is often sold under long-term fixed price contracts.

It’s on the verge of happening in transportation, where declining battery costs, inherent performance and fuel cost advantages, and proliferating model choices offered by automakers are setting the stage for an electric vehicle revolution.

Advanced energy also offers immediate ways to save money, and gain relief from inflation. Think energy efficiency as the most effective way to lower electric and heating bills today.

As for tomorrow: Solar, wind, battery storage, demand-side resources instead of power plants fired by coal and natural gas. Electric vehicles fueled by clean energy instead of gas- and diesel-guzzling cars, trucks, and buses. Heat pumps and induction stoves instead of furnaces and gas ranges. That’s the protection we all need against the next spike in commodity prices, and the one after that.

Let’s get there as quickly as we can, starting with the clean energy provisions of the Infrastructure Investment and Jobs Act and still-pending Build Back Better legislation.

What's next in your uber-entitled, make-believe world of advanced energy, CEO Nat Kreamer? Technology replacing food, or healthcare? Time to take off the virtual reality headset and stop misleading those who might be tempted to believe you.