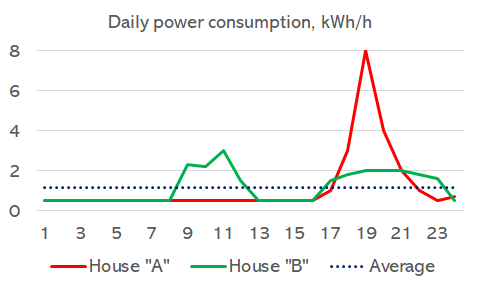 The main difference between them is in the way of heating the water for the bath. One uses instantaneous electric showers and the other has a central heater.

The graph shows a typical day for these two houses, which have exactly the same average daily consumption in kWh/h (dashed line).

What stands out, of course, is the "peak", i.e. the maximum daily consumption in kWh/h.

A tariff system should signal different energy bills for these two houses. For the simple fact that meeting the demand for house "A" requires much more investment in the value chain (Generation, Transmission and Distribution) than house "B".

But the two houses pay the same monthly bill, which is solely calculated by consumption in kWh, which for both houses is the same.

Do you agree that it is high time to improve tariffs and encourage consumption towards minimum costs?

For commercial and industrial loads, it is common to have the contracted capacity plus the consumed energy in the tariffs. Because they are few numbers not in millions.

But, for residential right now, it is just energy consumption that has to be paid for. With tankless showers with high instantaneous demand, a new tariff must be applied.

This may affect negatively regular consumers of central heating.

Hi Amal, I guess that this (ongoing) residential rate structure was created at a time when the challenges were so different. Nowadays it makes no sense to allow customers use power regardless of their load factor. I see a great opportunity for improvement!

Rafael, in the U.S. this has been on ongoing debate for fifty years.

Between 1935-1974 it had been a utility's responsibility to provide sufficient electricity in its service area - the "regulatory compact" laid out by the Securities and Exchange Commission demanded it in exchange for the privilege enjoyed by utilities as monopoly power providers in their service areas.

Regulated TOU (time-of-use) pricing came into being as a result of the 1974 OPEC oil embargo. It was instituted not as a means to avoid consumption peaks, but to reduce overall consumption - there was a genuine, and justifiable, fear the U.S. would be at the mercy of mideastern caliphates to keep up with expanding public demand.

Does the regulatory compact demand utilities should be singularly responsible for meeting public demand? Is the public obliged to lower demand at peak times, ostensibly to keep prices low for everyone? Everyone involved in public energy policy has an opinion on this issue. Currently, resolving it has resulted in what might be considered an uneasy compromise, with some states leaning more heavily on the public. To avoid the perception utilities aren't holding up their end of the bargain, it's become trendy to consider lowering consumption during peak hours a "demand-side resource" - as if not using electricity is somehow equivalent to producing more of it.

My opinion (since you asked) is that shifting this burden to the public is unjustified. Calling incentivized conservation a demand-side resource is a bit like blaming world hunger on people who eat too much - that those with barely enough to eat should starve, so that food prices will be lower for the rest of us. The burden is heaviest for those at the lowest rung of the economic ladder.

Curiously, it's the renewable energy crowd who is calling out for more demand-side resources - that the public should only use electricity when the sun is shining, or the wind is blowing. But you really don't want to get me started on whether solar panels and wind turbines are little more than playthings of the rich (trust me, you don't).