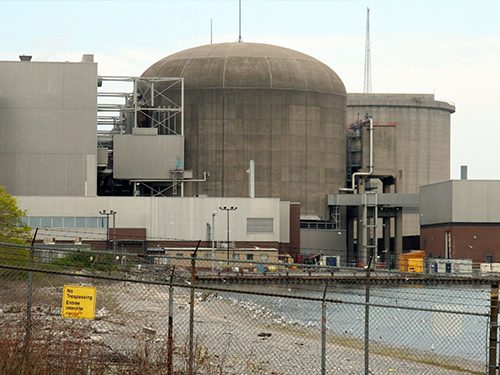 As global temperatures hit record highs, Ontario is moving toward a “more than 300% increase in climate pollution from gas-fired power plants,” warns OCAA campaign director Angela Bischoff, in a recent op-ed in the Toronto Star. That, according to data from Ontario’s Independent Electricity System Operator (IESO), is what would result from increasing the output of the province’s gas-fired generating stations to fill in the power generation gap, if and when the Pickering Nuclear Station closes.

No better is the idea of investing in the nuclear plant to extend its life—a proposal Bischoff called “reckless and financially irresponsible” in an August statement. That post was in response to a declaration from Ontario Power Generation that the plant is safe to operate through 2025 (a year beyond its scheduled closure date), and assertions from the Ford government that the move would preserve some 4,500 jobs for an additional year.

“Pickering is the fourth-oldest (and fifth-largest) nuclear plant in North America,” writes Bischoff. “It is surrounded by more people—2.2 million within 30 kilometres—than any other nuclear station on the continent.” A recent false alert and the lack of an evacuation plan stood as proof that the province is ill-prepared for any kind of serious accident.

And if jobs are the question, Bischoff has the answer: “By immediately starting to dismantle the Pickering Nuclear Station, when its repeatedly extended operating license expires in 2024, we can create 32,000 person-years of employment between 2024 and 2034 and return most of the 600-acre Pickering waterfront site to the local community by 2035.” The work of taking down the facility would also be an opportunity for the 1,900 people currently working at the plant to retrain in the fast-growing nuclear decommissioning industry.

As for the safe, low-cost, and climate-friendly path away from both nuclear and gas, the route ahead is clear and well-established, says Bischoff. “The Ford government has plenty of better options for keeping the lights on, from restoring energy efficiency programs and importing low-cost water power from Quebec to ending its irrational attacks on renewable energy.”

Given that commercial energy efficiency programs reduced costs for businesses while allowing the province to pay “as little as two cents per kilowatt-hour,” Bischoff questions why a conservative-minded government like Ford’s should persist in its hostility to such programs, “especially with businesses and citizens grappling with the economic hit from COVID-19.”

Equally inexplicable—“like turning away free ice cream on a hot summer day,” she observes—has been Ontario’s repeated rebuffing of Quebec’s offer of a long-term deal on hydropower “at a price that is half what we are currently paying for nuclear power.” That reaction “just adds to the suffering of Ontario’s already stressed electricity ratepayers, who are still waiting for the province’s long-promised 12% reduction,” Bischoff writes.