Renewable energies and e-mobility in times of the corona pandemic

RE expansion increases compared to the previous year

In detail the expansion of PV was even able to increase compared to the first half of the previous year, reaching 2362 MW at the end of June 2020. The main drivers for expansion are small rooftop PV systems. In fact they can be built outside of the tender system.

It clearly shows the slump in wind expansion since 2018 and the start of a stronger expansion of solar energy at the same time. We have analysed the reasons for this in more detail in another article. 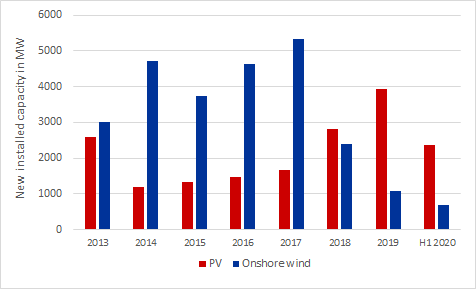 The growth in offshore wind turbines has hardly changed compared to the first half of 2019, while only 31 MW of biomass plants were commissioned in the first six months of 2020. Figure 2 shows the monthly growth of PV, onshore and offshore wind. Despite the corona pandemic, the expansion of PV has increased (keyword: abolition of 52 GW cap).

There is a slight dent in new wind power installations between March and May 2020, whereas they increased again in June 2020. This dent could be a corona effect, but is also of a reporting nature, as some plants from 2019 were not reported as newly commissioned until January and February 2020. 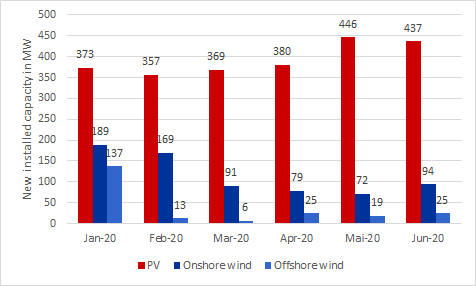 Figure 2: monthly new PV, onshore wind and offshore wind in the first half of 2020 in MW (Source: Energy Brainpool)

To sum up: The expansion of renewable energies was hardly affected by the corona pandemic, but is rather subject to longer-term political framework conditions.

Even though the corona pandemic has severely dampened demand for consumer goods and also for vehicles, electric mobility appears to be benefiting so far. The Corona economic stimulus package we have been investigating is probably also playing its part in this. For example, the purchase premium for electric vehicles with a net list price of EUR 40,000 or less was increased from EUR 3,000 to EUR 6,000. The growth of electric vehicles has increased steadily over the past ten years.

At the end of 2019, for example, more than 136,600 purely battery-powered electric vehicles (BEV) were on German roads. This corresponds to a share of 0.3 percent of the private passenger vehicle stock. In contrast, the number of hybrids was just under 540,000 (102,000 of which were plug-in hybrids), accounting for 1.1 percent of the stock. Figure 3 shows the strong growth of pure BEV in Germany from 2010 to July 2020. 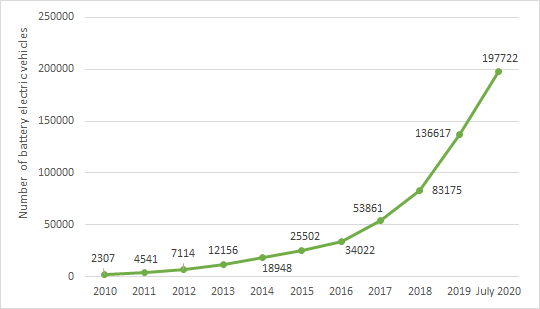 Interesting data can be obtained from the monthly vehicle registration reports of the Federal Motor Transport Authority (source: KBA). For example, the monthly new registrations of electric vehicles in 2020 show a strong increase compared to 2019. The monthly average in 2019 for the BEVs, by comparison, was just under 5300 vehicles.

This means that between January 2020 and July 2020 almost 3,500 more BEVs were registered each month than the monthly average in 2019. However, Figure 4 also shows that corona caused a dent, especially in April and May 2020. 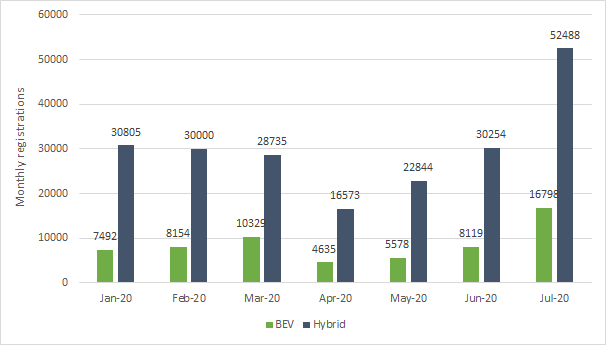 July 2020 in particular stands out. Last month, the innovation premium for the purchase of an electric car or plug-in hybrid was applied for more often than at any time since its introduction in 2016, with around 20,000 applications received by the Federal Office of Economics and Export Control (BAFA) (source: Electrive).

It is also interesting to note that new BEV registrations from January to July 2020 (61,105) have already almost reached the total number of registrations for 2019 (63,281). The top models for new registrations of pure battery vehicles since the beginning of 2020 are the Volkswagen e-Golf and the Renault Zoe, each with almost 10,000 (source: Electrive).

Since vehicle manufacturers will also have to reckon with penalties for fleet limits of over 95 g CO2/km from 2021 onwards, the corporations are bringing more electric vehicles onto the market (source: ADAC).

E-mobility has gained momentum due to the higher purchase premium, at least in the first half of 2020, even though the corona pandemic led to a two-month dent. The high number of applications for the innovation premium at the BAFA to date shows that 2020 will probably be a key and record year for e-mobility in Germany.

With regard to e-mobility, do you think there's a way to make lemonade out of the economic crunching lemons? Like is now a good time for governments to be investing in EV charging infrastructure as a way to create jobs and spur economic development?