When Minnesota first adopted a 25% renewable energy standard and passed the Next Generation Energy Act to reduce statewide emissions in 2007, it moved to the head of the pack for United States climate policy. But plummeting solar and wind prices and increasingly frequent extreme weather events have accelerated climate action, and many states have now surpassed Minnesota’s ambition, with 11 setting 100% clean electricity targets.

Researchers modeled a policy pathway aligning with global efforts to limit warming to 1.5° Celsius – what scientists say we must do to avoid dangerous impacts. This strategic set of policies could cut state emissions more than three-quarters by 2050, while adding $11 billion per year to Minnesota’s economy by 2050 and creating 16,000 additional annual job-years in 2025 and 39,000 job-years in 2050. (A job-year is one year of work for one person; it is a more precise measure because an individual job may last for six months or six years).

A decarbonized grid is a clean economy’s bedrock, but Minnesota’s Department of Commerce (DOC) and Pollution Control Agency (MPCA) found emissions in other sectors like buildings and industry are actually rising, meaning policies to electrify these sectors can compound clean power’s ability to cut emissions across an economy.

The EI and RMI policy pathway would enable Minnesota to build on its current success and achieve broader economic decarbonization. An accelerated clean energy standard, more zero-emission vehicles, and electrifying buildings and industry, along with more sustainable agricultural practices, could achieve deep emission reductions while unlocking a sustainable and more equitable economy.

Minnesota not on track to achieve climate goals

The Next Generation Energy Act of 2007 requires Minnesota to reduce economy-wide emissions 80% below 2005 levels by 2050, with benchmark reduction goals of 15% by 2015 and 30% by 2025. The latest DOC and MPCA report finds overall statewide emissions have decreased just 8% while residential building emissions grew a whopping 32% and industrial emissions rose 18%, even as transportation emissions—the state’s largest source of emissions— remained relatively static.

Due to its renewable portfolio standard, falling wind and solar prices, and renewable investments by major utilities, the state’s report does show electricity sector emissions have fallen 29%, but this progress is being canceled out by growing emissions in the other areas. In fact, the EI and RMI modeling projects Minnesota’s emissions will remain relatively consistent through 2050 unless the state adopts more ambitious policies – a wake-up call for policymakers. 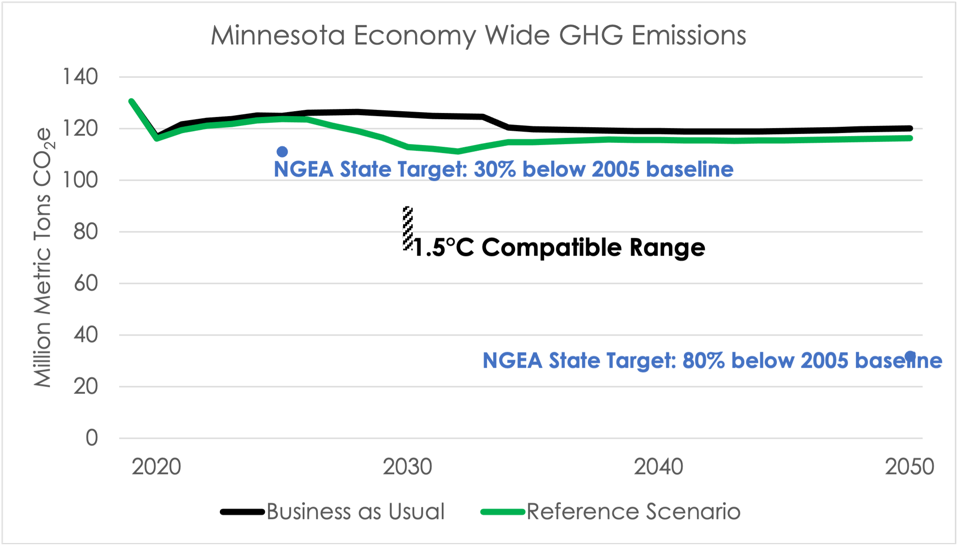 Scientific consensus says we must limit global warming to 1.5° Celsius to avoid a dangerous climate future, which requires cutting emissions roughly in half by the end of 2030, with emissions dropping to net zero by 2050. To achieve this outcome, every state must do its part to align policies with the goal. EI and RMI’s “1.5°C Scenario” outlines one policy pathway capable of cutting statewide emissions in half by 2030 and more than 75% by 2050.

Minnesota has been at the vanguard of America’s renewable revolution thanks to early supportive policies along with open prairies and steady winds that make it ideal for wind energy. The wind industry invested $8 billion dollars statewide, with companies like Blattner Energy and Mortenson headquartered in the state. Minnesota now has more than 4,000 megawatts (MW) of installed wind providing nearly 20% of the state’s electricity.

Even with its frigid winters, solar has shone in Minnesota, driven by policies including one of America’s leading community solar policies. Along with 1,500 MWs of installed solar, Minnesota is also now home to a 15 MW battery storage project – the largest in the Midwest.

These clean energy investments have reduced statewide emissions and created more than 60,000 jobs. The EI and RMI modeling shows Minnesota can build upon its existing progress to accelerate grid decarbonization while cleaning up other sectors and creating a strong economic future.

Smart policies for a clean energy economy in Minnesota

The 1.5°C pathway was modeled with the new Minnesota EPS, which estimates climate and energy policy impacts on emissions, the economy, and public health. The model uses publicly available data to estimate annual emissions, infrastructure, and economic impacts of policies through 2050, accounting for how policies like a clean electricity standard and electric vehicle sales target interact with one another. EPS models have been developed for more than a dozen countries and several subnational regions including California and Virginia.

A decarbonized grid enables policies that electrify vehicles, buildings, and factories to compound power sector emission reductions. But even though Minnesota has built a strong renewables economy, it has fallen behind other leading states.

Governor Walz’s proposed goal would help catch up, but the 1.5°C Scenario moves faster, transitioning to zero-carbon power resources five years earlier, by 2035. A stronger standard could add 10 gigawatts (GW) of new solar by 2030 and 40 GW by 2050 – a rapid pace, but not unrealistic given that solar capacity jumped 50% in 2018. This scenario also adds 9 GW of wind by 2030 and 22 GW by 2050, while increased transmission infrastructure, demand response, and flexible grid storage ensure reliability. 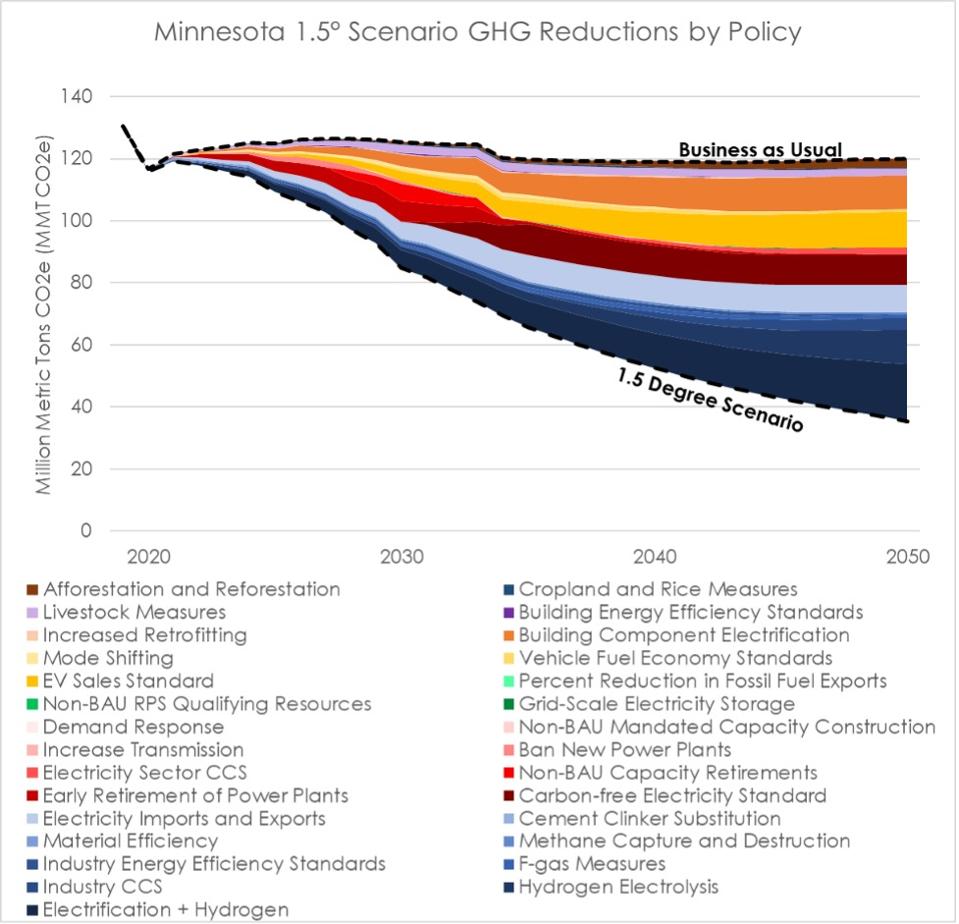 Transportation is the state’s largest source of emissions and a major source of dangerous air pollution, with Black Minnesotans exposed to 65% higher concentrations of dangerous particulate pollution. Getting highly polluting vehicles off the road and creating walkable communities is necessary to cut emissions, but also to address historic inequities. The 1.5°C Scenario shows that an all-electric-vehicle sales standard beginning in 2035 could have the greatest emissions reduction effect, slashing transportation emissions 63% by 2050. Every new gas vehicle sold locks in years of emissions, so rapidly transitioning to electric vehicles is critical to hit long-term climate goals. The state’s proposed Clean Cars Minnesota rule is an essential first policy to adopt, as it will increase options for electric vehicles.

In the buildings sector, efficiency investments and electrification of space and water heating can cut emissions while reducing utility bills. An RMI study found utility bills for a new all-electric home in Minneapolis are 9% lower than for a home that relies on gas for cooking and heating. Combined with additional appliance efficiency, a sales standard requiring that all new appliances be efficient and electric could reduce emissions from this sector 90% by 2040.

Reducing Minnesota’s industrial sector emissions is possible by switching to electricity and clean hydrogen to power boilers and create heat. The 1.5°C Scenario includes policies to switch to electrification and hydrogen fuels, implement industrial carbon capture and sequestration, increase industrial efficiency, and capture leaked methane. The policy package would also phase out refrigerants in line with the Kigali Amendment, which President Biden has asked the Senate to ratify.

New research by The Nature Conservancy complements EI and RMI’s research by identifying 13 agricultural and land-use policies like cover cropping, no-till agriculture, and reforestation that could cut Minnesota’s emissions an additional 20%.

Transitioning every economic sector to clean energy involves upfront costs and challenges, but modeling shows that long-term benefits far outweigh any initial costs. “Prior to the pandemic clean energy jobs were growing 2.5 times faster than all other sectors of our state’s economy,” Gregg Mast, Executive Director of Clean Energy Economy Minnesota, said in an email. “Swift action on clean energy policy will reignite job growth, accelerating the critical transition to a zero-carbon future.” 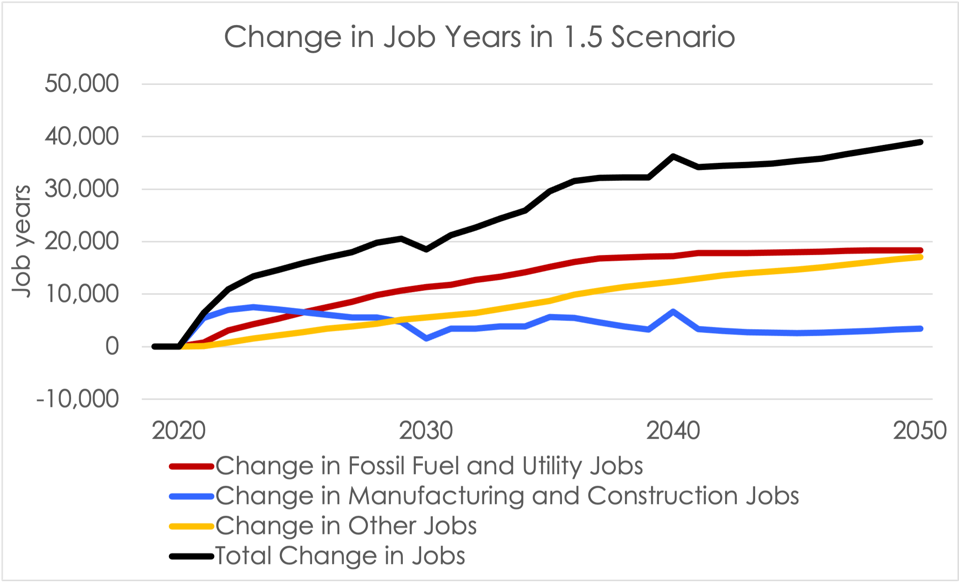 Climate and clean energy policy solutions present an unprecedented opportunity to revitalize both urban and rural communities, create jobs, and protect agricultural lands. Governor Walz’s recent efforts to enact a faster clean energy standard and bills introduced this session to adopt an all-electric building code, along with a proposed Clean Cars rule, are all foundational policies. But the EI and RMI research reveals that going further, faster, would bring even greater benefits – and help secure a safe climate future.