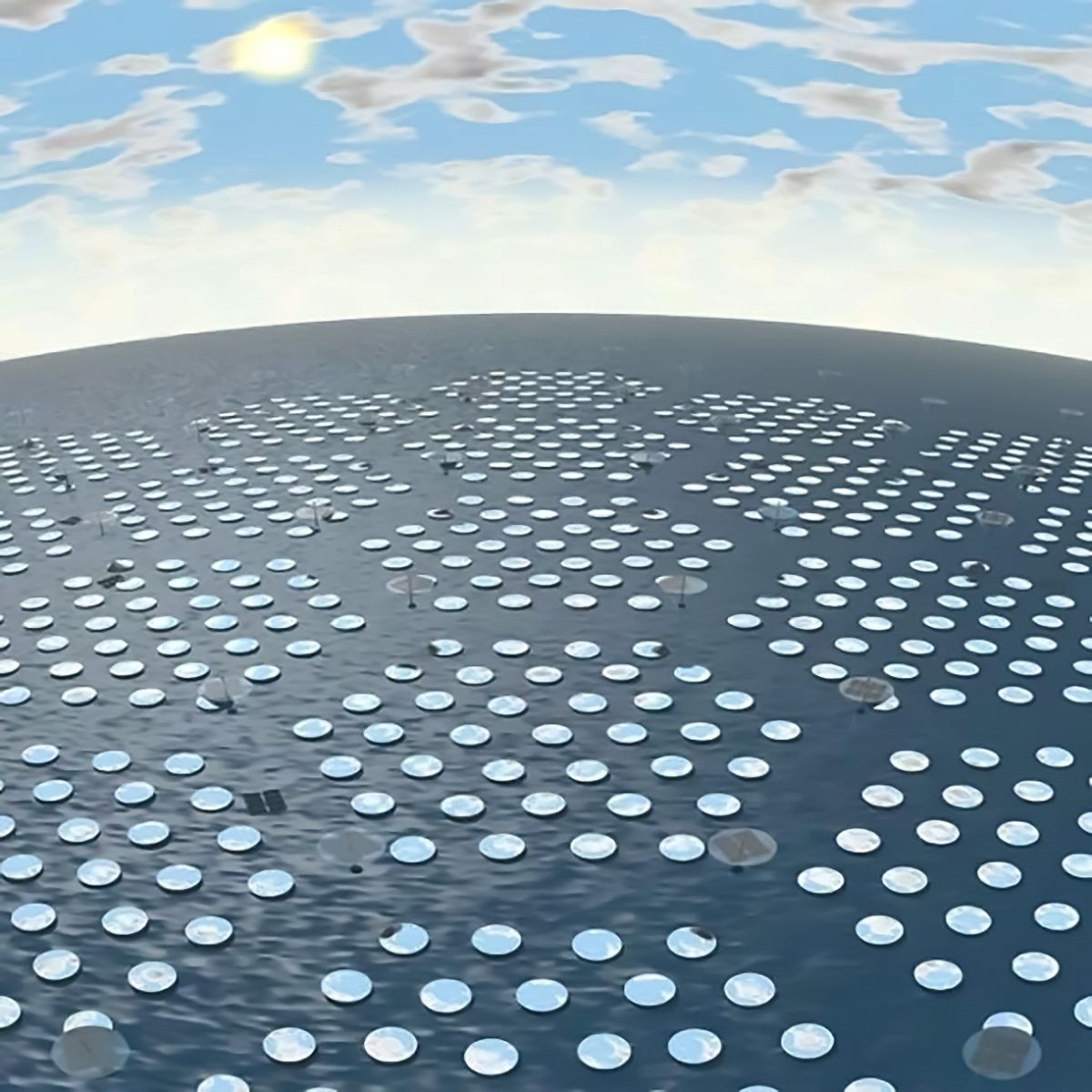 Dr. Ye Tao of The Rowland Institute at Harvard points out, "Temperature rise, is the biggest and gravest concern that we face. We are overstepping a heat threshold. Thermal stress decimates biodiversity, ruining aquatic, marine, and terrestrial ecosystems alike. Humans may not be around once we transgress that redline. If we survive, we can have conversations about low emissions and deacidification. Prioritize temperature—then worry about greenhouse gases in the atmosphere and carbonic acid in the oceans!"

His solution, Mirrors for Earth’s Energy Rebalancing (MEER), uses glass mirrors that reflect solar radiation away from Earth to cool the biosphere; redirect some of the  solar radiation to harness its potential for enhanced food production and carbon-neutral energy generation; facilitate and accelerate the biological and chemical processes that reduce atmospheric carbon dioxide and methane; and establish “an open education network for promoting panhuman solidarity and justice and supporting them through relentless innovation.”

To accomplish these goals, between 15-20 trillion square meters of land and/or ocean surfaces must be covered with thin-aluminum-film-coated glass mirrors that reflect solar radiation back into space to cool the biosphere and/or to redirect some of the radiation to bolster agriculture and renewable energy production or to heat marine bivalve shells to convert the convert the calcium carbonate to lime that can neutralize ocean acidity.

Stratospheric aerosol injection is a Band-Aid that would commit mankind to a slow death because it inhibits the transition to renewable energy, he says. And direct air capture would not be scalable.

In his presentation to the Glasgow UN Climate Conference he shows it takes 10 years’ worth of the Earth’s primary energy to sequester 1 year’s worth of emissions.

Legislation and lobbying create regulations and carbon taxes to make carbon dioxide removal companies profitable, but these won’t have any measurable climate impact,” he warns.

“Those are not solutions; they are distractions,” and to this  juncture this writer is in complete agreement with the MEER team’s assessment.

However, according to Dr. Ye, his mirrors are the only technology proposed right now that could avert climate catastrophe. At full scale, within 30, 40 years, it would fully cancel anthropogenic emissions, fully decarbonize the economy and to fully reverse the physical impact of greenhouse gases.

Thermodynamic Geoengineering (TG) is an other method and apparatus for load balancing trapped solar energy that uses small masses of low-boiling-point fluids to absorb heat in an evaporator situated in higher heat reservoir near the ocean surface using the latent heat of evaporation to convert a portion of the heat to another form of energy in a turbine or other heat engine, providing a variety of energy related service applications to end users from the converted energy, depositing a residual latent heat of evaporation in a deep ocean heat exchanger situated in the lower heat reservoir, using the cold seawater as a heat sink. A latent heat of condensation warms the cold seawater making it buoyant. The warmed water rises slowly by convection to the higher heat reservoir where the heat is recycled in a turbine or other heat engine. The condensed liquid is pumped rapidly back to the ocean surface to complete the fluid cycle.

Resplandy et al. 2019 estimated the annual amount of energy that enters the system between 1991 and 2016 due to warming was about 408 terawatts a year and this total will have doubled the last 14 years and is likely to double two more times by 2050.

In his Glasgow presentation Dr. Ye uses the range of between 431 and 1000 terawatts for the heat of warming.

This heat will have accumulated over the course of about 225 years and will have to be converted over a similar span.

Whereas mirrors can cool the surface by reflecting heat back into space, mirrors directed at concentrating solar power plants lose this ability.

TG plants like the chevron shaped, 1 gigawatt hydrogen production plant shown below convert 7.6% of the heat of global warming to work, send 92.4% into deep water, and are every bit of efficient at cooling the surface as mirrors while utilizing a tenth of the surface area and are a cheaper source of energy than concentrated solar power. 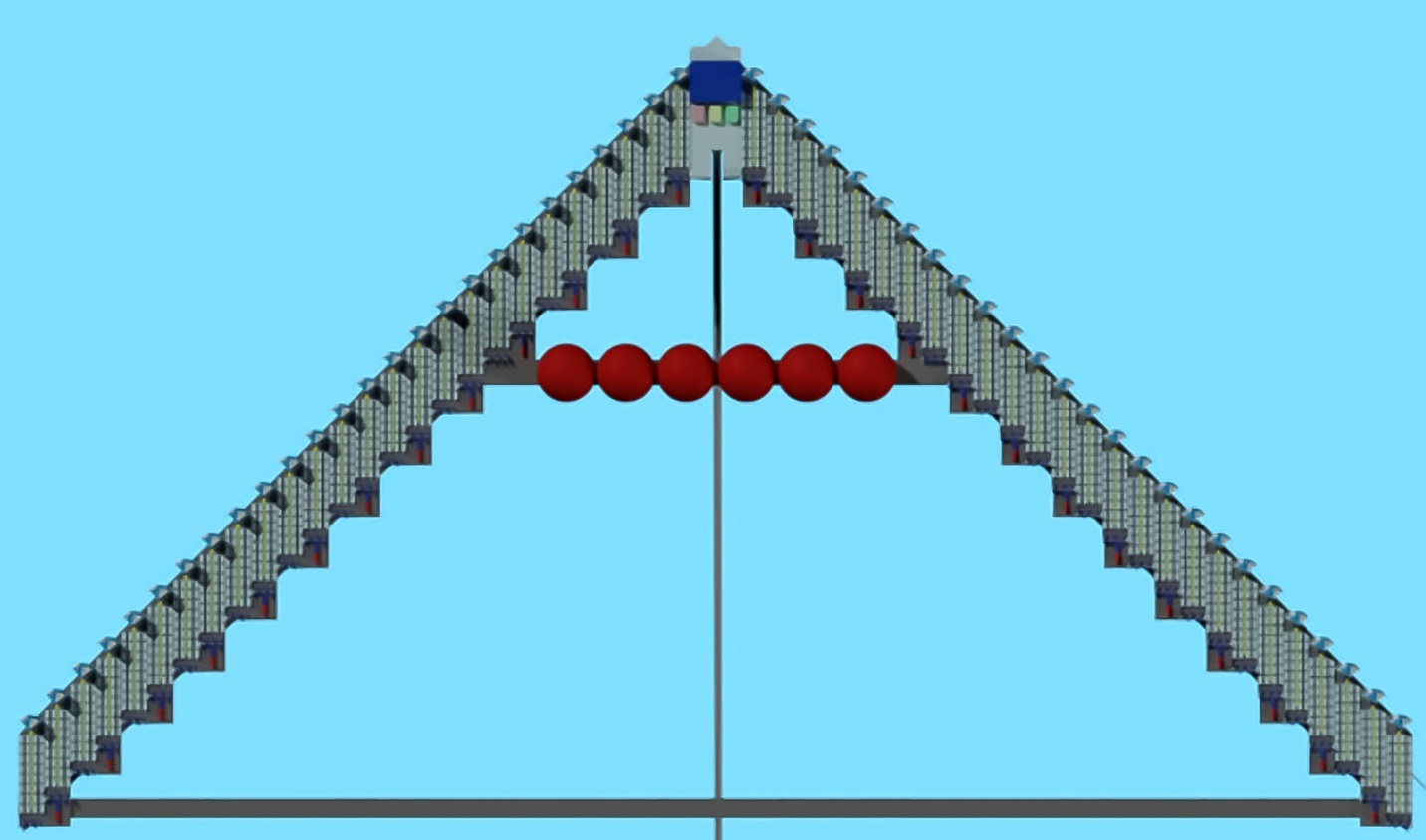 According to the US Department of Energy the levelized cost for utility-scale concentrated solar energy was $.25 per kWh in 2010, and its goal for 2030 is $0.03 per kWh with an additional $0.03 per kWh for storage. 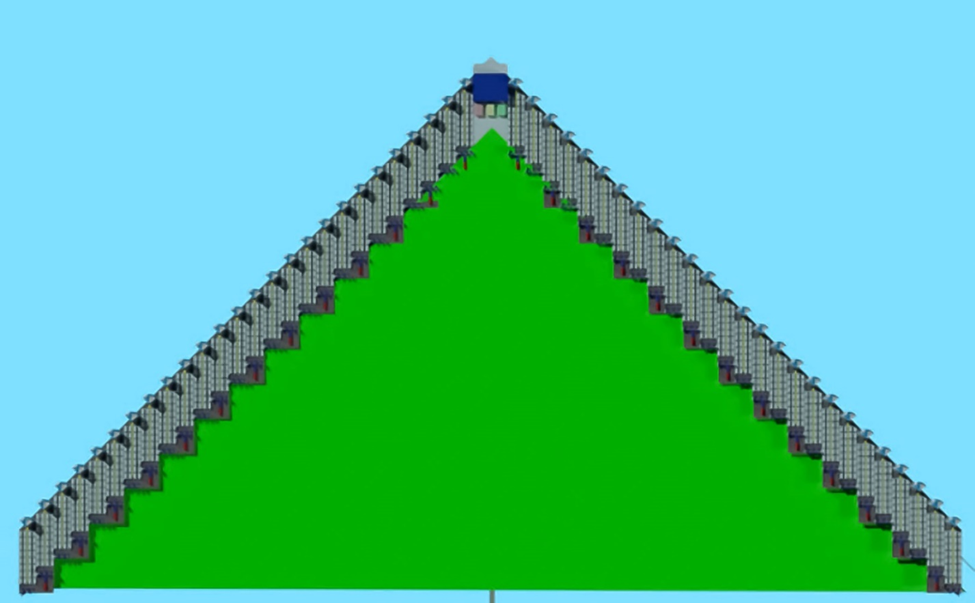 The green area could be covered with mirrors, but this would be overkill and defeats the purpose of the plants, which is to harvest and process the heat of the top 13 meters of the tropical surface to convert this heat to work and to shift the balance with heat pipes into deep water.

It also would be costly to cover this area with mirrors because the mirrors require infrastructure to keep them afloat and to keep them protected from the elements.

For the same reason MEER’s mirrors use up too much space.

In stead of being mirrors the TG greenfields can and should be converted to industrial parks that decarbonize every sector of the economy.

Earth’s ecosystems run on the power of sunlight but reflected energy can be used only once, whereas the energy sent into deep water with heat pipes returns to the surface and can be recycled to produce more work.

Dr. Ye says, “people need to know that this economy needs to change, we have to change our value systems, and capitalism needs to go.”

I submit this is a nonstarter.

The best way to rebalance the Earth’s energy is with unfettered capitalism that lets the market work with the best available technology.