The Real Motives Behind The Anti-Fracking Movement Here’s a hypothetical for your consideration: an anonymous country: 1) controls a great deal of oil and natural gas production, 2) seeks to increase market share to influence geopolitics, 3) identifies a threat to sole sourcing energy to its main customer, and 4) is willing to accept any means to the end.

There are a lot of altruistic people in this world who always do things honestly and above board because it is the right thing to do. These people see integrity as doing the right thing when no one else is watching.

On the contrary, there are also people who stop at nothing to acquire power, wealth, and control. Any usual suspects in mind?

Europe has seen a green movement for many years as they close coal and nuclear plants, while deactivating their oil and gas industry. Their proposal for this energy shortfall has been to invest heavily in solar and wind generating facilities to allow a green energy transition.

Since the fall of 2021, and the winter and spring of 2022, the ramifications of that strategy has finally been clear for all to see in the spiraling high costs of energy in the form of electricity, diesel, gasoline, and natural gas.

For Europe, natural gas provides almost half of home heating, and that heating represents 70% of a household's energy consumption.

The new proposals for the EU’s energy strategy for the winter of 2022-2023 include: 1) increasing coal-fired electricity generation now, 2) conserving natural gas this summer to store supplies for winter, 3) accepting a slower if not negative GDP growth rate due to natural gas cutbacks to industry, and 4) hoping any spare U.S. LNG supplies are able to be delivered.

Vladimir Putin’s interest in European and America fracking:
A simple search of actions a decade ago in the European energy market clearly shows Russia’s Vladimir Putin denounced the “fracking” shale revolution, recognizing it as a threat to his future near-monopoly on European oil and gas sales.

Russia expert and former National Security Council member Fiona Hill testified during former President Donald Trump's first impeachment proceeding. During those impeachment hearings, then-Rep. Mike Conaway, asked Hill whether Putin saw fracking in the United States and Europe as a threat to Russia's oil and gas industry. “In November 2011, I actually sat next to Vladimir Putin at a conference in which he made precisely that point,” Hill said. “He started in 2011 making it very clear that he saw American fracking as a great threat to Russian interests," she said. Putin hates fracking just like any crony capitalist hates competition. He's derided fracking as “terrible for the environment.” His state-owned television station RT has run anti-fracking documentaries.

Why was Russia so interested in American natural gas production? In her testimony, Hill explained that Putin “saw American fracking as a great threat to Russian interests” and that a fracking ban would “play into strengthening Putin’s hands.” That’s because natural gas supplies are central to European economic markets. Not only do more abundant gas supplies make the U.S. stronger, but they make America more capable of supplanting Russia as a key supplier of European gas.

In the years since, RT has unleashed a barrage of critical tweets about U.S. fracking, calling American shale gas “another Ponzi fraud” in 2013; describing shale gas as a “bubble about to bust” in 2015; declaring in 2015 that the shale boom would be over by year’s end; writing in 2018 that shale’s “glory days are numbered;” and announcing in August that “time is almost up for U.S. shale industry.”

If the United States had not gone from importing 60 percent of its oil to becoming the world’s No. 1 producer and, this year, the world’s largest exporter of LNG, Europe might now be his hostage. Now, Putin has revealed just how formidable a strategic asset U.S. oil and gas is, not only for the United States but also for Europe.

The Director of Global Warming Policy Foundation Benny Peiser says Russian President Vladimir Putin has “colluded” with green movements to tighten energy markets in Europe. Mr. Peiser said natural gas prices in Europe are ten times higher than in the US because Europe is not using its shale resources. “Putin has colluded with the green movement, not just in Europe, all of the world, also in the U.S., to support green activists trying to block domestic extraction of oil, gas, and coal,” he told Sky News Australia. “Europe is completely dependend on Russia on energy, which is why Europe finds it so difficult to deal with Putin.”

The Kremlin’s all-out effort to stop fracking in Western nations also includes covert operations, documented by former U.S. ambassador to Lithuania Keith C. Smith in a published paper by the Center for Strategic and International Studies. In this paper, titled “Unconventional gas and European Security: Politics and Foreign Policy of Fracking In Europe,” Smith details Kremlin/Gazprom behind-the-scenes operations that were instrumental in obtaining fracking bans in Germany and Bulgaria. Similar dirty work appears to have been involved in ramming through fracking bans in France, Italy, and other European countries.

Alexey Miller, a longtime Putin crony going back to the early 1990s, when they stole the money that was supposed to buy food for the starving city of Leningrad, who now oversees the Russian state-owned gas company Gazprom, strongly supports his friend on this issue. He would like to see an EU-wide ban on fracking, and the Gazprom board is with him 100 percent.

The fact that Kremlin opposition to European fracking has nothing to do with environmental concerns should be clear even to the dullest among us, because Russia has massive fracking projects of its own underway in Siberia. The real goal is to keep Europe dependent upon Russia for its fuel supply. Natural-gas prices in Europe are quadruple those prevailing in the United States, and by maintaining a near-monopoly on over-priced European natural-gas imports, the Putin regime assures itself of a vast source of revenue.

As Russia has waged their information warfare on Americans through social media, 21 Democrats in the U.S. House of Representatives sponsored a bill in 2020 that would ban "all fracking on onshore and offshore land by 2025." 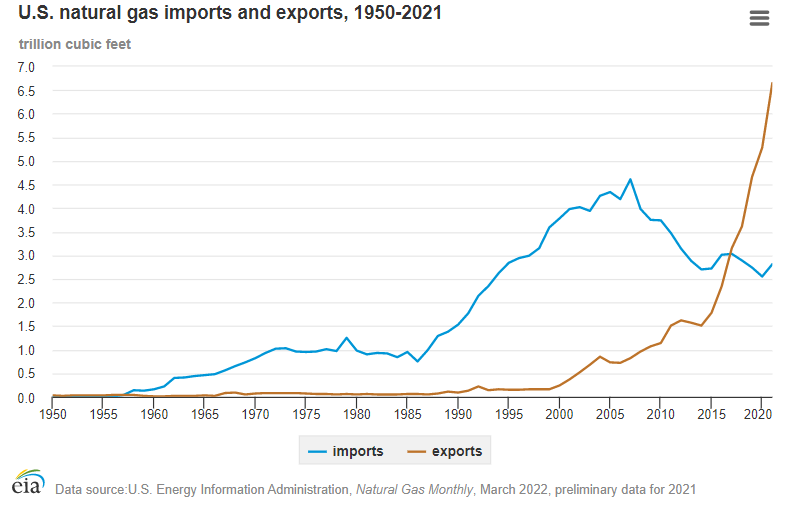 For more information on fracking’s impact on U.S. emissions and electricity rates, see my article, “How Fracking Has Contributed To U.S. CO2 Emission Reductions”

Graph 2 demonstrates the increasing dependence of Europe upon Russian gas exports as its domestic production plummets. 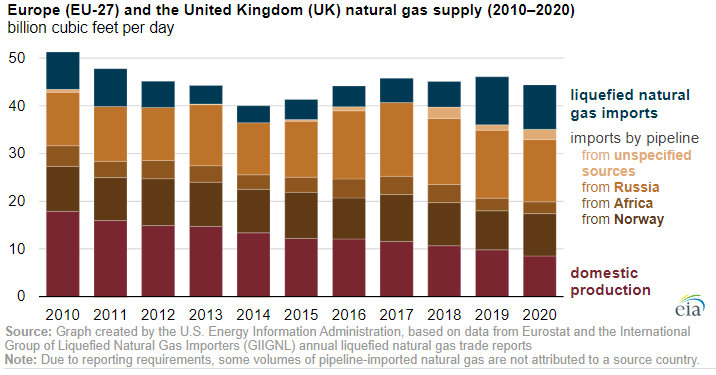 European companies have boosted imports of liquefied natural gas, and have secured more deals for longer-term supply mainly from US providers. However, incremental purchases are set to reach 80-100 billion cubic meters by 2026, or about 60% of the volume imported from Russia in 2021, according to Bloomberg Intelligence.

Pipeline imports of natural gas into the region come from Russia, Norway, North Africa, and Azerbaijan. Pipeline imports originating in Russia, the largest supplier in the region, grew from about 11 billion cubic feet per day (Bcf/d) in 2010 to more than 13 Bcf/d in 2020 (a low consumption year due to COVID-19 related impacts).

Although LNG imports made up about 26% of all natural gas imports, they provided about 20% of all of the natural gas supplied to the EU-27 countries and the UK in 2020. LNG imports tend to fluctuate from year to year, from as low as 3.6 Bcf/d in 2014 to as high as 10.1 Bcf/d in 2019, depending on global natural gas prices, demand driven by cold weather, and the availability of pipeline supplies. Most LNG delivered to Europe is supplied through long-term contracts.

Regional natural gas demand fell rapidly between 2010 and 2014, and then it stabilized during the five-year period from 2016 to 2020 at approximately 45 Bcf/d. Natural gas consumed by the European industrial sector, where fuel switching is difficult, remained nearly unchanged, averaging 13.7 Bcf/d throughout the 2010–2020 period.

Carrying that same strategy to sway public opinion from fracking in Europe to the U.S.:

Russia’s war machine financed by oil and gas sales to a captive market:

Oil and gas are the big-money sources for Russia’s war financing. If Europe cut off shipments completely, it would cost the Kremlin, at current prices, more than $250 billion a year. About half of Russia’s 7.5 million barrels per day of crude and product exports go to Europe, meeting about 35 percent of total demand.

Natural gas is the biggest challenge, because of Europe’s high dependence on pipeline delivery from Russia, normally about 35 percent of E.U. demand, but fluctuating down to 25 percent. While liquefied natural gas (LNG) has brought much additional gas to Europe and with more to come, there is not enough additional LNG capacity globally or sufficient LNG infrastructure in Europe to offset a shortfall from turning off the Russian spigot.

In summary, the key points are:

This has been true and known for so long, but getting away from the dominant suppliers has unfortunately been low on the priority list. We're seeing now the damages of that arrangement, and hopefully those lessons will be learned when it comes to energy systems of the future (e.g., let's start diversifying the critical material supply chains for batteries and other cleantech now so history doesn't repeat itself!)

The lessons must be learned. But the failure of the European energy policy authorities in this matter is incomprehensible. What has happened lives up to the name of the Nobel prize winner in literature Gabriel García Márquez: "Chronicles of a death foretold".

You are correct, German. A failed energy policy moving to another source of energy without 100% confirmation that it can provide the same level of service and reliability of the past. Not the way to run a business, country, or continent.

Matt, yes, so true. Having the false security of Russian hydrocarbons without a viable alternative is always dangerous and callous of the EU country leaders. They reap what they sow unfortunately.

Essentially right, although Europe may develop renewable energy at a fairly fast clip, and there may be some help from Brazil.

Julian, they will potentially have even a more difficult winter of '22-'23 as the base volume of gas delivered into Europe is reduced, and storage will require more supplemental gas to make up the gap.