Price rally on the energy markets

Energy crunch in Europe? Energy prices have been breaking one record after the other for a few weeks now. Where is the extreme rise in electricity, coal and gas prices coming from? Is the price rally a short-term outlier or a sign of higher energy prices in the future? In this article we explain the most important global and regional causes of the current price movements in the energy markets.

“Energy suppliers file for bankruptcy” or “Shortage of fuel in Great Britain” - headlines like this have been making the rounds for a few weeks. The prices for electricity, gas and coal have risen in the past few weeks to the highest levels since the beginning of the liberalized energy market or at least within the last 15 years.

A price rally that is second to none

The price for the supply of electricity in the German market area for the year 2022 reached over EUR 150 / MWh at the beginning of October. The prices for the gas front month at the Dutch trading point TTF were up to 120 EUR / MWh on October 5, 2021, and coal prices for delivery in November also rose to over 260 USD / ton.

Every day, it seems, higher prices are being reached that just a few months ago belonged to the realm of the imagination. Figure 1 shows the percentage price movement for electricity, gas, coal and CO 2 since the beginning of 2021 (source: Montel ). On October 6, 2021, prices on the energy market collapsed. The high volatility of prices therefore clearly harbors great uncertainties and risks.

Figure 1: Percentage price development of the German power front year (candle sticks), the CO 2 certificates with delivery December 2022 (red line), the front year gas at the TTF (green line) and the front year coal (yellow line) from the beginning of 2021 to the 11th October 2021 (Source: Montel)

Since the beginning of September there has only been an upward path for energy resources. It can be clearly seen in Figure 1 that the CO 2 certificates (red line) only played their role as the main price driver for electricity until July. However, the record prices at which electricity is traded on the energy exchanges today is mainly due to the unprecedented rise in prices for gas (green line) and coal (yellow line). So it is hardly surprising that electricity prices are at the highest level even in a long-term comparison (see Figure 2). The price peak that was reached before the global financial crisis in 2008 is far exceeded today. At the beginning of October 2021, the electricity prices for base load delivery in 2022 were almost twice as high as 13 years ago. 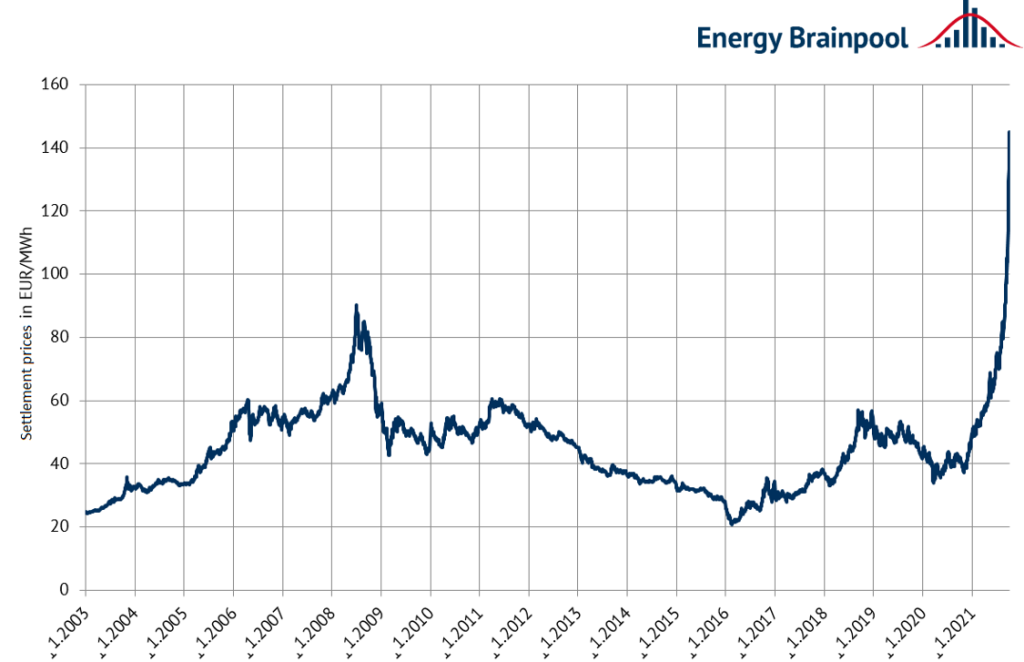 Figure 2: Front-year prices for the delivery of base-load electricity for Germany, as of October 5, 2021 (Source: Energy Brainpool)

Where is the extreme rise in electricity, coal and gas prices coming from?

Viewed globally, different events led to the currently very high energy prices in Europe. A low feed-in from renewable energies in 2021, the high CO 2 prices in the European emissions trading system due to increased climate protection efforts or the discussions about the Nord Stream 2 gas pipeline are, as individual and simple reasons, hardly responsible for the current price situation. Rather, one can speak of a perfect storm, i.e. the meeting of different, partly interdependent, but also independent factors, which ultimately cause these very high prices. The various reasons are classified below.

The main global and regional causes of current price movements

In particular, the feed-in of wind energy in Germany has so far been well below average in 2021. As a result of the increasing demand during the coronavirus pandemic, conventional power plants had to generate more electricity. This increased the demand for gas and coal and drove up the prices of the two raw materials.

In addition, in July 2021, the EU Commission published its “Fit for 55 package” to implement increased climate ambitions. The prices for CO 2 certificates rose even in the run-up to the publication of the proposals for adapting the European emissions trading system . Market participants anticipated the potential future shortage of emissions certificates in prices since the beginning of the year. As a surcharge on the electricity generation costs of fossil fuel power plants, the higher CO 2 prices also led to rising electricity prices.

On the fuel side, there were frequent delivery restrictions in the course of 2021 for the hard coal traded on the world market. These were caused by strikes and natural disasters in important producing countries such as Colombia and South Africa. At the same time, global electricity consumption rose again in 2021 compared to 2020. The reason for this was, in addition to a revitalized economy, the need for electricity for cooling systems due to the very hot summer in Asia. A restricted supply situation met higher demand for coal and boosted prices.

In the case of gas prices, too, higher demand was met with moderate supply. A very long heating period in Europe until May was replaced by the heavy use of air conditioning in Asia throughout the summer of 2021 and fueled the global demand for gas. Therefore, compared to previous years, filling of the European gas storage facilities did not start until around June. The low storage level can also be seen in Figure 3, which shows the filling level of German gas storage facilities at the beginning of each month from 2016 to 2021. 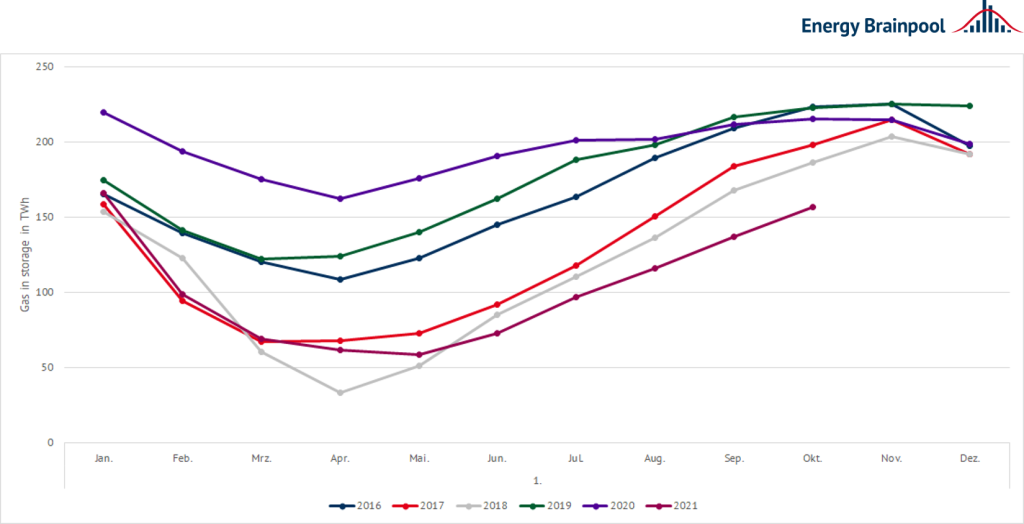 Figure 3: Fill level of German gas storage facilities at the beginning of the month 2016-2021 in TWh (source: Energy Brainpool)

Liquefied natural gas (LNG) deliveries went to Asia over the summer, as customers were more willing to pay. South America also recorded higher imports of LNG, which had to compensate for the low level of electricity generated from hydropower by gas-fired power plants due to droughts and lower water levels (source: Timera ). The geopolitical debate about the new Nord Stream 2 gas pipeline and Russia as a gas supplier also came to a head: Despite the high prices in Europe, Gazprom did not book any capacity bookings on gas pipelines via Ukraine and Poland beyond the existing contracts.

As of the beginning of October, gas prices are the biggest driver of electricity prices. Should a mild winter be around the corner and the filling levels of the gas storage facilities continue to approach the long-term average, a reduction or at least a stabilization of the gas and thus also the electricity prices can be expected.

Nevertheless, handsome prices seem to have been set for this winter. Only in the spring of 2022 does the price-forward curve of the front products for the base load supply of electricity point back down again (see Figure 4). On the market side, prices can therefore be expected to normalize from the middle of next year. 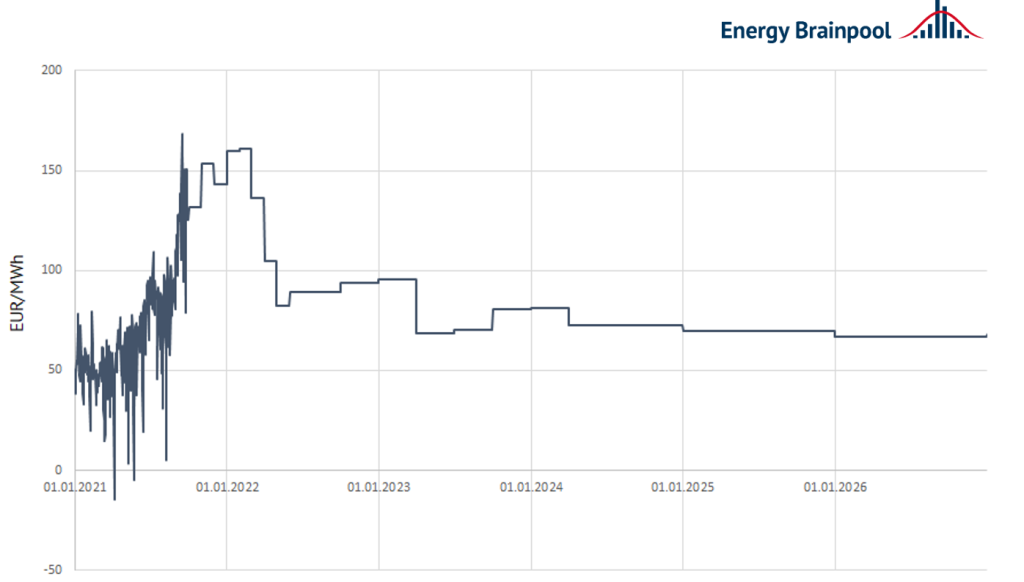 Figure 4: Price-forward curve for base load delivery of electricity in Germany on the EEX in EUR / MWh from the end of September 2021 (source: Energy Brainpool)

In any case, energy suppliers are forced by the high price phase to deal with their procurement and sales strategies and possibly to convert them. A consideration of the geopolitical contexts as well as strategies for hedging price risks are inevitable in this volatile phase and are becoming more and more important as the global gas markets continue to grow closer together.

But this market development also offers new opportunities for additional income for operators of EEG systems. As alternatives to the market value-based remuneration model, additional fixed price regulations are available within the market premium model as well as a short-term switch to other direct marketing.