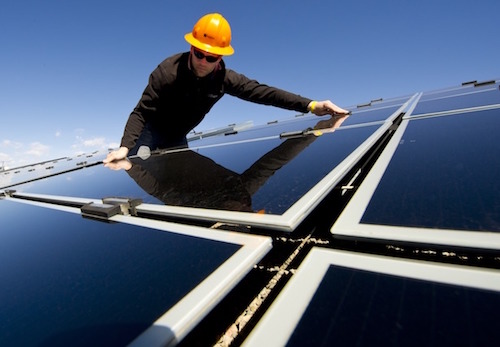 With projected oilfield job losses of 30% by the end of 2020, the fossil sector is likely to remain highly embattled after the threat of COVID-19 has abated, with little ability to create new jobs. But the job-intensive green energy sector could be set to flourish, particularly if policy-makers include some variant of a Green New Deal in their plans for secondary stimulus packages, a new analysis shows.

Post-pandemic, “the industry will face a world in which capital markets remain scarred (and still worried about climate change), inventories have ballooned, and previously reliable OPEC+ can’t be taken for granted, ” writes Bloomberg. Already, as the industry increasingly lost “easy access to capital markets,” oil and gas job numbers had been tanking even before COVID-19 devastated the U.S. and global economy.

And yet, at the very moment when “the economic and political imperative is putting Americans back to work,” staying afloat as a fossil fuel company will mean keeping the ranks thin, rather than expanding the payroll. By contrast, the numerous Green New Deal proposals that appeared on the scene last year, conversely, are very much poised to appeal to policy-makers anxious to deploy stimuli that will resuscitate the American economy—and to a public desperate for jobs.

One of the “hallmarks” of those GND proposals is “how they linked environmental policy with broader populist themes like job creation and investment in public infrastructure,” Bloomberg notes, adding that such a linkage “is tailor-made for a scenario of large-scale government intervention focused on getting people back to work, especially given the make-up of the energy-related labour force.”

Further, a third of those green energy jobs are connected to construction, compared to just 13% for fossil fuels.

While stimulus is being debated, the news agency adds, Green New Deal proponents should “hammer” that last point: “While the economics of extraction are both geographically concentrated and dependent on limiting head count, electrification and renewables expansion demand more workers for construction roles deployable anywhere.”

Another growth sector is energy efficiency, which in 2019 employed 2.4 million Americans. Of those jobs, 56% were in construction, many of them involving building upgrades.

Many of those jobs are on hold during the COVID-related lockdown. But in post-pandemic America, the dual imperatives of job creation and climate action will likely turn toward an energy sector that needs a large work force to build the complex structures that will hold climate change in check. That need will give green energy a “working advantage” over a fossil industry that is supporting fewer and fewer people in its work to extract the very commodities that are driving the climate crisis, Bloomberg says.