At a dinner debate in Brussels on European relations with Russia, members of the European Parliament made it clear they regard Russia as an enemy which should be opposed in any possible way. That includes projects such as Gazprom’s planned Nord Stream 2 pipeline. Whether EU institutions have the means to stop Nord Stream 2, remains to be seen.

The hosts of the Deep Dive Dialogue on “the European Energy Partnership with Russia in Difficult Times”, held in Brussels on Thursday evening 23 March, afterwards felt that they perhaps “got more than they bargained for”.

The intimate event was organised by Friedbert Pflüger, Director of the European Centre for Energy and Resource Security (EUCERS), King’s College London and a former Deputy Minister of Defence in Germany, and hosted by Klaus Schäfer, CEO of Uniper, the power production company split off from Eon – a large customer of Russian gas. It was primarily intended to ‘exchange views’ with four prominent members of the European Parliament (MEPs), all critical of Russia in general and Gazprom’s Nord Stream 2 pipeline project in particular.

“There is no case against Nord Stream 2. But to you Russia is simply the enemy”

Uniper was one of the prospective shareholders of Nord Stream 2, with Engie, OMV, Shell and Wintershall, that were forced to withdraw last year as shareholders, as a result of Polish pressure, but the company is still a strong supporter of the project. Pflüger is also on the record as a supporter of the pipeline that is to bring 55 bcm of gas from Russia direct to Germany through the Baltic Sea – bypassing Ukraine and Poland, just like Nord Stream 1. Schäfer and Pflüger had invited a number of prominent academics and businessmen to make the case for Nord Stream 2 vis-à-vis the MEPs.

But in the Stanhope Hotel in the heart of Brussels’ European Quarter, they discovered that resistance to Nord Stream 2 among MEPs is strong indeed. “Emotional”, as one of the participants called it – but the MEPs – Christian-Democrats Elmar Brok, Michael Gahler and Othmar Karas and Green MEP Reinhard Bütikofer – rejected that description. “Animated”, they preferred to call their critical stance.

In fact, the discussion – which lasted four hours, including two over dinner – could be described as a collision between the political and business worlds.  One of the businessmen present (I can’t attribute quotes because the meeting was held under Chatham House rules), after having listened to the MEPs, observed: “The objections to Nord Stream 2 are not really about economics or even security of supply. There is no case against Nord Stream 2. But to you Russia is simply the enemy.”

Indeed the MEPs made it quite clear that resentment of Vladimir Putin’s Russia runs very strong in Brussels. They were all of the opinion that the German-led attempt to create a “modernisation partnership” with Russia came to an end in 2012,when Dmitry Medvedev and Putin swapped jobs as President and Prime Minister, and it became clear that Putin had no intention to loosen his grip on power or to “reform” the economy according to western prescriptions.

“The partnership has failed”, declared one of the MEPs. “Putin decided to maintain Russia as a petro-state. He uses energy as a political weapon. He invaded Ukraine. And he is doing everything he can to undermine the EU and our democratic system.”

Few would dispute this assessment. The question is: how do you deal with it? Why ‘pick on Nord Stream 2’, the businessmen and academics asked? Why not, for example, boycott Russian gas (or oil) across the board, if you want to retaliate against Russia’s invasion of Ukraine? “Nord Stream 2 is held hostage to the political conflict over Ukraine”, one speaker complained.

This criticism is difficult to argue against and the MEPs did not directly respond to it. It is quite obvious that they feel that Nord Stream 2 simply presents them with a convenient opportunity to strike back at Russia. If that is opportunistic, they seemed to be saying, so be it.

But is there anything the EU can actually do to stop Nord Stream 2? Strictly speaking, no, the MEPs admitted. What the EU can do – and the European Commission has insisted it will do – is to make sure that Nord Stream 2 is subject to EU energy legislation. The question is what this means exactly. On this the opponents and supporters hold diametrically opposite views.

The opponents say Nord Stream 2, even though it is an offshore pipeline, should be subject to the Third Energy Package, including its provisions relating to ownership unbundling and third party access. This would mean that Gazprom could not use the pipeline to its full extent, but would have to share its usage with other suppliers. That would seriously undermine the business case for the pipeline.

And as one of the participants in the debate pointed out: it would be pointless to make third party access rules apply, because no other supplier would want to make use of it, unless perhaps they would be other Russian suppliers, if Russia took away Gazprom’s export monopoly.

The issue is now a subject of debate between the Bundesnetzagentur, the German regulator, and the European Commission.

Jochen Homann, President of the Bundesnetzagentur, sent a letter to Director-General Energy Dominique Ristori of the European Commission on 3 March 2017 (a copy of which is in the possession of Energy Post), stating clearly that in his view Nord Stream 2 should not be subject to the Third Energy Package. He writes: “”Wie Ihnen bekannt sein dürfte, unterfallen nach Rechtsauffassung der Bundesregierung Offshore-Verbindingsleitungen aus Drittstaaten in die Europaïsche Union nicht den Regelungen des dritten Energiebinnenmarktpaketes, was die Regelungen zur Entflechtung einschlieβt. Dem schlieβe ich mich uneingeschränkt an.” (“As you will know, the German federal government believes that offshore-connections from third states to the EU do not fall under the Third Energy Market package, which includes unbundling rules. I unreservedly subscribe to this viewpoint.”)

Homann in his letter also refers to an opinion of the Legal Service of the European Commission, which has not been made public but was reported on by the website Politico (and of which Energy Post also has a copy – for more on this see my article Can Nord Stream 2 be stopped? published in April last year). In this advice, the Legal Service also rejects the idea that Nord Stream should fall under the Third Energy Package. “Auch der Juristische Dienst der Kommission teilt offenbar diese Rechtsauffassung in einem internen Rechtsgutachten [legal opinon] zu Nord Stream 2”, writes Homann.

Nevertheless, the Commission itself seems to feel differently. EUObserver reported on 14 March that Maroš Šefčovič, the EU energy union commissioner, told a group of reporters in Brussels on 13 March that he was in talks with the Bundesnetzagentur on the issue. “The commission’s approach is that once this offshore pipeline reaches exclusive zones and territorial waters of the European Union, it’s quite clear that the core principles of EU law should be applied,” he was reported as saying.

Šefčovič said these core principles were “unbundling, tariff setting, capacity allocation, third-party access”. He added, “We have to avoid a legal void or the situation where the whole offshore part of the pipeline would be built just according to Russian law”.

Nord Stream 2 passes through the exclusive economic zones of Finland, Sweden, Estonia, Latvia, Lithuania, Denmark, and Germany (and the territorial seas of the latter two states). So of course does Nord Stream 1, which follows the same route – and is not subject to the principles Šefčovič mentioned.

“Ukraine are our friends. Russia is not” 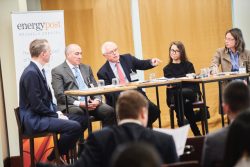 The commissioner’s suggestion that if the Third Energy Package does not apply, the pipeline “would be built just according to Russian law”, seems rather odd. The Nord Stream 2 company will need construction permits from all the countries involved, as Paul Corcoran, Financial Director of Nord Stream 2 said in a panel debate on 8 March in Brussels, organised by Energy Post. It is in the process of submitting these applications. Hence Corcoran rejected the idea that Nord Stream 2 would be built in a “legal void”.

Despite Šefčovič’s public assertions, the European Commission has not made any formal moves or announcements with regard to the compatibility of Nord Stream 2 with EU energy law. The Baltic States, Poland and the Nordic countries have asked the Commission to do so, notes EUObserver, but “Šefčovič has declined to do that, saying it was not the commission’s job to pre-evaluate private projects and that it would be hard in any case because the Nord Stream 2 legal models kept changing”.

Šefčovič calls Nord Stream 2 a private project because Germany and Russia are not planning to sign an intergovernmental agreement (IGA) on Nord Stream 2, as is usually the case for international pipelines. EU institutions have just agreed on certain oversight rules for IGA’s (for more information on this see this article on Energy Post Weekly – subscription required), but cannot use them in the case of Nord Stream 2.

Needless to say, at Uniper’s event in Brussels, many other arguments were exchanged. Does the EU need more gas, questioned the MEPs? Maybe, maybe not, was the answer, but that’s a risk for Nord Stream 2 to take.

Nord Stream 2 will increase dependence on Russian gas and therefore hurt security of supply, said the MEPs. Not so, said some of the experts: as long as the EU has a competitive gas market, Gazprom cannot abuse its dominant position.

We should show solidarity with Poland and Ukraine, said the MEPs. But they don’t need Russian gas for themselves, was the reply – their interest is purely commercial, as transit countries. That means solidarity is not called for. (And talking about security of supply, do we want to depend on Ukraine?)

But in the end for the MEPs Nord Stream 2 was and is a “political project” and for this reason, in the current political climate, it should be opposed. As one of them said: “Ukraine are our friends. Russia is not”.

Some of the academics at the debate warned against Brussels using its regulation as a political weapon. The MEPs agreed with that, but they still felt application of the appropriate legislation could lead to an unfavourable outcome for Nord Stream 2. Whether or not this is true, remains to be seen.

Europe’s demand for gas will increase in future years, and the quantities transiting through Ukraine and Poland will be nearly unchanged.

If Poland and Ukraine colluded to increase transit fees, Russia would have alternative ways to supply its gas to Europe.

In the near future, Turkey will use more Russian gas and become another transit country to supply Greece, Italy, etc.