Those who are interested in the issue of nuclear waste might want to have a look at this series of 3 podcasts provided by Deep Isolation.  Keep in mind that this is a company that is developing the idea of geological isolation of high level nuclear waste. Regardless of what one may think of the podcasts, the CEO makes a point worth reporting here:

Just a few highlights of the first podcast (about 20 minutes):

The speaker is from Science Matters.

My comment: Have a look.  I hope you agree that it is not a bad use of 20 minutes.

The speaker is from the Nuclear Energy Institute (NEI).

My comment: Hard to disagree with that last part.

The speaker is from Keene State College

A few notes from the conversation:

My comment: Sorry to be cynical, but Fat Chance, at least for the time being.

The blame is squarely on the politicians.  The answer may be to set up an independent body with power to move forward toward national consensus wholly without political involvement.

I agree that many of nuclear's faults come down to the political feasibility of it all, especially when looking at waste sites and some of the strongest NIMBYism that we've seen out there. It makes me wonder-- has there been a comparable industry topic that's been so emotionally driven to make it politically infeasible that actually was overcome (whether via a suggestion like this or otherwise)? I think back to some turn of the century cartoons like the one below from people who were anti-electricity, which obviously lost the battle-- but are there modern examples? 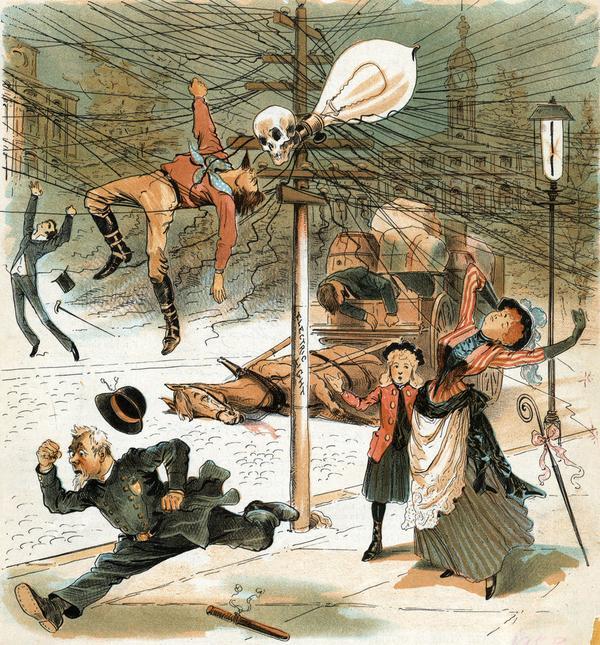 Where did you find that cartoon, Matt? Another beneficial technology forestalled by irrational fear.

I had found it on social media (vaccination is a good one-- this was in response to people's fears about 5G and somehow connecting it to COVID), but through a search best source for information on the cartoon can be found here: https://library.osu.edu/dc/concern/generic_works/g73303697#?c=0&m=0&s=0&...

Mark, thanks for providing these podcasts. They show three viewpoints (actually four, including the moderator) of the storage of nuclear waste, and three different levels of understanding of the dangers of radiation.
Let's start with the introduction, where misperceptions are already coming out of the announcer's mouth, fast and furious:

"No country has established a permanent home for spent nuclear fuel."

Whether spent nuclear fuel should ever be placed in a "permanent home" is controversial:
• It would only be used to placate the irrational fears of people with a poor understanding of its risks over time.
• It's valuable. Only 5% of fissionable uranium in spent fuel rods has been used, so it can be recycled - many times - to provide fresh nuclear fuel for hundreds of years into the future.
• It is dangerous for up to 1,000 years, so if it's not immediately recycled it's ideally stored in an underground repository like Yucca Mountain, in railway cars on tracks, so it can be recovered when necessary.

"In the U.S. alone, one in three people live within 15 miles of a storage site!"

High level nuclear waste in dry cask storage is not liquid or a powder. It's in the form of extremely heavy, metal rods gathered together in bundles. Even if a dry cask tipped over it wouldn't break open. If it was forced open, and the metal rods were pulled out by a very determined terrorist, he wouldn't get very far (he'd be dead within minutes). Then, specialists in shielding would show  up and clean up the mess he made, put it back into another dry cask, and go home. People outside the plant's boundaries would have nothing to worry about, people who lived 15 miles away, less than nothing.

Finally, I'd like to point out it was the moderator who used the word "scary", and here's how he used it:

"When I visited one of the plants, you see guys out in front with machine guns, and fences, it's kind of scary, you're absolutely right. Below ground, it's no longer as scary."

But McCullum had never said waste stored in dry casks was "scary" - no nuclear professional would say that. It's what the moderator heard, because of his (mistaken) preconceptions of the danger of stored waste. The only real challenge is public misperceptions - the "reputational damage" that McCullum refers to.