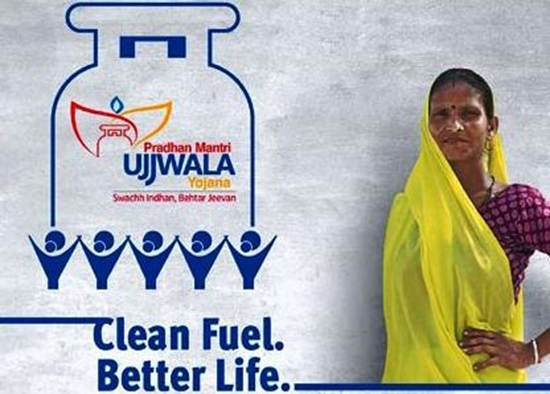 PMUY: The LPG revolution in India

Every year in India, indoor air pollution, caused mainly by burning traditional biomass, leads to an estimated 1.24 million premature deaths. Providing clean and affordable energy has now proliferated into environmental, political and economic discussions profusely. It is not a surprise that United Nations has dedicated “access to affordable, reliable, sustainable and modern energy for all” as a Sustainable Development Goal (SDG). Access to clean cooking fuels in India has hitherto remained with upper middle classes in India. Touted as a ‘luxury’ – a Liquefied Petroleum Gas (LPG) connection with all its paraphernalia has remained invisible to the rural eye for decades. Using firewood for energy and inhaling toxic smoke while preparing food on chulha has been the rural way of life. Against this contemporary backdrop, on 1st May, 2016 comes an ambitious social program in India – Pradhan Mantri Ujjwala Yojana (PMUY).

PMUY was launched with an aim to safeguard the health of women and children by providing them with a clean cooking fuel – LPG. The scheme aimed to provide 50 million deposit free LPG connections to women who were devoid of LPG access and belonged to Below Poverty Line (BPL), which were to be identified from Socio Economic & Caste Census (SECC) -2011 list. The target of scheme was revised to 80 million LPG connections. The scheme also provided an optional loan facility from oil marketing companies (OMCs) to cover the cost of stove and first refill, recovery of which was to be made from the subsidy accruing to the consumer on LPG refills under Direct Benefit Transfer (DBTL).

According to the official PMUY website, the government had achieved the target of 80 million connections in September 2019, seven months before the original deadline of March 2020. The Comptroller and Auditor General (CAG) 2019 report on PMUY mentions that all India LPG coverage increased from 61.90% in May 2016 to 94.30% in April 2019. PMUY has also been the driving force for the decline of traditional/non-commercial biomass’s share in India’s energy mix by about 2% during last 3 years.

The early promises: Success at all fronts

PMUY has catapulted India to the position of the second largest user of LPG, surpassing China and Japan and only behind USA. Connections under PMUY are provided in the name of an adult woman of the household, irrespective of her marital status, and the subsidy is transferred to her bank account. Given that the beneficiary requires a bank account, this was expected to further improve the financial inclusion of rural women. Further, according to a survey, the cooking time per meal is 20 minutes more with firewood as compared to LPG. Assuming 3 meals a day, this effectively implies 1 hour of additional spare time which can be utilized by rural women to generate additional income.

While obtaining the approval of Cabinet Committee on Economic Affairs (CCEA) for PMUY, Ministry of Petroleum and Natural Gas (MoPNG) mentioned that the scheme has a huge potential for generating direct & indirect employment of around 1 lakh and provide business opportunity of at least INR 10,000 crore over the next 3 years to the Indian industry. This scheme has also provided a great boost to the current Make in India campaign by providing domestic orders to manufacturers of cylinders, gas stoves, regulators, and gas hose. OMCs have put up new plants and augmented the capacity of the existing plants to meet the market demand of LPG. Addition of 4500+ new distributors and increase of manpower in existing distributorships has provided employment opportunities to rural people. Many self-help groups have been pressed into service to impart training to the beneficiaries.

At the environmental front, how can a policy advocating LPG usage gain fame? First, cutting and harvesting wood would cause an already clean energy deficient India to another grave problem – deforestation. Second, the emissions from wood based fuels emit a number of other gases (methane, carbon black, etc) that has both environmental and health effects. Third, as compared to a traditional chulha, a LPG stove is more efficient and requires less input energy to produce the same useful energy for cooking. Owing to all of this, the environmental trade-off by using LPG based stove is much greater than using wood based chulha.

All is not well: Challenges ahead

At one end, where PMUY has helped increase LPG penetration in India, it has largely impacted its import bills too. While the indigenous production of LPG has not increased at the same rate as its consumption, OMCs’ dependence on import has drastically increased from 6567 TMT in 2013-14 to 13194 TMT in 2018-19 – an increase of nearly 100%. The data from the Petroleum Planning and Analysis Cell (PPAC) reveals that the LPG import bill has increased from USD 5.9 billion in 2013-14 to USD 7.2 billion in 2018-19 – an increase of nearly 22%.

Another challenge identified by the CAG 2019 report is that the increase in LPG distributors is not proportional to the increase in LPG connections. Non-commissioning of targeted number of LPG distributorships has been compelling the existing distributors to supply cylinders to long distances and deliver cylinders at warehouse or designated points instead of door-step delivery. This has resulted in considerable delays in supply of cylinders. Also, with no backup cylinders with people, there is a high attrition rate and a tendency to switch to alternatives.

The CAG 2019 report also highlights a number of discrepancies with regards to selection of beneficiaries and distribution of connections. Although PMUY envisaged release of LPG connection in the name of woman, 1.88 lakh connections were released against males. Lack of input validation check allowed issue of 0.80 lakh connections to beneficiaries aged below 18 years. Further, data revealed mismatch in name of 12.46 lakh beneficiaries between PMUY database and SECC-2011 data. Delay of more than 365 days was noticed in installation of 4.35 lakh connections against stipulated time period of seven days. Risk of diversion of domestic cylinders for commercial use was noticed as 1.98 lakh PMUY beneficiaries had an average annual consumption of more than 12 cylinders which seems improbable in view of their BPL status.

Instances of unsafe LPG practices by PMUY beneficiaries were also observed during a beneficiary survey by CAG. Some of these were instances when stoves being kept on ground/below the level of cylinder and usage of non-standard hose pipe. Departure from safety norms were noticed during test check of 18558 KYC records as pre-installation inspection report was not available in 2531 cases (13.64%). Similarly, installation certificates were not available in 2367 cases (12.75%).

The CAG committee also noticed an excess parking of funds under Corporate Social Responsibility (CSR) pool which was contributed by the OMCs on the directives of MoPNG without any realistic assessment thereof. As of 31st March 2019, an amount of INR 261.85 crore is lying idle which could have been utilized elsewhere in other deserving projects.

The biggest evident bottleneck here is encouraging a sustained LPG usage. The CAG 2019 report revealed that the average consumption of 19.3 million PMUY consumers (who have completed more than one year as on 31 March 2018) was only 3.66 refills per annum. Similar analysis for 31.8 million PMUY beneficiaries as on 31 December 2018 revealed that refill consumption declined to 3.21 refills per annum. There are two reasons to this: the high cost of LPG refill even after subsidization and the easy availability of cheaper alternatives like firewood.

Historically, the societal challenges in a rural country like India has caused downstream bottlenecks in many government programs. The decision making genetics in rural Indian households has traditionally remained with men. Cooking in rural India has a gender bias, with women primarily bearing the responsibility of collecting fuel, storing it and preparing food. This cooking responsibility leads to disproportionately high pollution exposure to women and, in turn, a high burden of disease. Because the man decision-maker is typically not responsible for cooking and often works outside the house, he has less incentive to adopt modern cooking fuels that are clean and convenient to use. Also, behavioral studies have found that rural Indians prefer the taste of food made on chulha better than that on LPG stove.

A stimulus: In times of a pandemic

Since January 2020, the world has been witnessing the rise of the coronavirus pandemic. Until March 2020, the virus has affected around 8 lakh people and killed more than 40,000 globally. India too has not been spared by the might of this micro-organism. On 25th March 2020 – the Government of India declared a nationwide shutdown for 21 days. All non-essential services, educational institutions, business services, etc. came to a grinding halt. Presumably, with nearly 1.3 billion population restricted to their homes to practice social distancing, the country would require an uninterrupted supply of LPG. With scores of daily wagers away from work and an eminent recession nearby, the government of India pushed the metal with its PMUY pedal. In such unprecedented times, LPG cylinders for the next three months have been made completely free for all PMUY beneficiaries. This is a major relief for 8.3 crore BPL families, who either were staring at a future without food or would have shifted back to traditional wood based fuels.

This is just the beginning: Sustainability is the key

Indeed, this is just the beginning. The road for complete changeover to clean cooking fuels is way longer. The road to “affordable, reliable, sustainable and modern energy access for all” is even further. But this is just a start, and a start in the right direction. A huge country like India needs many more environmental and social programs to reach the coveted title of a developed nation. PMUY is a testimonial to the fact that even in villages and households with patriarchal gender norms, interventions that specifically empower women to make decisions related to cooking and other gendered aspects of daily life hold promise.

It is true that India needs such reforms. And it needs it quickly. However, to ensure the successful implementation of such reforms, there is one cardinal thing India needs desperately – the correct sustainable mindset. The sustainable mindset to change and accept changes. The sustainable mindset to accept clean cooking fuels and abandon old traditions and customs. There needs to be a bottom to top eradication of the archaic mindset. To ensure India does not miss to catch the train of environmental sustainability, the correct time to act is now. What we do now will decide our future.