image credit: Approved to Use

The Cabinet Committee on Economic Affairs (CCEA), Government of India (GOI) launched the Kisan Urja Suraksha Evam Utthaan Mahaabhiyan (KUSUM) program and approved a central financial assistance (CFA) package of $ 6.8 billion in February 2019. The program aims to add a solar capacity of 25.75 GW by 2022 in the agriculture sector and is a subset of India’s broader commitment to Renewable Energy (RE) installed capacity of 175 GW by 2022. While in the first phase, KUSUM program aims for only 4GW of capacity by installing 1.75 million standalone solar powered agricultural pumps and 1 million grid-connected solar-powered agricultural pumps, there is immense potential and need to “solarize” the agriculture pumps in India. By converting the 29.3 million conventional pumps alone, India will be able to meet 38.1% of its 175 GW – RE target and 66.8% of 100 GW – Solar target. The country can save $ 12.7 billion forex spent on imported coal and diesel, and farm power subsidies of $ 7.6 – 10 billion. This program gives an immense opportunity to reduce the 276. 5 million tonnes of carbon dioxide emissions from reduction in use of fossil fuels.

To make complete sense of the water-energy nexus in India’s agriculture sector, we need to look back on India’s policy priorities since Independence. With steady increase in population pressure on India’s farm land, India needed to come up with fixes to feed everybody. Since total agricultural land was fixed, the only way out was to improve the agricultural productivity. But this required year-round access to irrigation. Tube well technology was new and inaccessible to subsistence farmers (85 % of all farmers). Three consecutive years of crippling droughts pushed India to the verge of mass-starvation and left the country at the mercy of food gifts from the US and others. This would mark the beginning of India’s obsession with food security.

Parallelly, Green Revolution was unfolding in India which highlighted the role of irrigation to improve farm productivity. This was also the time when India made massive investments in rural electrification program often times undermining economic sense. Public administrators were given annual quotas for tube well electrification. To further encourage adoption, electricity tariffs per kWh were reduced after specified used. State electricity boards (SEB) were struggling to keep up with associated transaction cost which some studies said were a third of total cost to serve a tube well consumer (REC 1985) yet were forced to serve low revenue customers. “This change from metered tariff to flat tariff for farm power supply set into motion a powerful chain reaction that has fundamentally reshaped Indian irrigation”. This was the beginning of the perverse subsidies subsequently leading to long-lasting market distortions. Utilities were making losses and could not invest in infrastructure maintenance which led to poor electricity supply. This had an adverse impact on rural industries and unhappy farmers formed powerful interest groups to advocate further subsidies.

What we know from the experiments!

We observe that irrigation policy and electricity policy are two sides of the same coin and yet for so long they have been understood and administered in silos. It is only now when 100 m people are staring at a water crisis that the policy framing has taken a more inter-disciplinary route. The policy choices GOI makes now reflect on social objectives of these times. With programs like KUSUM, we see for example, how electricity subsidies interact with the unsustainable groundwater extraction problem and how farmer’s income and available electricity capacity could be reimagined, and how lower carbon agriculture will impact environmental justice and ethics. KUSUM program does not have explicit goals to bring environmental justice and mitigate the looming climate apartheid faced by distressed India’s farmers but it has the potential to do exactly that as a secondary benefit – developing a new “cash crop” and insuring Indian farmers against the unpredictable weather patterns induced by climate change. The program is a result of years of controlled experiments in new models of co-management of electricity subsidies and ground water exploitation within institutions such as International Water Management Institute (IWMI) and states such as Gujarat, Andhra Pradesh and Karnataka under different names and scales.

These studies were vital in understanding the optimal conditions under which these policies are likely to succeed, how economic models interact with social objectives, who are the interest groups and who gains what, how politically feasible is a proposed solution and what are the trade-offs. One such robust program is the DHUNDI Solar Power Irrigator’s Cooperative Enterprise (SPICE), Anand. It is the first of its kind organization where farmers pooled in resources to form a cooperative to lower the transaction cost of DISCOMS to make farmer’s solar projects viable.

Farmers benefitted from the steady supply of power for irrigation, were able to sell back power at Feed-in-tariff(FiT) and earn cash of up to $ 360 per year and still grow select crop under the solar panels. DISCOM was only too happy to not provide 162000 units of electricity at $ 0.001 that cost $ 0.64 to produce. This freed up capacity for high-paying consumers, helped meet Renewable Energy Obligations (RPO) and save on purchase of Renewable Energy Credits’ in secondary markets. Local government saved on massive electricity subsidies and diverted those funds to climate smart solar pumps while enhancing farmer’s income thereby securing vote banks. FiT incentivized farmers to pump only the water they need and evacuate the rest of the power to the DISCOM as opposed to pumping indiscriminately under the “free-power illusion”. Models find that a $ 0.000022 increase in electricity prices per kWh is predicted to reduce groundwater extraction by 3.5 million cubic meters.

Learnings from DHUNDI SPICE can inform KUSUM program. On market side, farmers were not very happy with the FiT of $ 0.065, one of the lowest in India and were compensated by IWMI to a socially efficient FiT that resulted in changed behaviour. Any less or more will work to the detriment of the program. On administrative side, monitoring and assessment were determined as key to success of the program – something the experts say will be crucial for success of KUSUM program as well. Identifying beneficiaries through Unique Identification (UID) will prevent the “creamy” layer from taking advantage of the CFA. Ease of accessing CFA for farmers through a “one window” approach and innovative financing such as pump lease can accelerate solarization. On policy side, while Domestic Content Requirement (DCR) clause where KUSUM directs to source solar panels locally is a non-starter for solar integrators, manufacturers are pushing for the clause to remain to safeguard their own interests. Recent amendment allowing only manufacturers to participate in tenders under the KUSUM program to ensure quality and assure post sales services, puts a question mark on the future of system integrators in India. How the program navigates market economics, administration challenges, and interest groups will decide the future of this program and whether this can be a successful story about energy system transitions in India.

Sushmita Jena is a graduate student (MA 2020) concentrating in Energy, Resources and Environment (ERE) at the Johns Hopkins School of Advanced International Studies. She is focused on policies on improving energy access, sustainable energy transition and deep-decarbonization of the electricity sector. 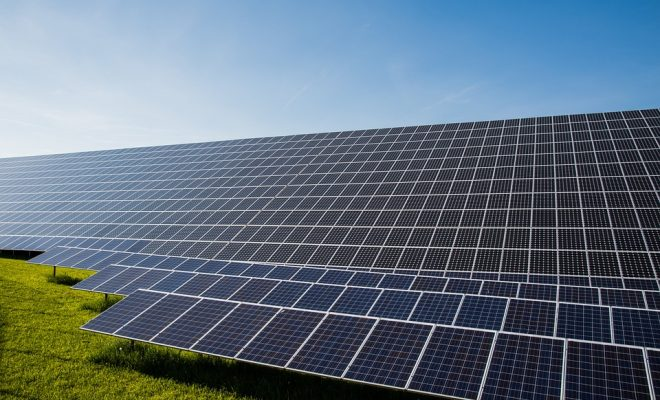