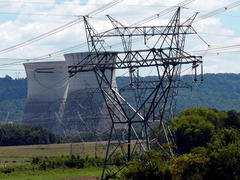 The long running saga of an effort by Tennessee real estate mogul Franklin Haney to buy the partially completed twin 1200 MWe nuclear reactors at TVA’s Bellefonte site in Scottsboro, AL, may have come to an end.

A federal district court judge ruled that TVA was within it rights and did not breach its obligations under the (purchase and sale agreement)” by not going through with it.

With no breach, Haney’s firm Nuclear Development is not entitled to specific performances (of the contract to sell the plant) nor to damages. Therefore, because Nuclear Development’s claims fail, its request for a preliminary injunction were also denied by the court.

U.S. District Judge Liles Burke did order TVA to refund Haney’s down payment of $22 million on the $111 million sale price plus other “uncompensated costs of $750,000” with 7.5% interest calculated from December 2018..

In November 2018 it became apparent that the sale was not going to be a done deal. TVA argued that Nuclear Development had not secured construction permits from the NRC for the two reactors at Bellefonte and because of that, it could not legally go through with the sale.  Nuclear Development, Inc., filed the breach of contract lawsuit in an effort to finish the deal..

Haney May Have Dodged a Disaster of His Own Making

This outcome actually looks to be pretty good for Franklin Haney because in his effort to buy the two plants he boxed himself into a tight corner by betting the ranch that he could complete the reactors and sign the city of Memphis, among others, as a customer for the power. This plan had a lot of factors working against it. In fact, these barriers to success made some wonder why Haney took on the effort in the first place.

First, Haney failed, despite lavish contributions to the political campaign funds of then President Trump, to win federal tax production credits for two reactors that he didn’t own. If granted, once the reactors were completed, could have boosted his early profits from them. Haney’s problem was that the legislation authorizing the credits required the reactors getting them to be “innovative.” The two partially built units are not even in the neighborhood of being “innovative” as intended by the program. They are garden variety PWRs of 1970s vintage.

Second, trying to peal off The City of Memphis, which was a major customer for TVA, guaranteed the utility would throw its full weight behind the effort to prevent that outcome.

If you wanted to see a working metaphor of poking a sleeping bear with a sharp stick, and its reaction, this was it.

Third, TVA was correct that Haney did not have the Part 50 construction licenses from the U.S. Nuclear Regulatory Commission (NRC) which made it impossible for him to raise funds from investors. Haney failed to apply for them prior to the sale.

Not only did he not have title to the property, he didn’t have the regulatory OK to complete the reactors. No investor was going to touch the project until both conditions were met.

Also, because Haney’s plan involved using the NRC Part 50 process, he still had the future expense, and time and effort, to get a Part 50 operating license. When you add the timelines of the two parts together it works out to at least 3-4 years.

Estimating the cost to complete the plants was a crap shoot. One plant was, generously speaking, about 55% complete, having been stripped of almost everything useful. The other was in better shape at an estimated 80-88% +/- complete.

What made the plants attractive is that both had completed reactor pressure vessels and containment structures. However, TVA’s experience with Watts Bar II did not bode well for completing Bellefonte on time and within budget. (more on this below) Also, getting a workforce to show up on a project of this scale could also be a problem.

Fourth, the plants also have connections to the regional electrical grid, but TVA had no obvious interest in letting Haney use it to compete for the multi-state utility’s customers. Sure, there would be litigation, or a regulatory battle at FERC, but with the interest clock ticking on the billions that would be needed to complete the plants, how much time did Haney really have to fight that battle in court before his investors lost patience?

Fifth, TVA never said as much in public, but it is a good bet it that one of its deeper fears is that Haney could run out of money before completing the plant and try to unload it on TVA. With a debt ceiling that doesn’t allow room for a new multi-billion dollar twin reactor rescue plan, TVA was highly motivated to block Haney’s efforts for this reason alone.

Haney might have had visions, as a contingency, of leveraging his significant campaign contributions to republican party coffers for that purpose. TVA would have had an implicit understanding of the throw weight of all those greenbacks the moment they crossed the palms of party fund raisers at Mar A Lago.

From TVA’s point of view such a “rescue” plan was a non-starter. The costs to complete Watts Bar II went nearly 100% over budget at a cost of $4.7 billion which was 55% complete when work resumed on the reactor in 2007. That was just one plant.

In 2011 TVA said the cost to complete one unit of Bellefonte would be $4 billion and that plant is much further along than the other. Before Haney appeared on the scene, TVA spent a boatload of money in 2011 with Areva to carry out engineering studies of what would be needed to complete it..

Also in 2011 TVA’s board of directors voted to complete the two Bellefonte reactors at an estimated cost of $11 billion. Later it hedged its bets saying it would only move forward with the twin reactors after fuel was loaded at Watts Bar II. Once the cost overruns for Watts Bar came due, the Board got cold feet on doing anything about Bellefonte except to unload it from the utility’s books.

Haney Needed a Bigger Boat Plus More Tackle and Line

Haney wanted to complete two unfinished reactors which could easily have a combined cost of more than $13 billion which is a number Haney cited in November 2016 when he first announced his plan to buy the Bellefonte site.

Haney never identified who his potential or real investors were or where the money would come from. While he’s a wealthy man, he didn’t have that kind of cash burning a hole in his pocket.

If he understood all of the financial, regulatory, and engineering challenges he was facing, and given his success in business over time, that’s probably true. But why then did he proceed with the effort in the first place?

To use a famous fishing metaphor, Haney needed a bigger boat to succeed and it appears that he didn’t have one.

As a result of the court decision, Haney gets his down payment back plus some other expenses.  That $23M plus with interest on some of the expenses.

Also, TVA executives might get to sleep better at night at least for now unless Haney appeals.

If Haney is smart, he’ll spend his refund money enjoying time on a nice beach.

Though it would have been nice to see Bellefonte come online, worse to see another case of ratepayer funds wasted through mismanagement and unrealistic expectations.