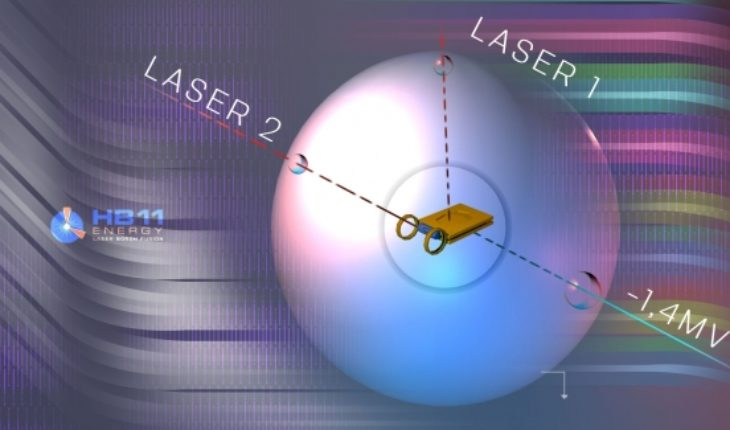 the University of New South Wales reports that HB11 Energy has been granted patents for its laser-driven technique for creating fusion energy.

They would use a largely empty metal sphere, where a modestly sized HB11 fuel pellet is held in the center, with apertures on different sides for the two lasers. One laser establishes the magnetic containment field for the plasma and the second laser triggers the ‘avalanche’ fusion chain reaction.

The alpha particles generated by the reaction would create an electrical flow that can be channeled almost directly into an existing power grid with no need for a heat exchanger or steam turbine generator.

HB11 Energy will use the reaction between hydrogen H and the boron isotope 11 (HB11) as uncompressed solid-state fuel within an extremely high trapping magnetic field. Both of these conditions have been demonstrated by experiments and following predictions from computations.

* a 1 kilojoule laser boosts a magnetic field to 4500-10000 tesla for over one nanosecond. About 100 times stronger than powerful superconducting magnets
* a second laser causes a nuclear fusion chain reaction
* lab experiments have been performed which indicate fusion yields increase by a billion times.
* energy production with a proposed system would be four times cheaper than coal

Ablation compression of spherical HB11 fusion usually arrives at five orders of magnitudes lower energy gains than the DT reaction. However, applying the computations of plane wave ignition with picoseconds laser pulses on solid density fusion fuel, the resulting need of an energy flux E* of 400 million joules per square centimeter for DT was nearly the same as for HB11. This was a surprising gain increase for HB11 by five orders of magnitudes though only binary nuclear reactions as in the case of DT were used for comparison. The reaction producing three 4 He (alpha particles) resulted in an avalanche reaction and using elastic plasma collisions for the exceptionally preferred energy range around 600 keV resulting in a further increase of the energy gains by four orders of magnitudes. These are all together one billion times higher reaction gains than the classical HB11 fusion as measured.

The very first measured HB11 reaction with picosecond CPA laser pulse irradiation resulted in a thousand reactions. Irradiating a laser pulse together with a second one for producing an intense particle beam resulted in more than one million reactions and experiments with a single laser beam of entirely few dozens of ps arrived at billion reactions which agreed with the calculated just mentioned gain increases. In all experiments, the temperature could be estimated below values of 100 eV, or at least many orders of magnitudes lower than of the thermal equilibrium pressures above 100 Million.

Using the knowledge of numerously elaborated and experimentally confirmed cases of interaction of CPA laser pulses in the sub-picosecond range and powers above petawatt, the ignition of fusion of hydrogen with the boron isotope 11 (HB11 fusion) is of high energy gain. Experiments indicated energies above one trillion joules per cubic centimeter for non-thermal pressures. This is the basis for the design of an environmentally clean, safe, low-cost and abundant generator of electricity. The equation of motion for the ignition is dominated by the non-thermal term of the nonlinear force fNL for avoiding the thermal pressures that are in the range above temperatures of 100 million °C.

Nuclear reactions produce ten million times more energy than the chemical reactions e.g. from burning carbon, but the equilibrium thermal pressures for chemical reactions need temperatures of hundred °C while nuclear burns need many dozens of million °C. This is on the level for ITER or at NIF with using nanosecond laser pulses. In contrast, non-thermal pressures can be higher by lasers using nonlinear forces of picoseconds or shorter duration as computer results of 1978 had demonstrated by non-thermal plasma-block acceleration. This is in full agreement with the ultrahigh acceleration measured by Sauerbrey since 1996 thanks to his use of ultra-extreme powers of picosecond CPA-laser pulses. Even the very inefficient classical fusion of hydrogen with the 11B can be used for the non-thermal reaction with sufficiently modest heating in a reactor for generation electricity.