We have witnessed the consequences of ignoring three significant warnings this century; 9/11, the 2008 Financial Crisis and the pandemic and now are countenancing the discounting of climate change.

Instead of observing the science, we are falling for the technologies and politics of prevarication.

Global warming is a problem of thermodynamics. The second law of which says heat flows from warm to cold and never the reverse.

The following schematic of the Pacific Ocean from the equator to the North Pole, the greatest repository of the heat of warming, shows the heat of warming delineated in degrees Celsius where red is hot, dark blue is cold, gray is land and white is the polar icecap. 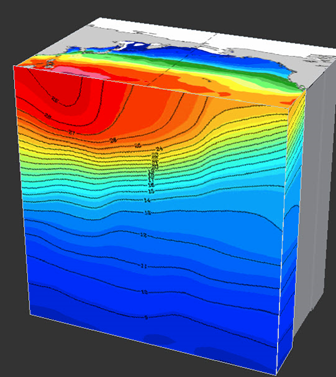 The latitudinal scale of Figure 1 is 10,000 greater than the 600-meter depth of the ocean shown in the schematic.

The movement of heat from the surface into deep water is facilitated by the trade winds which blow heat from east to the west and pile water up to the extent shown in Figure 2 where the Pacific Ocean is close to 30 centimeters higher on the western side than the eastern side of the ocean. 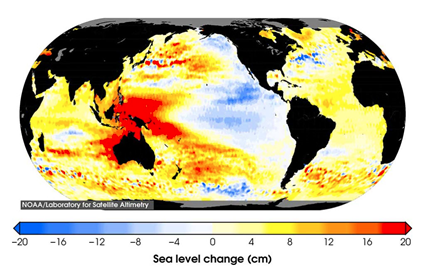 The second law of thermodynamics also states, regarding using heat transfer to do work, it is impossible in any system for heat transfer from a reservoir to completely convert to work in a cyclical process in which the system returns to its initial state.

The following schematic shows how this embodiment of the second law relates to the Pacific Ocean and the potential of the ocean to produce work given the latitudinal scale is 6,000 times greater than the depth of the ocean which reaches a depth of 1,000 meters in this example. 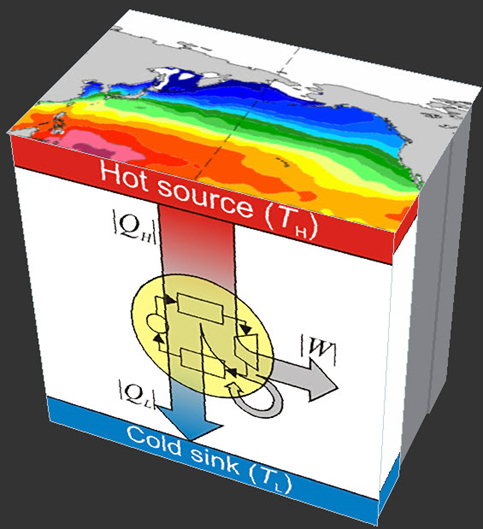 The hot source as represented by the red band of the tropics is the only segment of the heat of global warming capable of producing work, which requires a temperature differential of a least 18oC between the surface and the cold sink to be serviceable.

According to the National Oceanic and Atmospheric Administration, between 1993–2018 the full-depth of the ocean gained between 0.57 to 0.81 watts per square meter of heat and since the surface area of the ocean is 360 million square kilometers, this translates to between 194.4 and 291.6 terawatts of heat, which although being stored will eventually be released, committing Earth to additional warming in the future.

This analogy is both broken down and reinforced by the buoyancy shown in Figure 3 and by the heat pipe in Figure 4, which moves heat from a hot source to a cold sink through the phase changes of a working fluid.

Global warming heats surface water in the tropics, but not sufficiently to produce a vapor pressure capable of moving the heat of warming into deep water. As a result, the warmed water is buoyant, and has as its only avenue of escape the poles.

A heat pipe, however, draws heat from the surface into a low-boiling-point working fluid, like ammonia, to produce a vapor pressure that moves the heat into the vacuum of a condenser where the vapor condenses and releases the heat of global warming into the cold sink of the ocean. The residual heat of warming not converted in Figure3 warms the cold water, giving it buoyancy so the warmed water resurfaces where it can be recycled.

This is the technically sound way of addressing global warming as opposed to the technologies of prevarication identified by Duncan McLaren & Nils Markusson in their paper The co-evolution of technological promises, modelling, policies and climate change targets where the authors note, “The nature and framing of climate targets in international politics has changed substantially since their early expressions in the 1980s. Here, we describe their evolution in five phases—from ‘climate stabilization’ to specific ‘temperature outcomes’— co-evolving with wider climate politics and policy, modelling methods and scenarios, and technological promises (from nuclear power to carbon removal). We argue that this co-evolution has enabled policy prevarication, leaving mitigation poorly delivered, yet the technological promises often remain buried in the models used to inform policy. We conclude with a call to recognize and break this pattern to unleash more effective and just climate policy."

The five phases of evolution and their definitions are:

The contemporary technological proposals for responding to climate change identified by  McLaren and Markusson include nuclear fusion, giant carbon sucking machines, ice-restoration using millions of wind-powered pumps, and spraying particulates in the stratosphere.

Critically, they say,  “in this process, each technological promise has  enabled  a  continued  politics  of  prevarication  and  inadequate  action  by  raising  expectations  of  more  effective  policy  options  becoming available in the future, in turn justifying existing limited and  gradualist  policy  choices  and  thus  diminishing  the  perceived  urgency  of  deploying  costly  and  unpopular,  but  better  understood  and tested, options for policy in the short term. The prevarication they identify isn’t necessarily intentional, but feeds on systemic 'moral corruption', in which current elites are enabled to pursue self-serving pathways, while passing off risk onto vulnerable people in the future and in the global South.”

The article describes a history of such promises, showing how the overarching international goal of 'avoiding dangerous climate change' has been reinterpreted and differently represented in the light of new modelling methods, scenarios and technological promises.

The targets, models and technologies have co-evolved in ways that enable delay: "Each novel promise not only competes with existing ideas but also downplays any sense of urgency, enabling the repeated deferral of political deadlines for climate action and undermining societal commitment to meaningful responses,” they say. And conclude: "Putting our hopes in yet more new technologies is unwise. Instead, cultural, social and political transformation is essential to enable widespread deployment of both behavioral and technological responses to climate change."

And  McLaren and Markusson aren’t alone in their call for more effective and just climate policy.

In the paper, Decision making in contexts of deep uncertainty – an alternative approach for long-term climate policy by Workman et al., show  that the IAMs McLaren and Markusson referenced have been developed within a very small, narrow community and can heavily distort decision-making processes. For example, large-scale Carbon Dioxide Removal (CDR) is one such distortion that is problematic for a number of reasons. Most worrying, dependence on CDR is being baked into international emissions targets without public debate, which is likely to lead to polarization as a function of the trade-offs and side-effects of large-scale CDR deployment and is likely to hinder progress on CDR and alternative mitigation strategies.

Workman says, “One of the most high profile distortions in climate policy development has been that the majority of global emissions scenarios compatible with holding global warming to less than 2°C depend on the large-scale use of BECCS of up to 15 billion tons pa – to compensate for an overshoot of atmospheric CO2 concentrations. Recent critiques have highlighted the ethical and environmental risks of this strategy – The scale of carbon removal deployment would rival the worlds’ largest industries and sectors such as Oil and Gas and Agriculture. At present less than a few thousand tonnes of carbon dioxide are removed annually.”

The authors argue “the tendency to view model outputs as objective science, capable of defining “optimal” goals and strategies for which climate policy should strive, rather than as exploratory tools within a broader policy development process. Effectively, a model-centric decision-making philosophy is highly sensitive to uncertainties in model assumptions and future trends and tends to favour solutions that perform well within a narrow-modelled framework at the expense of exploring a wide and diverse mix of strategies and values.”

And that “the need for an alternative approach that explicitly embraces uncertainty, multiple values and diversity among stakeholders and viewpoints, and in which modelling exists in an iterative exchange with policy development rather than separate from it. Such an approach would provide more relevant and robust information to near-term policy-making and enable appropriate goals for climate policy in a given context being agreed and defined by dialogue between multiple stakeholders rather than based on forecasts rather than actual results of a single community.”

In the contemporary lexicon, going 'viral' means a piece of news, image or video that has become incredibly popular on social media in a short time.

A viral solution that can be rapidly absorbed and acted on by the masses is required to address global warming but instead élites, in recent months bolstered by the virus that is wiping out their nascent competition, are crushing the environmental wants and needs of society.

The only antidote to this rout are the laws of physics dealing with heat, temperature, and their relation to energy, work, radiation, and the properties of matter.