From Paris to Lofoten and Back: A Call for a Managed Decline of the Fossil-Fuel Industry

Contact
Follow
Profile
Two events this September set a new bar for climate change leadership. First, over 340 non-governmental organisations from 67 countries signed the Lofoten Declaration. This document calls for an end to exploration and expansion of new oil, gas and coal reserves, a managed decline of the oil, coal, and gas industry, and a just transition to a safer climate future.

Second, responding to France’s reputation as a climate action leader in the wake of the Paris Agreement on climate change, President Macron’s government introduced draft legislation to stop the permitting of oil and gas drilling and to ban all production and exploration of oil and natural gas by 2040 on France’s mainland and overseas territories.

Both developments emphasize the need to restrain fossil fuel supply and to incorporate it into the climate change conversation, which crosscuts several SDGs, including 13 (Climate Action), 12 (Responsible Consumption and Production), and 7 (Affordable and Clean Energy). While climate policy discussions have historically focused on managing energy demand as a mitigation tool, there is now a growing awareness of the need to complement demand-side measures with supply-side policies—that is, climate policies that limit exploration and extraction of fossil fuels.

The Paris Agreement has set an ambitious goal of striving to limit anthropogenic climate change to 1.5°C above pre-industrial levels, while firmly committing to limit temperature increase to well below 2°C. According to the Intergovernmental Panel on Climate Change, as of 2014, nearly three-quarters of proven reserves of coal, oil, and natural gas must remain unburned if warming is to be kept below 2°C (Table 2.2, p. 64). More recent research by Oil Change International indicates that, if all of the oil, gas, and coal in currently producing and near-producing fields and mines were to be burned, we would not be likely to keep warming below 2°C.

In line with this requirement, French President Macron praised the new drilling ban in France as “an important step to fulfill our international commitments” on climate change mitigation. Although France does not have significant hydrocarbon extraction at present, its new legislation would not only put an end to its domestic debate on shale gas development, but it would also set an important precedent of a G7 country acting on the recognition that carbon pricing and other demand-side policies alone are not enough to respond to the climate challenge. As renewable energy solutions become cheaper and more accessible, the world needs to cut both demand and supply of fossil fuels.

If we are to restrain climate change, the extraction of oil, gas and coal will see a decline anyway, driven by reduced demand for fossil fuels, or their restricted supply matched with the switch to available clean energy alternatives. Governments can choose whether this decline will be managed, predictable and just in terms of jobs and economic opportunities, or unmanaged, disruptive and unjust, replicating the worst-case scenario of commodity boost and busts for poor countries.

For this reason, the Lofoten Declaration, signed by IISD among other NGOs, states that managed decline of the fossil fuel industry “should be first addressed by countries, regions, and corporate actors who are best positioned in terms of wealth and capacity to undergo an ambitious just transition away from fossil fuel production. In particular, leadership must come from countries that are high-income, have benefitted from fossil fuel extraction, and that are historically responsible for significant emissions.”

In particular, the Lofoten Declaration takes its name from the Lofoten Islands in Arctic Norway, an iconic conservation site rich in oil and thus a battlefield that environmental groups have been defending from being opened to extraction for many years. Whereas in previous years the “leave oil in the soil and under the seabed” conversation in Norway was mainly about protecting fisheries, this year’s elections were different. Several parties opposed further oil exploration in Norway on climate reasons.

As a result of the elections on 11 September 2017, the ruling Conservative Party remained in power in Norway, making it unlikely for Norway to replicate France’s policy at this stage. But the question will reemerge again, because, according to a recent survey, 44 per cent of Norwegians would be willing to leave some oil in the ground if it helped cut emissions. 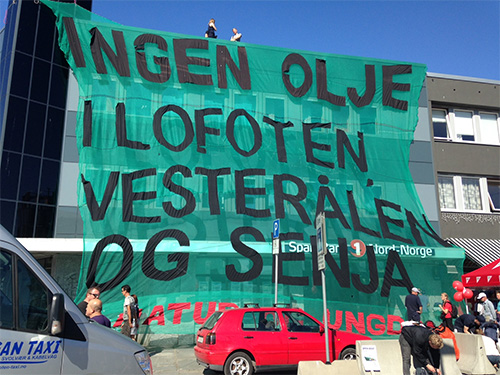 The new standard of climate leadership requested by the Lofoten Declaration and demonstrated by France also comes in other forms. For example, for over a decade, Costa Rica has implemented a moratorium on petroleum extraction while Quebec and several US states banned fracking. China, India and Indonesia all have de-facto restricted new coal mines to tackle oversupply. The Yasuni-ITT Initiative in Ecuador to forego the oil development in a biodiversity hotspot failed, but offered many lessons and a new level of discussion.

Other policies limiting fossil fuel supply include trade restrictions and the phase out of subsidies to fossil fuel production that unlock “zombie energy” that would be unviable without government support. Research by the International Institute for Sustainable Development and the Overseas Development Institute has demonstrated that a complete removal of subsidies to fossil fuel production globally would reduce the world’s emissions by 37 Gt of CO2 over 2017-2050 (roughly the amount of carbon dioxide that would result from burning all proven oil reserves in the United States and Norway).

The question of unburnable carbon is also a question of opportunity cost, because public and private money currently spent on fossil fuel exploration and extraction could instead be used to implement the SDGs. In the words of the Lofoten Declaration, “there are tremendous leadership opportunities for these countries to demonstrate that moving beyond oil, coal, and gas – both demand and production – is not only possible, but can be done while protecting workers, communities, and economies.”