Microgrids are becoming a worldwide phenomenon. Currently an estimated $4.5 billion market in the US alone with 1,459 MW online and 1,122 MW in planning or development, the microgrid market is expected to continue to grow as the world demands ever more electricity usage and the grid struggles to keep up. The truth is that the traditional grid was not built to cope with the extraordinary level and fluctuations of present-day demand, and microgrids present the perfect solution. The question (to the utilities) is whether we are ready to embrace the change and adapt.

The electricity generation system has been traditionally driven by demand, as a consequence of the high cost of storage systems. Therefore generation follows demand extremely closely, making many adjustments to keep the grid balanced. This is done with many power plants running at part load as well as reserve plants running on standby, which is inefficient. Line losses and inefficiency results in typically only 30% of generation reaching customers. Furthermore increased demand over time plus complexity of the grid coupled with the increased use of intermittent renewable generation such as wind and solar puts a strain on the system. PV systems installed on roofs are generally not compatible with the traditional grid system.

There has been a change occurring in the grid distribution system with smaller customers. These resources are historically not grid aware – microgrids are a way of managing complexity and transform business environment. There are a great many components that can make up a microgrid system, from smart buildings, to PV and micro-turbines and combined heat and power (CHP), energy storage (batteries and fuel cells), and electric vehicles. 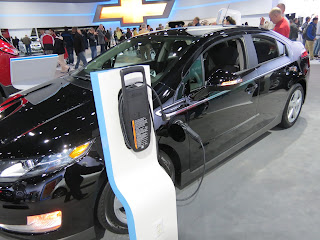 The Pecan Street demonstration project in Austin, Texas, aims to test how effective demand response with EVs can be. Most of the residents of this small community own Chevy Volts, and it has already been noticed in preliminary monitoring that most owners plug in the EV for charging when they return home from work, putting a strain on the grid. GM’s demand response program looks into controlling this flow of electricity, by decreasing the amount of electricity that enters the vehicles as necessary – for example, on a hot evening when the electricity is in high demand for air-conditioning.

However, there is some degree of confusion over how to engage in microgrids outside of single-owner properties, for example, schools, hospitals and military bases, to which they are currently limited. Who owns the electricity? Is it the grid, or each individual owner? There are technical as well as legal aspects to this issue, and as microgrids become increasingly commonplace and necessary, these questions will need answering.

The other key issue is how utilities will cope with this change. At the moment the answer is overwhelmingly nothing- yet, anyway. These corporations seem undecided about this new development, even seeing microgrids as a threat to their industry, as these systems could potentially bypass the grid by generating their own electricity and reduce their reliance on these giants. In most of Europe this is not a problem, as most utilities are state owned. Renewable generation and demand response are all ways of reducing carbon emissions and so for the governments who have an obligation to reduce emissions, microgrids would be a welcome development. A few utilities have begun to adapt, although they are in the definite minority. Sempra, Duke, PGE, SMUD, Integrys are all embracing the change and finding ways to profit from this. Other utilities will have to be quick to follow, as microgrids are now just getting off the ground, and are definitely here to stay.

Micro Grids do offer advantages when it comes to grid supply stability R&D and new energy production  performance and stability analysis.. They also offer the same measure of protection to International grid structures as in the North American Grid; and some European Grid systems; when employed as a hybrid compartmentalized macro grid composed of many micro smart grid structures; cascade grid failure and large areas of black outs may be mitigated.