The paper Global reconstruction of historical ocean heat storage and transport by a team of British and American scientists estimates that since 1871 the excess heat that has accumulated in the oceans as a result of rising greenhouse gas concentrations in the atmosphere is 436*1021 ± 91 Joules.

The Guardian calculated this is the equivalent of one atomic bomb explosion per second for the past 150 years.

Converted to terawatts (TW), which is the standard measure of primary energy consumed annually, this is 92 TW, whereas we consume annually around 17.7 TW of power from all sources.

Another way of looking at this problem would be to consider the value of one atomic bomb’s worth of energy every second.

The Union of Concerned Scientists estimates the cost of a single nuclear weapon at $20 million, so, the annual cost of producing this amount of energy with atomic bombs would be $631 trillion.

Substituting 1-gigawatt nuclear plants at a cost of $5 billion a piece instead of bombs, the value of this much energy would be roughly $460 trillion a year. (The cost of each plant would be amortized over at least 30 years, but the study says the oceans have been accumulating this energy 5 times that long).

The UN estimates that the current world population of 7.6 billion people will reach 9.8 billion by 2050 so without increasing the demand for energy per person the world will need 29 TW of power, which is at least triple the amount of energy that has gone into the oceans each of the last 150 years.

In nuclear plant equivalents, this would be $153 trillion a year.

As the Guardian points out, this energy drives sea-level rise and enables hurricanes and typhoons to become more intense among the other 100 top environmental impacts that are costing between $4.7 trillion and $6.6 trillion annually. And the problem is escalating as evidenced by the fact that over the period 1990 to 2015 the heating rate has reached three Hiroshima bombs per second, whereas another scientist not involved in the study estimates the current warming rate is as high as six bombs per second.

As the researchers point out, “understanding ocean heat change and the role of circulation in shaping the patterns of warming remain key to predicting global and regional climate change and sea-level rise.” But understanding something and taking advantage of that knowledge are two different things.

For example, another study this week, The Little Ice Age and 20th-century deep Pacific cooling, by Woods Hole and Harvard researchers suggests that the Little Ice Age, about 700 years ago produced cooling on the surface that, owing to how the ocean circulates, is recorded in Pacific deep-ocean temperatures today.

The following graphic shows the sites of deep-water formation across the planet where surface currents sink to the bottom of the ocean and gradually migrate around the globe. 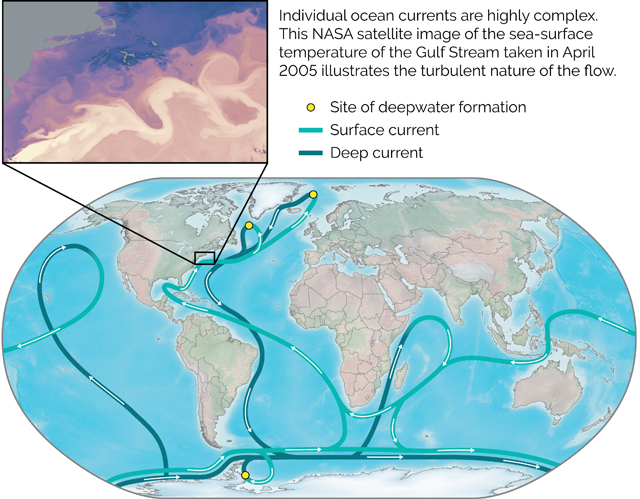 During the Little Ice Age 1300 to 1850, the average difference between the ocean-surface temperature was .4 degrees C cooler than the Medieval Warm Period per the following graphic. 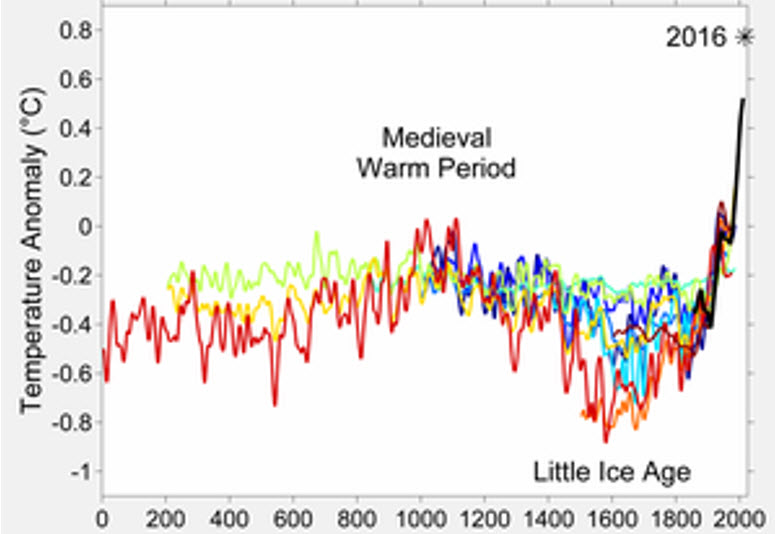 Gebbie and Huybers compared data taken during the 1870s by scientists on the HMS Challenger to show that most of the world’s oceans have been warming up over the last century, but in the deep Pacific Ocean, around 2 kilometers deep temperatures are still dropping and offset one-fourth of the total global heat gain in the upper ocean.

If a quarter of the heat of warming can be offset by moving cooler water into deep water at the sites of deep water formation, all of it can be moved to depths of 1000 meters in the Pacific, the Atlantic and the Indian Oceans through heat pipes and heat engines that convert about 7% of the heat to the energy the planet desperately needs.

At these depths, this heat drives half as much sea-level rise and zero hurricanes and typhoons.

Just as the Little Ice Age cooled the planet by as much as .8C the current .8C warming can be offset by Heat Pipe OTEC in the service of 29 TW of primary energy for the next 3,250 years, which is the time required to recycle the heat back and forth between the surface 13 times.

And per the following bill of materials this energy can be had for less than the equivalent cost of nuclear power. 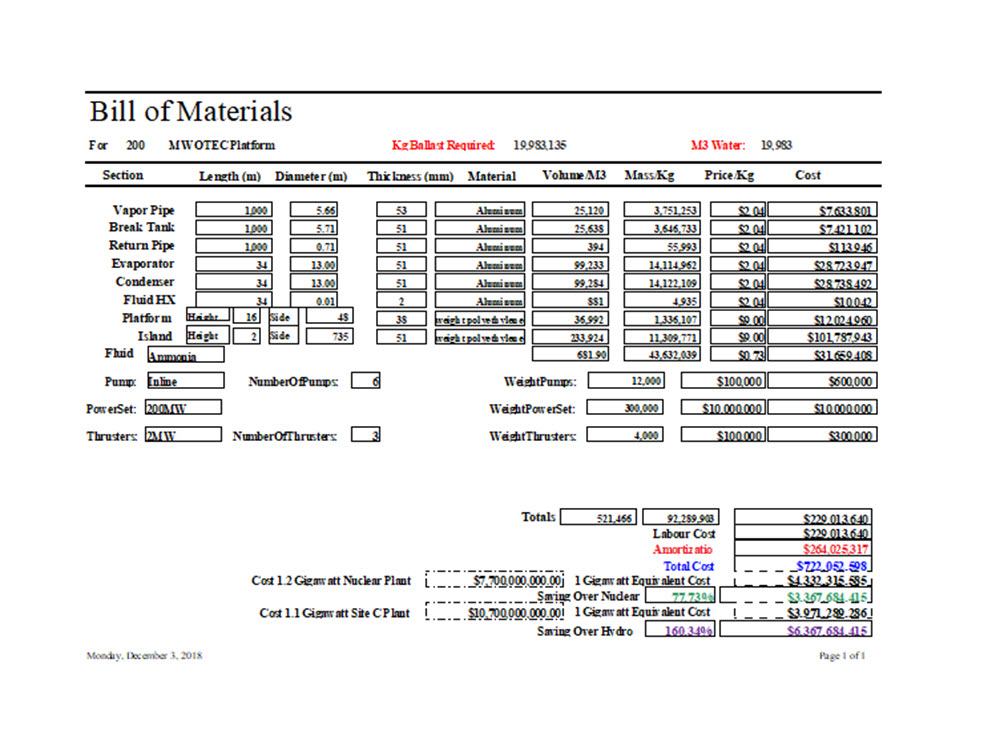 2019: The year of the personalized utility

2019 DERs Continue Their Rapid Penetration on our Distribution Networks

Utilities are learning to act faster to squeeze out business value

Insights for the Joint Use Sector in 2019

2019 Will be Memorable for US Utilities. Here are 5 Reasons Why.