Oil Production Changes By President From 1961-2020

Over the past 60 years, U.S. oil production has seen its ups and downs. From the decline that began in 1970 through the fracking boom of the 2000s, U.S. presidents have overseen a wide range of oil production changes.

As I have explained previously, a president often benefits from the actions of his predecessor. For example, President Carter benefitted from President Nixon’s decision to approve the Alaska Pipeline, and Presidents Obama and Trump benefitted from the pro-fracking regulations of the President George W. Bush administration.

Thus, this article shouldn’t be seen as crediting particular presidents for the oil production that took place while they were in office. Generally, those trends were set into motion years earlier.

With that in mind, below I present the change in oil production during each presidential term since 1960. For presidents that served two terms, I broke it into two parts. Nixon’s term consists of about 5.5 years, and due to Nixon’s resignation Gerald Ford’s term was about 2.5 years.

Here are the terms I considered in the graphic:

The following graphic shows the change in U.S. oil production in million barrels per day (BPD) since JFK’s inauguration. I used the average production rate during each term, and then compared to the average of the next president’s term. JFK’s production numbers are compared to President Dwight D. Eisenhower’s (which are not shown).

The source for this data is the Energy Information Administration, and the crude oil numbers do not include lease condensate (which has also surged since 2005). A second term is denoted by “2” (e.g., “LBJ2”). 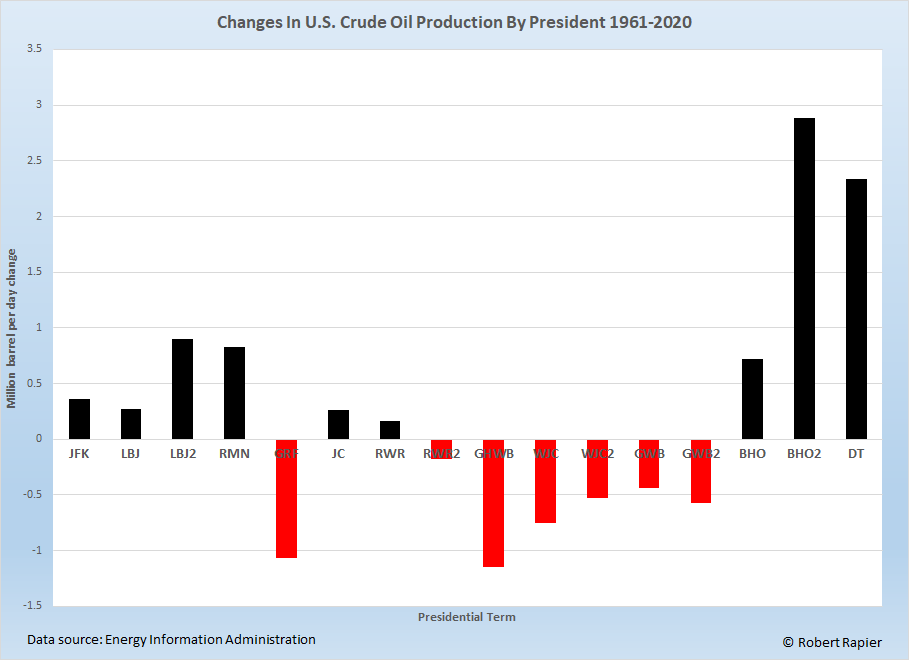 Until 1970, U.S. oil production was on the rise. During Richard Nixon’s second term, oil production began to fall. The largest share of the decline — more than 1 million BPD — happened during President Ford’s abbreviated term.

But then production rose during the Carter Administration, primarily because of President Nixon’s decision to expedite the Alaska Pipeline. That surge couldn’t arrest the decline for long, and following some brief gains that extended in President Reagan’s first term, the U.S. began a long — and many believed terminal — production decline.

The production gains during President Trump’s term would have rivaled those in Obama’s second term if not for the Covid-19 pandemic that crashed the oil markets.

However, if you look at the entire history of U.S. oil production, President Trump did preside over the highest oil production in U.S. history.

But the reason for the surge that started during Obama’s first term was the fracking boom that started while President Bush was in office. The Bush Administration passed many laws to spur the fracking industry, but the production gains wouldn’t arrive until he was out of office. Hence, President Obama and then President Trump would preside over those gains.

That is the way it goes with oil production. The president getting the credit or blame is usually at the mercy of policies and decisions that were made years earlier. President Bush certainly helped the fracking boom along, and without that boom it is unlikely that President Obama and President Trump would have seen those huge production gains.