Ocean Heat and Carbon Drains to Cool and Energize the Planet.

A team of climate researchers lead by David Keller of the GEOMAR Helmholtz Centre for Ocean Research Kiel and 12 other institutions investigated negative emission technologies with regard to their economic and social potential per the following graphic by Rita Erven of GEOMAR. 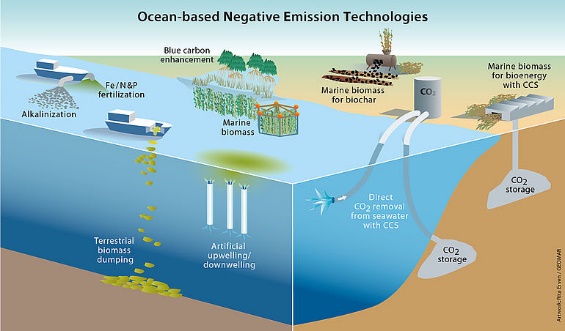 In their 2014 paper Potential climate engineering effectiveness and side effects during a high carbon dioxide-emission  they compared the effectiveness and side effects of afforestation, artificial ocean upwelling, ocean iron fertilization, ocean alkalinization and solar radiation management during a high carbon dioxide-emission scenario. And determined that even when applied continuously and at a scale currently deemed possible, all the methods studied were either relatively ineffective with limited (<8%) warming reductions or have potentially severe side effects that cannot be stopped without causing rapid climate change.

“The potential for these types of climate engineering to make up for failed mitigation may be very limited,” they said.

Although their paper and graphic mentioned “downwelling”, it was only in relation to volume conservation, whereby upwelling waters require replacement from waters downwelled from someplace else.

The late, Dr. Alan K. Miller, former research Professor at Stanford, Senior Staff Engineer at Lockheed Martin and founder of “Cool it, Earth” however determined that cold water upwelling from a stable 7 terawatt (TW) Ocean Thermal Energy Conversion (OTEC) source could directly decrease the Earth’s Surface Air Temperature (SAT) by 1.1°C, which would be equivalent to taking 2,261gigatonnes of carbon dioxide out of the atmosphere.

The Keller group used the example of 1 cm/day upwelling over most of the world’s oceans to produce a total upwelling rate of 2.64E+07 m^3/sec. Whereas Dr. Miller showed that 7 TWs (TW) of OTEC distributed over the tropical oceans would produce a total of 2.28E+07 m^3/sec of upwelling at a similar 1 cm/day. But 1.1°C of cooling produced by upwelling is far more than the 8% overall cooling that Keller estimated for his basket of technologies.

Upwelling would be accomplished by the Lockheed Martin team of which Dr. Miller was a part, with the aid of 80,300, 100-megawatt plants, using 10-meter wide, 1,000 meter long, cold water pipes (CWP) like the one depicted below, which would produce 7 TW of power. 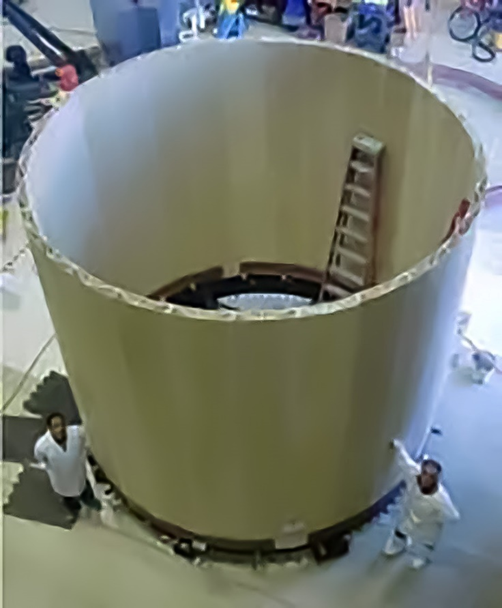 Storms like the 2015 Super Typhoon Maysak, a Category 5 typhoon, which on April 1 had an eye about 40 kilometers wide (below), also decrease SAT. 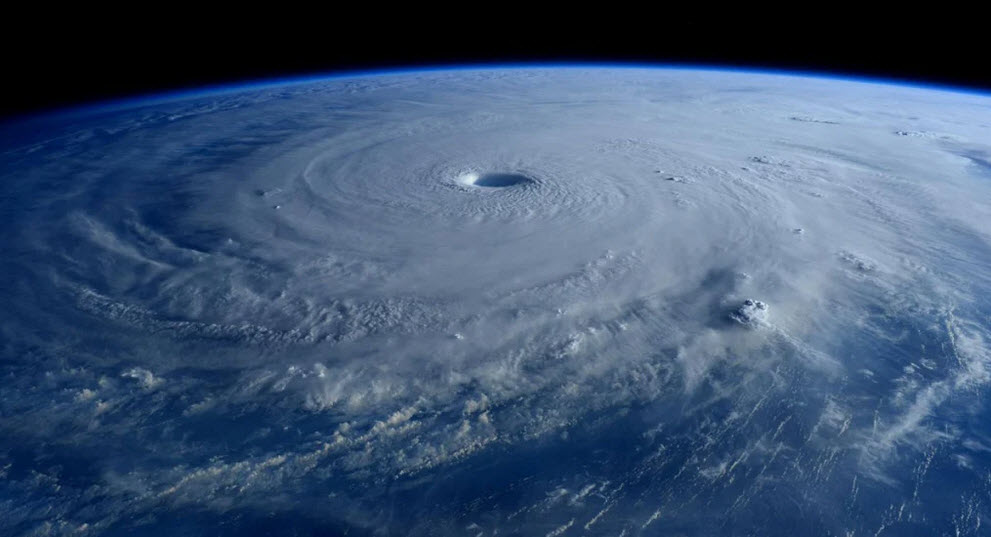 Which is not unique, considering Hurricanes Katrina and Rita cooled the Gulf of Mexico by 2oC in total and by 4oC in some areas for a month per the following graphic. 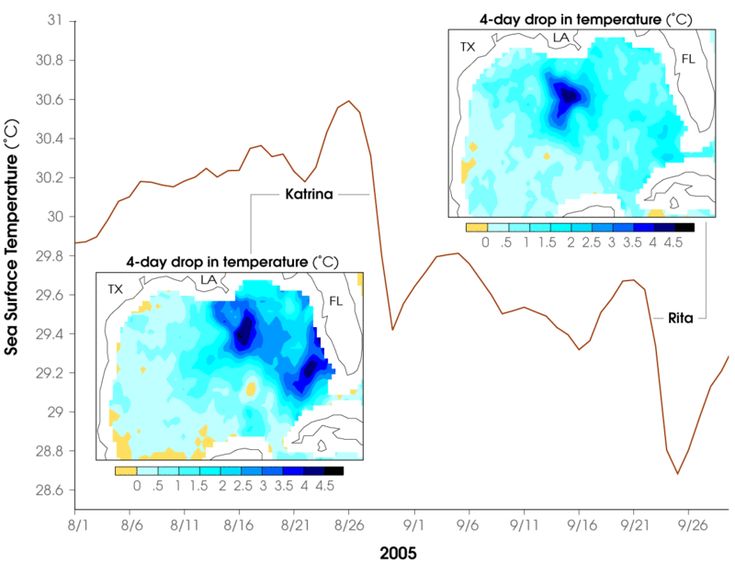 But upwelling of water, either with CWPs or hurricanes is fraught with problems.

Hurricanes like the schematic below are typically 200 to 500 kilometers wide, but can reach 1,000 kilometers, and typically have eyes of between 30–65 kilometers diameter.

Both their eyes and the OTEC CWP induce upwelling that distributes surface heat over a wide area. Which is detrimental to the climate because they accelerate heat movement away from the tropics towards the poles, which are warming 4 times faster than the rest of the planet.

They act like firehoses, when drains that keep the heat of warming within the tropics are required.

This impediment was demonstrated by the paper An Assessment of Global Ocean Thermal Energy Conversion Resources With a High-Resolution Ocean General Circulation Model by Rajagopalan and Nihous of the University of Hawaii per the following graphic, which shows that in 1,000 years, at an OTEC intensity of 30 TW, the tropics would be cooled by 4oC at the expense of an equivalent warming of the Arctic and the fishing grounds on the west side and tip of South America. 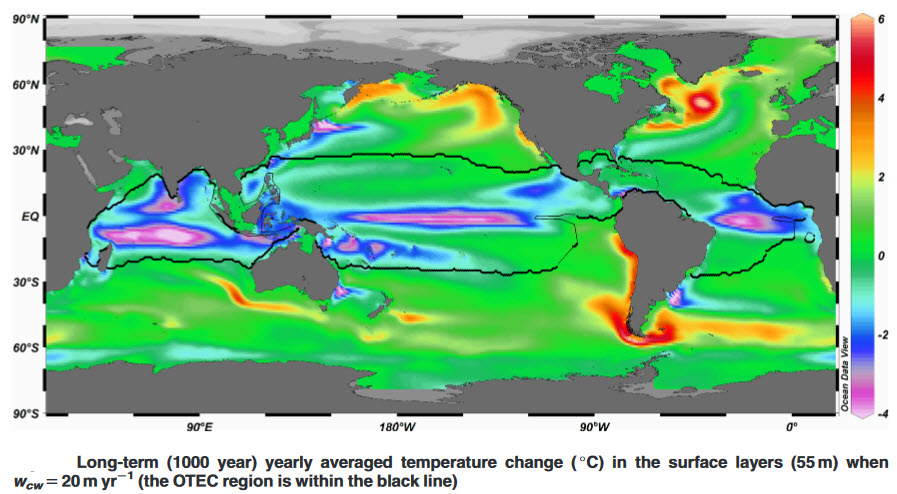 Although Dr. Miller relied on Rajagopalan and Nihous’ 2013 estimate of 7 TW as the maximum steady state OTEC potential, in 2017 the University of Hawaii’s International Pacific Research Center, recalculated and upgraded this potential to between 8 and 10.2 TWs.

In a 2018 paper, A Preliminary Investigation of the Effect of Ocean Thermal Energy Conversion (OTEC) Effluent Discharge Options on Global OTEC Resources,  Nihous then acknowledged, “the option of locating the OTEC condenser and the cold seawater ducting at depth has been proposed for some time, to eliminate the need for a large and costly pipe extending from the cold seawater withdrawal depth to the surface.” And added, “Although detailed designs are lacking for such a concept, with serious engineering challenges of its own, implementing OTEC with a deep condenser certainly would require the cold effluent discharge to be treated separately.”

At the time of his death in 2018, Dr. Miller, along with this writer and others, were examining the engineering challenges of the deep-water-condenser (DWC) design. Which as Dr. Miller offered, “do not appear to have any show-stoppers among them”.

With new partners, the work initiated by Dr. Miller is continuing.

Contrary to Nihous, there is no cold-water effluent discharge with the DWC design.

Both hot and cold water only flow laterally through the heat exchangers.

The GEOMAR graphic above shows upwelling causing phytoplankton blooms as a way of removing carbon dioxide from the atmosphere. But these blooms can be toxic. Especially for consumers of bivalves and for island and shoreline residents adjacent to where the phytoplankton blooms occur. Which is why the requisite for UO is cold effluent must be deposited between 70 and 100 meters beneath the surface. Which results in a dilution of the SAT benefit of UO. Or at least delays that benefit because the diffusion rate of heat in the mixed layer of the ocean is 1 meter/day compared to the 1.4 cm/day measured by the Keller group.

It takes about 3 months therefore for any heat moved by either UO or into deeper water by hurricanes to return to the surface, which negates any carbon reduction phytoplankton benefit or long-term cooling benefit from either upwelling or hurricanes.

But this cooling is afforded by the Thermodynamic Geoengineering – DWC - design that sequesters heat for at least 226 years. And is 2.5 times more efficient than upwelling because of the proximity of both hot and cold water to the heat exchangers. Plus, the fact a 1,000-meter-long column of the working fluid gas gains 5oC at the bottom of column due to the influence of gravity.  Which means the steady state OTEC potential is actually 31 TW as shown below.

Furthermore, instead of having a global warming hiatus of only 3 months occasioned by the movement of warming heat to a depth of 100 meters, this hiatus would be extended to 226 years by the movement of heat into deep water and then 12 more times when the heat is diffused back to the surface and is recycled.

The greatest benefit of the deep-water-condenser (DWC) design however is cost reduction facilitated by the miniaturization of the piping infrastructure and the paring down of the Energy Island platform to its bare bones so that it produces only OTEC power and only enough ancillary power from wind, wave and solar to move water through the plant’s heat exchangers and to relocate the plants to where the surface ocean temperatures are highest.

The two graphics below show comparison between a 40-kilometer (40,000 meter) hurricane eye and a 31.5-meter diameter cold water OTEC pipe (CWP), which is the diameter required to produce 1-gigawatt of power, on the left. And on the right is the difference between a 1- gigawatt CWP and the 3.6-meter diameter deep-water heat pipe. 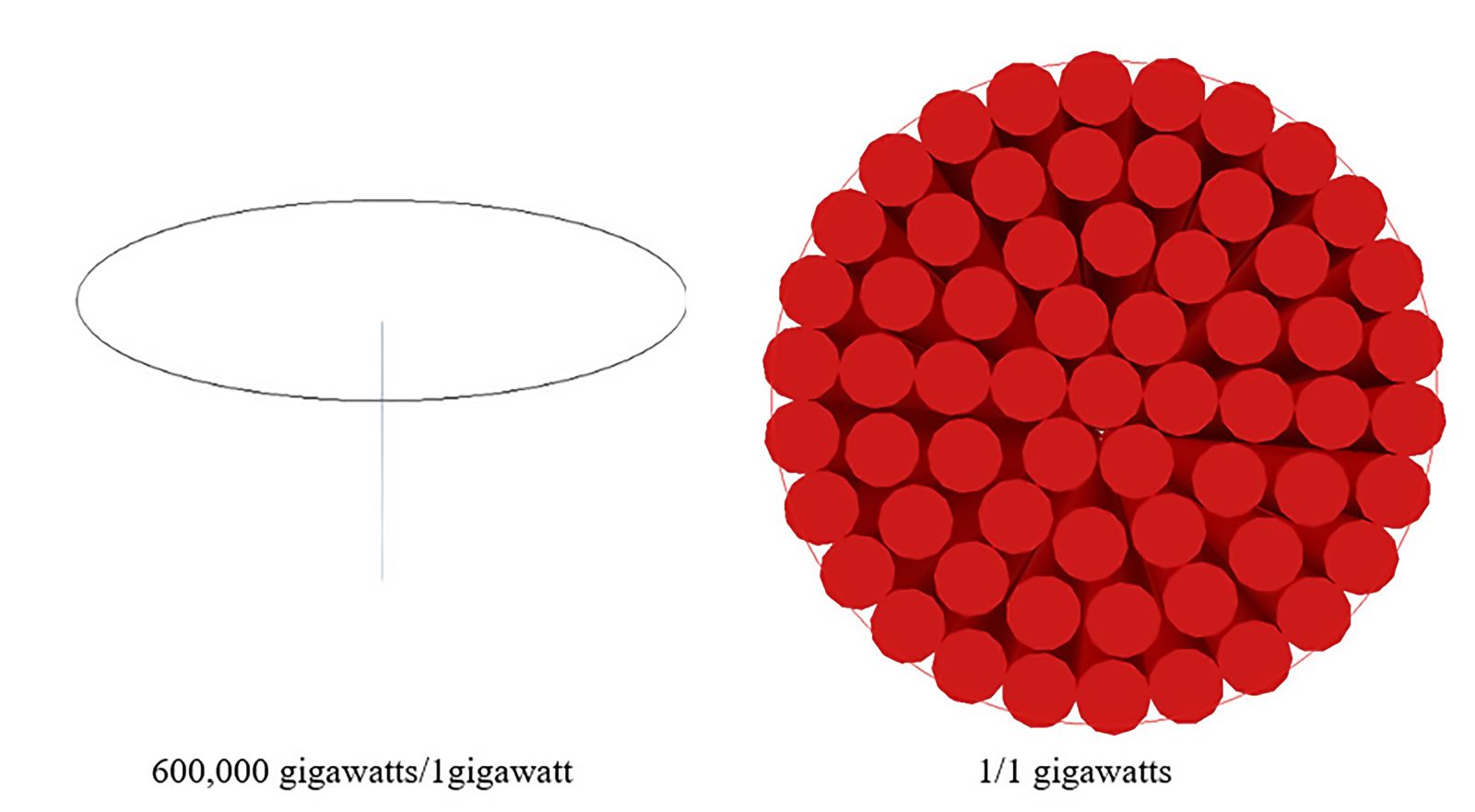 Approximately 77 heat pipes will fit into 1 one CWP, both of which would produce 1-gigawatt of power, which permits an obvious materials and cost reduction.

The following is a schematic of a 1-gigawatt DWC (Thermodynamic Geoengineering) platform consisting of an evaporator, a heat pipe, and a condenser. Which moves heat from the surface through the heat pipe at a speed approaching that of sound to a depth of 1,000 meters (the red arrow) and at an environmentally acceptable capacity of 31,000 1-gigawatts plants would remove about 4.3 gigatonnes of carbon dioxide (black arrows) from the atmosphere every year. 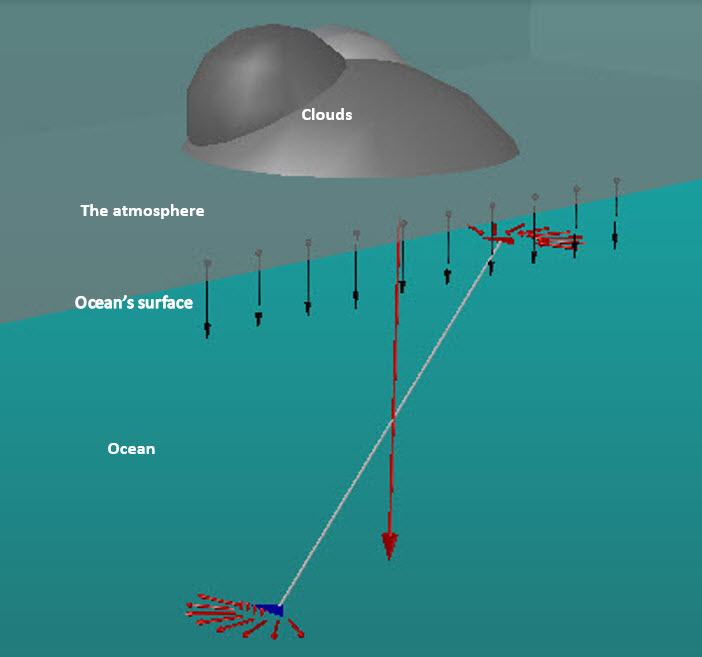 The heat pipe is essentially a heat drain from the surface, which in turn acts as a drain for carbon from the atmosphere as well.

Below are close ups of the evaporator (red) and the condenser (blue) showing how heat moves into and out of both heat exchangers, as well the turbine (black} that converts the working fluid vapor into electrical energy, the pump (silver) that returns the condensed working fluid vapor back to the surface and the up arrows in (red) that represent the diffusion of heat up from the deep at a return rate of about 4 meters/year.

The thermohaline circulation, the global conveyor built, important to the rate of sea ice formation near the poles, which in turn affects other aspects of the climate system like albedo, on the other hand circulates only 15 Sv.

The consequence of shifting this kind of volumes of water is the dilution of the OTEC resource, but upwelled water also pushes surface heat out of the OTEC zone towards the poles where it becomes an environmental hazard. And heat shifted beyond the limits of the OTEC zone is no longer capable of producing energy and becomes anergy.

This .8 W/m2 of cooling would compensate for the loss of the 1.08°C of cooling Keller estimated per the following graphic from that paper. 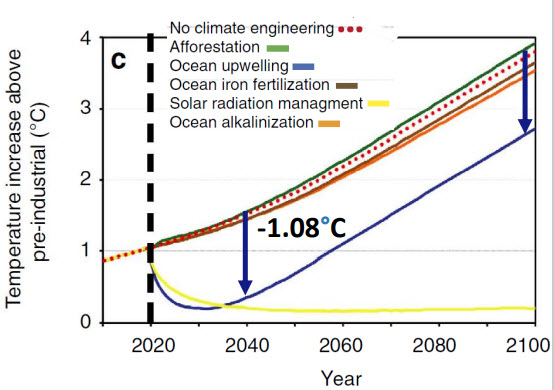 Instead of a temporary cooling of 1.08°C that would not keep us below 2°C by 2100, Thermodynamic Geoengineering requires 33 years of buildup to full capacity. After which all the heat of warming would be removed from the surface over the subsequent 226 years and would be recycled subsequently until all of heat of warming had been dissipated into space.

And whereas the Cool it, Earth! Group calculated the levelized cost of electricity, including capital, operating/maintenance cost for UO at about $0.11/kWh, the same as for wind, wave and solar, the costed bill of materials for Thermodynamic Geoengineering is about one order less at about $0.088/kWh as shown here.

For economic and social potential Thermodynamic Geoengineering is unsurpassed. And instead of having severe side effects, it has no showstoppers and there is no conceivable reason why anyone would want to stop producing all the energy 10 billion people need to live energy secure lives, while mitigating every consequence of global warming?