Ross Holden is a management consultant with over two decades’ experience in Indigenous policy and community relations in the public, private and not-for-profit sectors. Ross has served as the...

Infrastructure investments will be an essential component of stimulating a post-Covid economic recovery, and many governments see the opportunity to use those investments to simultaneously achieve other policy objectives, including reducing greenhouse gas emissions. And while shovel-ready renewable energy projects are prominent, as the International Energy Agency’s (IEA) Executive Director, Dr. Faith Birol, stated at the May 2019 10th Clean Energy Ministerial in Vancouver: “Without an important contribution from nuclear power, the global energy transition will be that much harder.” Unfortunately, even with the confluence of climate change mitigation, economic recovery and recent technological breakthroughs, governments are reluctant to take the steps necessary to remove obstacles to investment in nuclear energy. Failure to overcome these obstacles will place advanced economies at serious risk of not meeting their CO2 emissions reductions targets.

There is no doubt that renewables (including hydropower) will feature prominently in the transition to a less carbon-intensive and more sustainable energy system. According the IEA, renewables accounted for 26% of total global electricity capacity in 2018, and is set to expand by 50% between 2019 and 2024, led by solar PV (60% of expected growth), onshore wind (25%), hydro (10%) and offshore wind and bioenergy (@4% each). But because the vast majority of renewable energy is produced by hydropower, even the most optimistic of solar and wind capacity projections in the coming decade mean that renewables as a whole could account for, at most, 49% of power generation by 2030.

Nuclear is the second-largest low-carbon power source in the world today, after hydropower, accounting for a reduction of over 60 billion tons of CO2 emissions in the past five decades. But reluctance on the part of governments to invest in lifetime extensions of existing nuclear power plants, or build new plants, could result in an additional 4 billion tons of CO2 released into the atmosphere in the next decade unless low-carbon energy sources make up the difference, instead of coal or natural gas. Despite an increase of 580 gigawatts of wind and solar PV capacity in advanced economies in the past 20 years, nearly five times that amount would need to be added over the next 20 years, at a cost of $1.6 trillion, to make up for the looming shortfall in nuclear – a goal even beyond that of the IEA’s Sustainable Development Scenario. The IEA admits that such a “drastic” increase in renewable power generation “would create serious challenges in integrating the new sources into the broader energy system,” not the least of which would be the impact on consumers through higher electricity bills.

There is thus a risk that any attempt to scale up renewables on such a massive and unsustainable scale will come at the expense of investments in maintaining existing low-carbon base load nuclear energy, and in next generation nuclear (GenIV) technologies, such as Small Modular Reactors (SMRs), leading to energy insecurity, higher costs, and increased CO2 emissions. Simply put, without increased investments in nuclear power it will be extremely difficult (if not impossible), and certainly very expensive, for the world to meet its CO2 emissions reduction targets by 2050 with renewables alone.

So how well is nuclear positioned to make its important contribution? Partly driven by the need for cost-effective low carbon technology and partly as a result of technological breakthroughs (most notably in SMRs), nuclear power is seen by many as being on the cusp of a renaissance. What then are the obstacles? The IEA points to a number:

And there are others, notably historic, adverse, public perceptions of nuclear power, often supported by a lack of knowledge of, and trust in, science and fueled by disinformation campaigns.

If the advanced economies are to meet their CO2 emissions reduction targets by 2050, it will be imperative that policy makers address these obstacles to investment in low-carbon nuclear energy on an urgent basis.

But reluctance on the part of governments to invest in lifetime extensions of existing nuclear power plants, or build new plants

Much of the hesitation also seems to come with concerns about project costs-- do you think advances into techs like SMRs will provide a boost and open the door to a wider swath of nuclear projects?

Ross, quoting capacity figures for renewables is misleading. In terms of actual generation - what they actually deliver - renewables make up less than 2% of global primary energy (EIA, 2017). The tiny yellow band below represents the contribution of all solar and wind generation on Earth; the tiny green band above it, all hydropower. 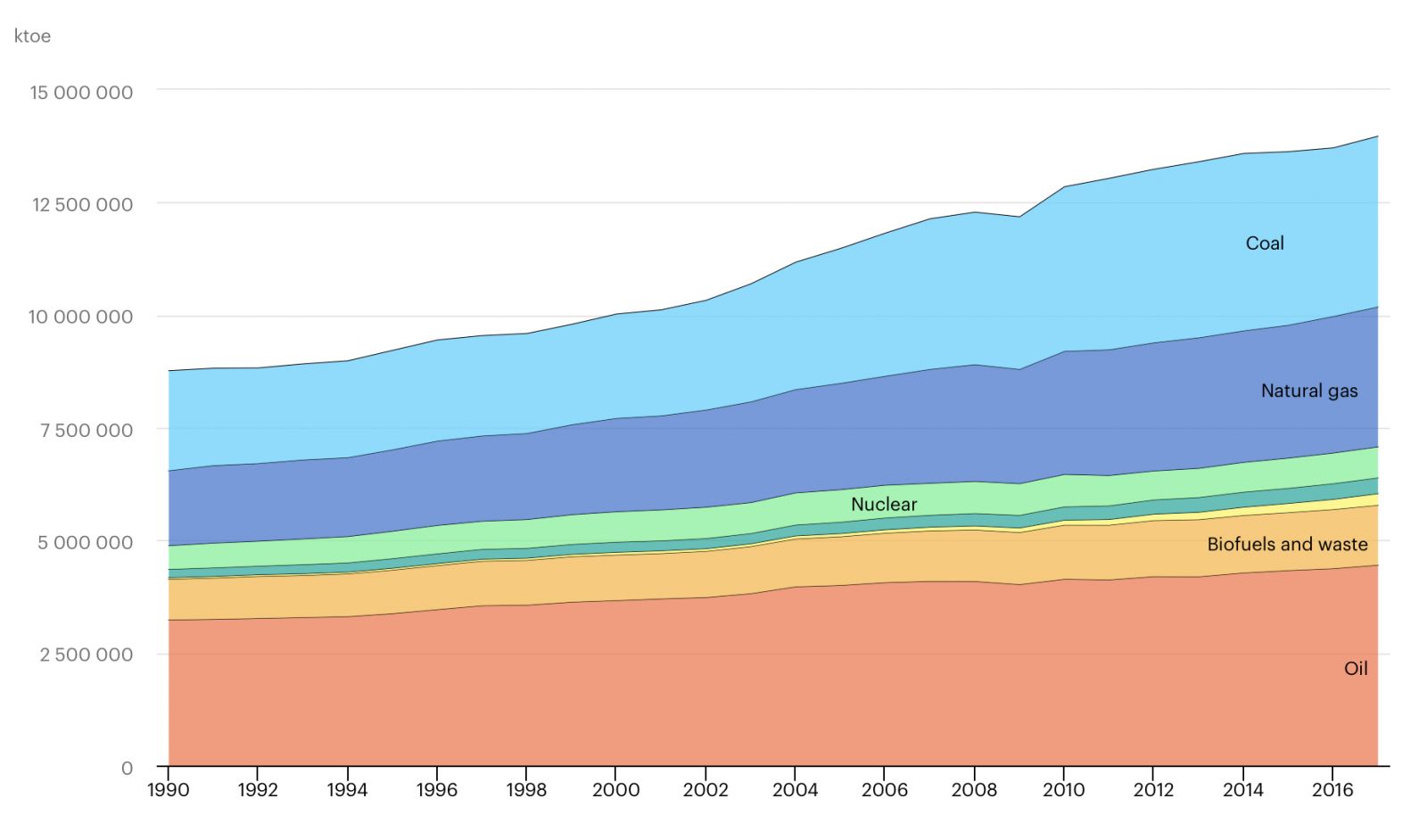 That IPCC predicts we must replace the entire graph with carbon-free energy by 2100, to limit global temperature to +2ªC, only underscores your conclusion:

"It will be imperative that policy makers address these obstacles to investment in low-carbon nuclear energy on an urgent basis."

Bob has the FACTS. We have lots of clean renewable choices. Nuclear would never exist without subsidies, it's the most expensive and dangerous power ever created, We still haven't taken care of the deadly waste and 90% of the uranium comes from Russia.

With new advanced battery storage and more efficient appliances from LED lights to high SEER 20+ Heat pumps all homes and businesses could reduce their power needs by over 50%. Let be smarter and invest in a smarter and cleaner world.