At the World Nuclear Fuel Conference (WNFC) conference in Toronto this month, I will be presenting a paper “Nuclear Power Economics and Project Structuring – 2017 Edition” to introduce the most recent version of this World Nuclear Association (WNA) report. For full disclosure, I am the chair of the WNA Economics Working Group and this is the group responsible for the report’s preparation.

The report sets out to highlight that new nuclear build is justified in many countries on the strength of today’s economic criteria, to identify the key risks associated with a nuclear power project and how these may be managed to support a business case for nuclear investment and, of major importance, to promote a better understanding of these complex topics and encourage subsequent wider discussion. 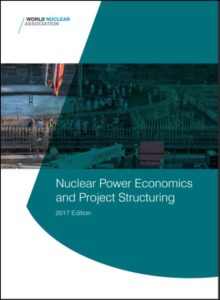 When it comes to the conclusion, little has changed since the first report was issued back in 2005. At that time, it concluded “In most industrialized countries today new nuclear power plants offer the most economical way to generate base-load electricity – even without consideration of the geopolitical and environmental advantages that nuclear energy confers.” The 2017 version comes to the same conclusion stating, “Nuclear power is an economic source of electricity generation, combining the advantages of security, reliability, virtually zero greenhouse gas emissions and cost competitiveness.”

Of course, while some will say this is no surprise given the report is prepared by the nuclear industry; it must also be noted that it is not based on any industry funded research – but rather it is based on high-quality mostly-government reports on the economics of various energy options such as the “Projected Costs of Electricity” issued by the IEA and the NEA.

While the conclusions may not have changed in the last decade, the nuclear world certainly has. Who would have guessed back in 2005 that the Koreans would have won a bid to build the first nuclear power plants in the UAE and that the first of these units would now be nearing completion while the first EPR in Finland continues to be delayed? There was the accident at Fukushima in Japan in 2011, major financial issues at the traditional large nuclear power companies such as Areva of France and Westinghouse of the USA; all while the companies from Russia, China and Korea have grown both domestically and with exports. Projects in the East are being built to cost and schedule with their outcomes being predictable due to the large programs underway in places like China and Korea using largely standardized designs. On the other hand, first of a kind projects in Europe and the USA are experiencing significant challenges. With new build being a function of capital cost and schedule, clearly poor construction performance will have an impact on the economics. The global industry is now also contemplating a new generation of Small Modular Reactors (SMRs) intended to reduce both project cost and risk.

And what about the competition? There has been huge global growth in renewables strongly supported with government subsidies and a dramatic drop in the price of gas in North America. The impacts of these subsidised intermittent renewables and ‘un-carbon costed’ gas have depressed wholesale prices in deregulated electricity markets creating a number of issues in maintaining existing large scale nuclear baseload generation (as well as other baseload options). Policymakers are finally seeing the negative impact of these issues and are just starting to address these fundamental market design problems.

Yet in spite of all of these massive changes in the market, the reality remains that:

While there are a host of issues affecting the future of nuclear power that are far from easy to address, the fundamentals remain. Overall, new nuclear plants can generate electricity at predictable, low and stable costs for 60 years of operating life and in all likelihood even longer in the future. Investment in nuclear should therefore be an attractive option for countries which require significant baseload amounts of low cost power over the long term.

As far as I can see, nuclear in “the West” is facing major obstacles:
– The risk of sudden political decisions, as when Germany should go green.
– Endless demands for new and fictitious more safety.
– Too many new designs in order to satisfy special demands.

In countries with more or less government involvement, such as Korea, Russia and China:
There it has been possible to go forward and get things done instead of endless complains from The Greens and followers.
Without being against the “Western System”, I ask:
Are we suffering from bad consequences of our system with free speech and free market?
I have tried to collect some information on http://wp.me/p1RKWc-11D

Milton, in general – regulation of O&M has come uncoupled from regulation of D&C (design/construction). Not long ago, utilities were required to charge customers rates which are “in the public interest” – what most would recognize as a necessity, given their monopoly status. But since the 2006 repeal of the Public Utility Holding Company Act of 1935 (PUHCA), that’s become a quaint anachronism. Nationwide, electricity rates are up 40% over the last decade.

It’s amazing they’re not higher. With utilities no longer subject to restrictions on campaign contributions/lobbying, they’re now firmly in control of the public utility commissions which are supposed to regulate them, and are able to charge customers whatever the hell they want.

PUHCA’s repeal has also removed annual SEC review of utility finances. Thus, multi-tiered holding company arrangements with blatant conflicts of interest, outlawed since the 1930s, are back in vogue. Utilities are once again permitted to “sell themselves” the fuel they need to generate electricity (usually, natural gas) then bill ratepayers for that, too. Quite literally – the more natural gas they burn, the more money they make, because customers are billed for every cubic foot.

Quite a scam they’ve got going.

The fossil fuel industry is not objecting to this paradigm, because it results in many, many $billions in annual revenue from sales of natural gas.

Meanwhile, regulation of nuclear D&C is more strict than ever, with promises of reform like a train which never arrives. One might almost think the fossil fuel industry was working to derail that train too – and given the reluctance of contributors to this board like David Hone of Royal Dutch Shell to even acknowledge nuclear, one might be right.

One of the basic economic problems for nuclear, is the inevitable evolution towards a grid in which base-load is an anachronism.

Especially since a 2017 decision to invest in new nuclear implies that the first electricity generated by that new nuclear will come in ~2030. So the new NPP will start to compete at the market price level of 2030, which is predicted to be lower than present prices.

And the new NPP is expected to last 60yrs, so it has to compete until 2090. A tough case. E..g. Agora study showed that unsubsidized PV-solar price level in 2050 will be 2 – 3cnt/KWh in insolation poor Germany. For wind similar.

Note that PV-solar 2.5cnt/KWh price level is already reached in sunny areas such as Abu Dhabi. And that recently Dong offered to install and operate offshore wind in the North Sea for German whole sale prices, being less than 3cnt/KWh on av.
(Wind turbines of ~12MW, CF’s >55%).

Btw.
Thank you for the insightfull report.
Would be interesting to see the slides used at the conference.

Bas, baseload electricity is an anachronism exactly nowhere in the world.

Like a renewables-sufficient grid, the “inevitable evolution” away from it is a product of your imagination, powered by deep-rooted and irrational fears.

It’s powered by his paymasters.  A true believer wouldn’t go to such great lengths to conceal his sources using e.g. link shorteners; only someone consciously trying to deceive would do that.  In other words, a professional propagandist.

As announced today Toshiba is dissolving, …

Did you intend to say dissolving, i.e. to cease to exist? The Nikkei source you provide indicates otherwise, that the company is splitting up businesses out from under the same roof.

By the time a nuclear plant could be approved and constructed in the USA ANYWHERE, the cost of renewables PLUS storage will be 20 to 50% lower than nuclear

Perhaps in 14 years someone will devise a solar plant which operates at night.

It is very difficult to compete with a power source which receives fixed payments irrespective of the value of the power produced.
More and More of the intermittent power in places which subsidize it heavily is produced at times when electricity demand is lower than electricity supply at a zero price.

Storage will be available in less than 14 years at a cost less than $50 per MW to utilities, INCLUDING the panels. The only cheaper source will be wind or hydro and possibly as soon as 2025.

In the US there is no possibility that newly built traditional nuclear plants will be competitive with natural gas powered plants in the foreseeable future. even if CO2 emissions are priced at $40 per ton which was the Obama Administration’s estimate of the damage from CO2 emissions.
What is needed are new designs which have a hope of dramatically lower costs of capital and fixed operating costs such as the liquid salt reactors being designed by Terrestrial Power.

Technically, it is possible to build traditional nuclear competitive with at least coal plants, as it is so in China, S. Korea. The political hurdle is the problem in the US.

Sorry douglas, but we’ve been chasing solar and wind dreams like yours for half a century, and they’ve never failed to disappoint (physicists know why).

With respect to climate change – let’s go with something that works, shall we?

Are we suffering from bad consequences of our system with free speech and free market?

Consider: can you name two legal activities, each of which, at a typical installation in a day of normal operation, deprives the presiding government of $100,000 to $200,000 in tax revenue?

You can’t even get units right.  Storage costs are given per kWh or MWh, not MW.

If storage gets anywhere near $50/kWh (let alone MWh), nuclear plants will pile it on and refill it every night to sell at premium rates in the late afternoon and evening.  Oh, and electric vehicles will be massively popular and consume all the electricity they can generate.  They’ll be huge cash cows.

Not as much free speech and free market, as the feedback loop between media and politicians. Media thrives on drama while politicians cater to those who care the most in each area. The result is extreme regulation for nuclear and high subsidies for renewables.

More importantly, perhaps, Nord Stream 2 announced that it is now financed. Ten billion euros for a gas pipeline from Russia to Germany that could supply half of Germany with power (the existing Nord Stream 1 could handle the other half). Of course, many countries will share the gas supplied, but still, it says a lot of what RE is doing to our future.