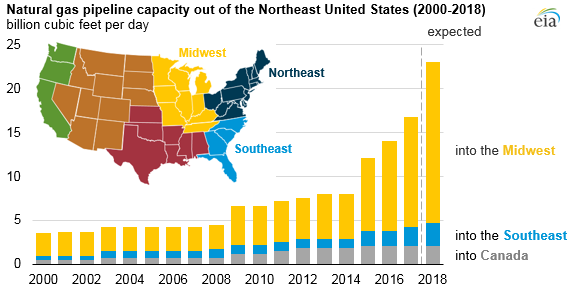 Currently, the growth of natural gas production in the Marcellus and Utica basins in Pennsylvania, Ohio, and West Virginia is constrained by the lack of available takeaway pipeline capacity to move it to new markets. As new pipeline projects come online, they will create an outlet for increased production, providing natural gas to demand markets in the Midwest, the Southeast, eastern Canada, and the Gulf Coast. Currently, no major pipeline capacity expansions in advanced development are slated to come online in New England because of stakeholder concerns raised in the development process.

Of the projects scheduled to be in service by the end of 2018, most are associated with four major interstate pipelines: Columbia Pipeline Group (TCO), which includes both Columbia Gas and Columbia Gulf Transmission; Transcontinental Gas Pipeline (Transco); Rover Pipeline; and NEXUS Pipeline. 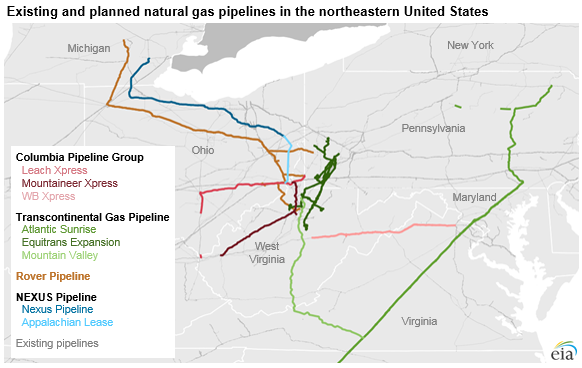 The Columbia Pipeline Group (TCO) has two expansion projects intended to add 4.2 Bcf/d of takeaway capacity out of the Northeast: Leach Xpress and Mountaineer Xpress. The Leach Xpress project, which entered service on January 1, 2018, supplies an additional 1.5 Bcf/d of capacity out of West Virginia and Ohio, and the Mountaineer Xpress project, which is scheduled to enter service in late 2018, will increase takeaway out of West Virginia by an additional 2.7 Bcf/d.

As much as 2 Bcf/d of the natural gas from these two pipelines can be sent directly to the Gulf Coast via expansion projects on TCO’s Columbia Gulf pipeline, and the remainder will enter the TCO pool in Boyd County, Kentucky. Another TCO expansion project, the WB Xpress project, will increase mainline capacity to both the east (500 MMcf/d) and west (800 MMcf/d) when it is completed in late 2018.

Three projects associated with the Transcontinental Gas Pipeline (Transco) are intended to add more than 3 Bcf/d of capacity out of Pennsylvania and West Virginia: Atlantic Sunrise, Mountain Valley Pipeline, and Equitrans Expansion. Atlantic Sunrise, the first phase of which was completed in 2017, is a nearly $3 billion project that will provide 1.7 Bcf/d of bidirectional capacity on the Transco System.

The first phase of Rover Pipeline was completed in late 2017, and Phase 2 is expected to come online in mid-2018. Phase 2 includes 3.25 Bcf/d of new capacity into Midwestern markets and the Dawn hub in Ontario, Canada.

NEXUS Pipeline, which follows a similar route to Rover, will add 1.5 Bcf/d of new capacity. Natural gas from the Marcellus and Utica basins will be delivered to this pipeline by the 950 MMcf/d Appalachian Lease Project, also scheduled to come online in 2018.

EIA is tracking more than 160 natural gas pipeline projects. Of these projects, 37 have been completed or are currently under construction and expected to come into service by the end of 2018. EIA’s Natural Gas Pipeline Projects tracker, updated quarterly, and EIA’s historical data for U.S. state-to-state pipeline capacities, are both available on EIA’s website.