The Nexus of Gravity and Energy 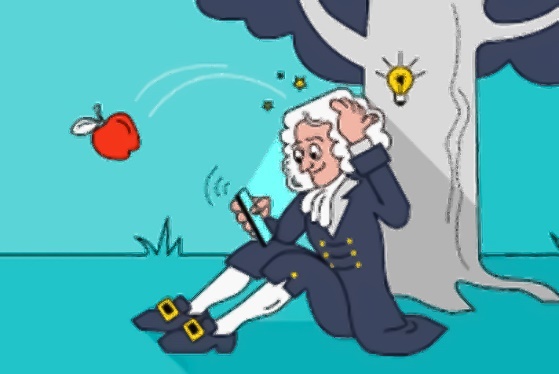 Reportedly Isaac Newton formulated his “gravitational theory” after witnessing an apple falling from a tree and questioned why the apple fell straight down, rather than sideways or even skyward?

He theorized that matter must have a force that pulls it towards other matter and that this  attraction was dependent on the different mass of the materials.

This theory was sufficiently robust and repeatable that it became scientific law and is back in the news for recovery of power from freewheeling electric motors moving downgrade and as a solution for large scale energy storage.

The Law of Gravity however hasn’t been revoked. A train loaded with coal moving downhill can recover energy in a battery that can be used to power the empty train back up the hill, but coal seams might not always be uphill from where the coal is required.

But 1600 years before Newton “discovered” gravity, Hero of Alexandria demonstrate the relationship between heat and work with his Aeolipile, which with steam assist was capable of  raising a weight and in latter-day iterations is capable of pulling a fully loaded coal train up an incline.

Renewable energy is ubiquitous, but the intermittence of solar and wind power has impeded its replacement of fossil fuels. To overcome intermittence, some are investigating the potential of large weights to store energy and reclaiming the weight’s gravitational potential when the stored energy is required by allowing the weight to fall. Which is the same  principle behind pumped hydropower. Where water from an elevated reservoir is released through a turbine and generator to produce electricity and the water is collected in a lower reservoir from where the water is pumped back up to repeat the cycle. Which is the same principle  J.R. Mayer used to define a Calorie as the work done against gravity by a mass of 427 kg falling 1 meter against a 1 g gravitational field to increase the temperature of 1 kilogram of water by 1°C.

But large scale energy storage is expensive as witnessed the fact the 2030 goal of the US Solar Energy Technologies Office is 2.5 times the $.02 levelized cost for Utility Photovoltaics and weights have to be raised to their original height if they are to regain their gravitational potential.

Every second however the sun evaporates 13.4 million cubic meters of water from the surface, 77 percent of which falls back as rain into the ocean and the remainder falls on to the land, where about one-sixth of this has been dammed for use for irrigation or power generation. But it is estimated only 22% of the world’s technically feasible hydropower potential is currently exploited so the total amount of water evaporated and available to produce power is about 2.6 million cubic meter per second. 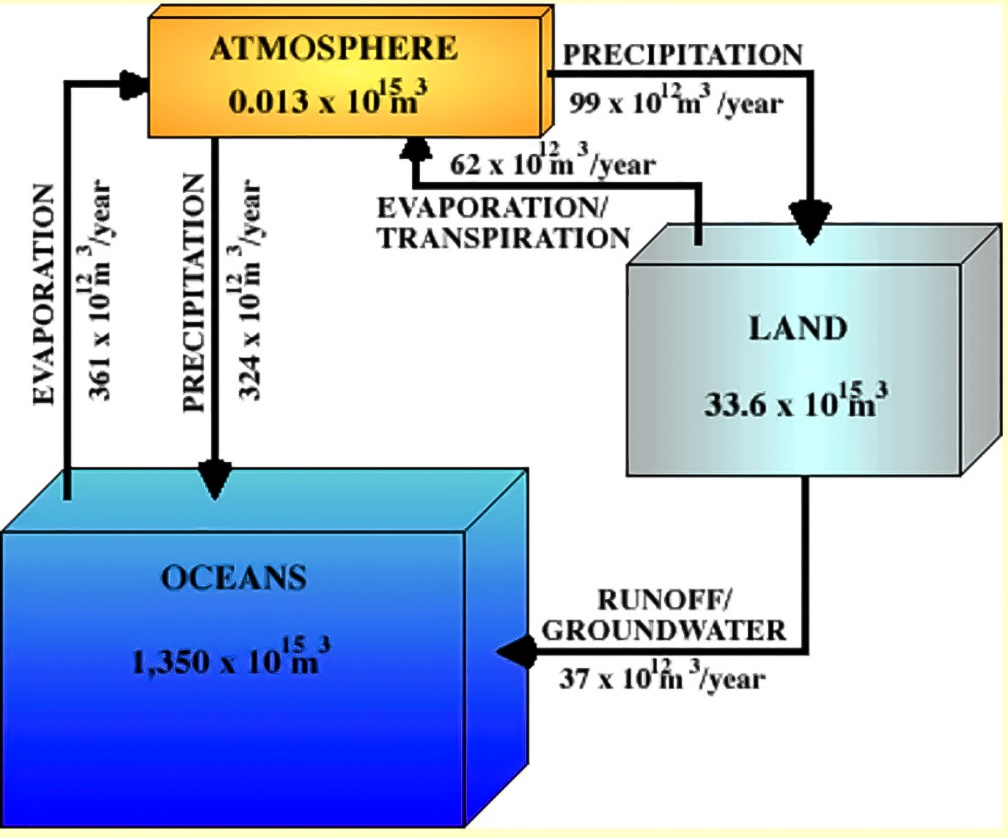 In oceanography, the unit of flow of water is the Sverdrup (Sv), which equals 1 million cubic metres per second. So, about 2.6 Sv is the maximum hydro potential.

Evaporation is the vaporization of water into a gas phase that is lighter than air enabling it to rise against gravity.

Evaporation transfers heat energy into droplets that release energy into the air as they condense and fall back to the surface under the influence of gravity.

When surface temperatures and the winds are right, this process can produce hurricanes that are the greatest storms on the planet, and in which a typical storm can release up to 300 terawatts of energy.

The thermohaline circulation, also known as the global conveyor belt, which is vital to the rate of sea ice formation near the poles and affects other aspects of the climate system, circulates 15 Sv.

Gravity and thermodynamics are the raw material for this circulation, which is the largest heat engine on the planet.

The “thermo” part of the circulation, "the pull", drives tropical surface towards the cold sinks of the poles in accordance with the second law of thermodynamics.

And the “haline” part of the circulation, "the push", is salt dropping out of seawater as it freezes falling under the influence of gravity to the ocean floor.

The average temperature of the ocean at a depth of 1000, where the water is at its maximum density is universally 4oC and the highest surface ocean temperatures is about 32oC making a differential of 27oC.

A 1 kilogram weight would theoretically have to fall 11,529 meters to produce a 27oC temperature rise but the Carnot efficiency of OTEC ranges between 3 and 7.6 percent and such a system would have to be reversible to produce work. The  theoretical hydraulic head warehoused behind a sizable portion of the tropical ocean surface is therefore in the range of 173 to 438 meters. Compared to  the average height of dams - defined as those with walls at least 15 metres high – which is 45 meters.

And this energy production is naturally reversible because of the diffusion of heat from the deep  back to the surface at a rate of 4 meters per year and the Thermohaline Circulation per the following graphic from Manchester University. 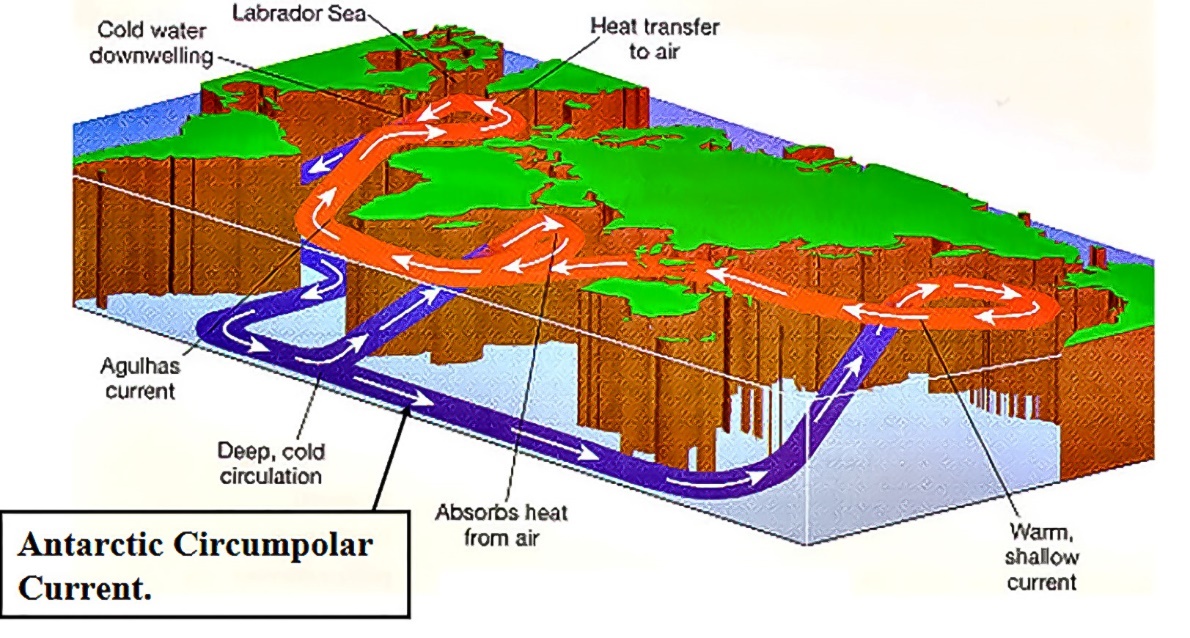 Just as warm air rises, so does warm water which creates a stratified ocean that impedes the vertical mixing of heat, carbon, oxygen, and nutrients vital to life in the ocean.

The same heat that creates evaporation of water and produces hurricanes however can also boil a low-boiling-working-fluid, like ammonia or CO2, to produce vapor that can drive heat against gravity into deep water and through a turbine to produce work.

This potential is almost one order greater than the total, technically feasible, amount of hydropower available. And is available for however long as the sun shines on the tropics but not on one the poles half of the year.

DOE secretary Granholm in a recent CNN interview, accused Russia of, “weaponizing energy”, “which is another reason why as a nation, we should move to energy sources that cannot be weaponized,” she said,

The oceans are the greatest global common that can never be weaponized, while providing all the energy we need, while mitigating every consequence of global warming.

In a recent Spectrum article about the 15 milestone winners of the Elon Musk for Carbon-Removal,  UCLA professor Gaurav Sant, professor of civil and environmental engineering, said, “For sheer scale, nothing could beat the oceans as a carbon sink. But the caveat for large-scale impact is to stabilize the CO2 in ocean water, not in a geological formation. The way to do that is to enhance the ocean’s natural uptake of CO2”, he said.

To enhance that uptake, all that is needed is to cool the surface while producing energy and relocating surface heat into deep water. Or we can be content with the status quo and let the chips fall where they may!