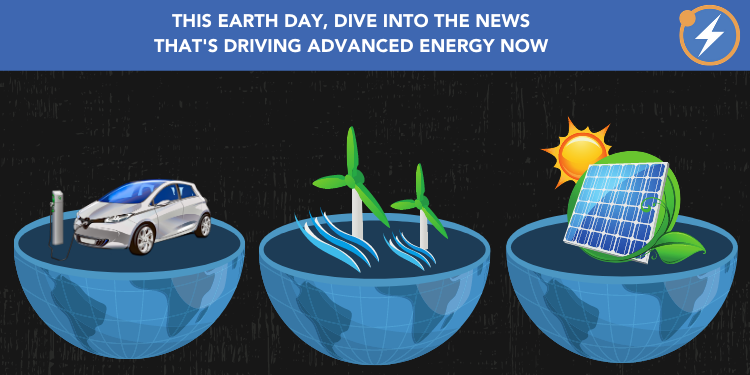 On this Earth Day, all eyes in Washington, D.C., are watching for news about U.S. climate commitments, but we turn our attention to new developments in the advanced energy industry, whose technologies and services can help fulfill those commitments while providing customer savings, economic growth, and jobs at the same time. And there is news aplenty – in solar power, energy storage, offshore wind, and electric transportation, to name a few. Let’s go to the clips.

The U.S. achieved a record 19.2 gigawatts of solar capacity installed during 2020, accounting for 43% of all electricity generating capacity added last year. Moreover, the sector is poised for rapid growth in the coming years, with solar in the running to become the cheapest energy resource by 2030, according to Wood Mackenzie. Supporting this trend, the U.S. Department of Energy announced plans for a $128 million program to reduce solar costs by 60% in 10 years. On top of that, the Save America’s Clean Energy Jobs Act, recently introduced in Senate, would allow solar investment tax credits (ITC) to be accessed through direct pay. A direct-pay solar ITC would also see a 10-year extension if legislators move on President Biden’s American Jobs Plan.

In the meantime, solar continues to thrive. In South Carolina, Dominion Energy will add an additional 2 GW of solar accompanied by 900 MW of battery storage as the utility phases out coal by 2030. Pennsylvania Gov. Tom Wolf recently announced a 191 MW solar deal to provide 50% of all electricity used by government buildings within the Keystone State. Even in Ohio, a state with uniquely anti-advanced energy policies, dozens of solar projects are underway and the state’s solar stream nearly tripled last year, positioning solar to match nuclear power in generation capacity, if the legislature doesn’t take further steps backward. The additional 7.5 GW of utility-scale solar now pending are projected to generate more than 54,000 jobs. And now Texas is adding solar to its national leadership in wind, with developers across the state now on track to bring 35 GW of combined wind and solar online by the end of 2023.

Recent developments also suggest that 2021 will be the year offshore wind really gets going in the U.S. As 2020 came to a close, Congress passed COVID relief legislation that included an offshore wind investment tax credit (ITC) of 30%, stimulating sector interest and growth. The Biden administration is also backing offshore wind. In early March, the Bureau of Ocean Energy Management (BOEM) under Biden issued the final environmental impact statement for the 800 MW Vineyard Wind offshore wind venture, signaling that final approval is nearing. Shortly thereafter, the White House announced plans to boost momentum behind offshore wind development along the East Coast through investments, low-interest loans, expedited permitting, and port upgrades. In Rhode Island, AEE member Orsted and utility Eversource Energy pledged to build a facility at the Port of Providence to fabricate and assemble foundation platforms for their joint offshore wind projects in federal waters off Rhode Island and New York, to be built by local, union labor.

Innovation is also boosting wind power productivity. Some developers are going big, in turbines and blades. Xcel Energy is launching a $750 million project to upgrade four wind farms in the Midwest, utilizing new technology, including bigger and better blades, to save ratepayers $160 million over the next 25 years. Meanwhile, others look to downsize. Pecos Wind Power and Vermont Public Power Supply Authority (VPPSA) are developing smaller wind turbines, standing around 120 feet tall, that measure up to productivity levels of much larger turbines. Their goal is to provide efficient and cost-competitive distributed energy to schools, businesses, and other facilities.

Things are also looking up for electrifying U.S. transportation. The Biden administration is particularly interested in enabling electric vehicle expansion to reduce emissions and position the U.S. auto industry for the future. In February, Biden signed an executive order to review domestic supply chains of electric vehicle materials and parts. The order represents an attempt to ease current semiconductor shortages and reduce reliance on foreign markets for EV parts. In addition, Biden’s proposed infrastructure plan would jump-start the EV shift through federal procurement and a $174 billion industry investment.

All this is just in time for major electrification announcements from auto manufacturers. Volvo, General Motors, and Volkswagen have revealed major plans to go electric.

And the possibilities for EVs to provide services to the grid as mobile storage units are just starting to show themselves. AEE member Highland Electric Transportation closed a massive school bus electrification deal with Maryland’s Montgomery County Public School district in February. The company plans to harness private capital and vehicle-to-grid (V2G) revenue—when the vehicles can provide excess battery power to the grid during peak demand—to give the schools a budget-neutral deal for electric school buses.

The Texas winter storm blackouts pointed out other ways that EVs like Teslas and Chevy Bolts can provide backup power as a place to plug in when the lights go out. For some, Ford’s F-150 PowerBoost hybrid pickup truck saved the day – or night – with its onboard power generator. “It was a lifesaver,” a retiree in rural Kerrville, Texas, told NBC News. “It gave us all the conveniences. We weren’t sitting in the dark, isolated.”