A new start in the energy sector? What the traffic light coalition is planning

The high prices on the energy markets were the main topic of the past few weeks. The long-term development of the energy industry will, however, be shaped much more by the coalition negotiations currently taking place between the SPD, the Greens and the FDP. Here we present the first results and potential points of conflict on the energy and climate policy agenda of the future German government.

The current status of reports on climate protection and the energy transition can be found in the 2021 climate protection report . The Federal Cabinet adopted this with a delay on November 3, 2021. The report includes the expected greenhouse gas reduction through measures that were decided by mid-2020.

Despite the coal phase-out law and the introduction of a national emissions trading scheme for the heating and transport sectors, Germany would miss its climate targets without further efforts. At a CO 2 price of EUR 60 / ton in the European emissions trading system (EU ETS), only a 51 percent reduction in greenhouse gas emissions would be achievable by 2030.

Under pressure from a ruling by the Federal Constitutional Court in spring 2021, the grand coalition tightened the Climate Protection Act - as one of its last energy and climate policy accents. Specifically, they name a mandatory reduction in greenhouse gas emissions of 65 percent by 2030. However, the new traffic light coalition must manage to implement the new goals.

The energy and climate policy goals cannot be achieved without a dramatic expansion of renewable energies. In their exploratory paper from mid-October 2021, the three coalition parties set themselves overarching goals in the area of ​​expanding renewables:

The designation of new areas for onshore wind farms in particular offers potential for conflict. Two percent of the federal territory is required as a backdrop for the necessary expansion of wind energy. The most recent report of the federal-state cooperation committee from the end of October 2021 makes it clear that nationwide only just under one percent of the area is currently legally designated for wind energy.

So far, only a few federal states have achieved high designation values. Meanwhile, Bavaria, Baden-Württemberg, Saxony, Thuringia and North Rhine-Westphalia in particular land at well below one percent. Disputes between the federal states about land designation are preprogrammed here. Figure 1 shows the designated areas (partially unfinished regional planning) of the federal states in relation to their state area. 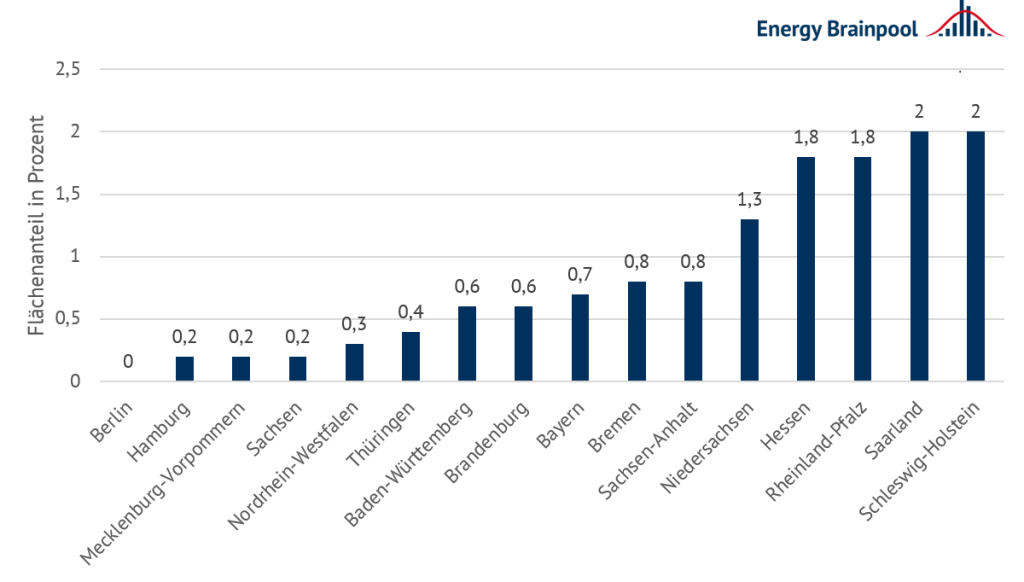 Furthermore, the new coalition in the federal government is aiming for an accelerated coal phase-out, ideally by 2030, as stated in the exploratory paper. To this end, the political actors should review the coal phase-out law for the first time during this legislative period and not until 2026. The massive expansion of renewable energies and new gas-fired power plants are cited as a prerequisite for an earlier phase-out. The latter should already be built to be hydrogen-powered.

Even if coal is phased out earlier, there could be conflicts between the federal states concerned, the federal government, as well as trade unions and the operators of coal-fired power plants. The exploratory parties are therefore also holding out the prospect of early or accelerated measures for the affected regions. 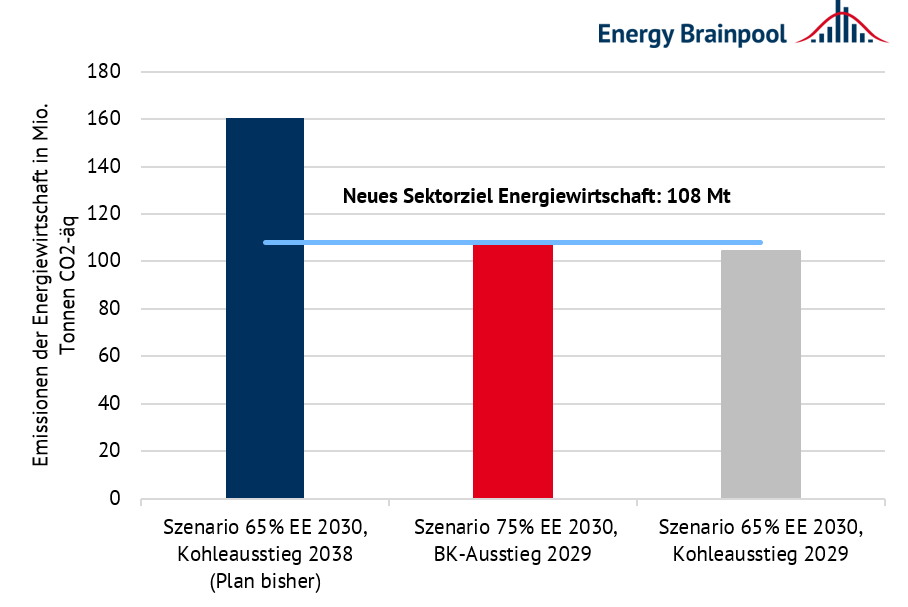 If CO 2 certificate prices continue to rise due to the tightening of European emissions trading, some of the coal-fired power plants could leave the electricity market for economic reasons alone.

Abolition of the EEG surcharge and a new electricity market design?

The further financing of the EEG surcharge is likely to come in part from the income from the national emissions trading system (nEHS). This should also be adapted to the specifications of the European Fit-for-55 package . This makes higher prices for the certificates in the nEHS more likely.

The development of a new electricity market design as part of the expansion of renewable energies is also mentioned in the exploratory paper. However, the coalition parties are not getting any more specific here. Various studies assume that by 2030 an additional 15-25 GW of gas-fired power plants will be required. So far, however, it is not yet clear how the market will expand the secured capacity from gas-fired power plants.

The development of a new electricity market design could mean the introduction of a capacity market. Or just changes to the remuneration of renewable energies and their further introduction into an unsubsidized system through PPAs.

On this point, too, there is likely to be conflicts between the coalition parties regarding the precise design of the new system. At the same time, the EU Commission always has a say in this matter.

Positive outlook for the energy industry

The transformation of the energy industry will accelerate in the coming years. The already passed climate protection law in Germany, the new regulations in the Fit-for-55 package of the EU, rising CO 2 prices and possibly higher energy prices are some of the drivers.

The energy industry has made particularly positive comments about the results of the coalition negotiations so far. If the new coalition of the SPD, Greens and FDP succeeds in waking politics and business at all levels from the slumber of energy and climate policy of the past few years, Germany could actually become a pioneer again in the expansion of renewables and in climate protection by 2030.

If CO 2 certificate prices continue to rise due to the tightening of European emissions trading, some of the coal-fired power plants could leave the electricity market for economic reasons alone.

How do you foresee the energy crisis going on right now impacting these trends?