New Nuclear: North Anna Unit 3 Should Be Approved Before The End Of May 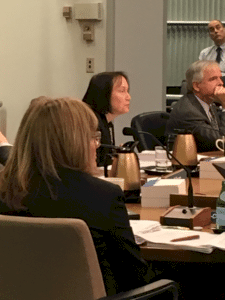 Dominion Resources’s North Anna nuclear power station unit number 3 should be approved for construction by the end of May 2017. It’s possible that the approval – in the form of a Nuclear Regulatory Commission (NRC) 10 CFR Part 52 combined license (COL) – could be issued within the next three weeks.

This would be a major milestone in a project that began in earnest in 2003. It might be the last milestone achieved for that project.

The NRC held the mandatory hearing required by the Atomic Energy Act for the North Anna 3 combined license on March 23. That was one of the very last steps before the commission votes on issuing the license needed to begin construction. According to the NRC’s Internal Commission Procedures document, the staff and license applicant have 14 days after the hearing to file answers to any follow-up questions from the commissioners during the hearing.

At that point, the commissioners will have access to all of the information that has been or will be assembled to support their vote. If the chairman of the commission calls for a vote two weeks from now, it can happen almost immediately.

If the commission follows its publicly available process (Chapter IV pg 15-16), the vote should take place before May 17, which is four months after January 17, the date on which the NRC staff issued the North Anna 3 Final Safety Evaluation Report (FSER).

Impressions From The Mandatory Hearing 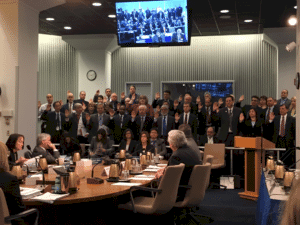 Shown are about 1/2 of the NRC staff members who were sworn in as potential witnesses during the North Anna Unit 3 COL hearing. Chairman Svinicki is administering the oath.

The hearing room at the NRC Headquarters held a large audience, the majority of whom were members of the NRC staff. Some of those staff members have devoted a substantial portion of their government service careers to various aspects of the approval process, begun in 2003 when Dominion first submitted its application for an early site permit (ESP).

The North Anna unit 3 (NA3) application process wasn’t typical. It included changes in the proposed plant design from the initial ESBWR to the APWR and then back to the ESBWR. It also included a significant period of angst and regulatory uncertainty caused both by the Fukushima events in Japan and by a surprisingly strong earthquake centered about a dozen miles from the site.

The company also had the challenging experience of realizing that their company-owned and created lake had become a popular recreation area for some politically active and wealthy property owners. Those new neighbors weren’t terribly keen on the idea of hosting a large industrial construction project that would result in changes to that lakeside living environment.

Most of that opposition has been overcome with several design changes, including a closed cycle cooling tower instead of direct lake cooling, but there may still be resistance met during any future construction effort.

During the break periods when the hearing was not in session, numerous conversation snippets could be heard discussing the comings and goings of people who had been assigned to the project. Others chatted about the innumerable number of meetings, phone calls, requests for additional information and public meetings associated with getting to where they were on the day of the hearing.

There are reasons to believe that the next time a COL referencing the ESBWR design gets submitted, the NRC could complete its evaluation in less than 14 years and require fewer than the 105,000 professional staff hours that were expended on the NA3 review.

Unfortunately, there are no other such applications in the current NRC queue and no publicly announced plans to begin one.

Dominion has publicly asserted that it is not planning to begin building NA3 immediately after receiving its COL. During the hearing, however, Dominion stated that it continues to need additional capacity for producing electricity. The company explained that NA3 is one of its higher ranked power options, but that the decision is still being influenced by outside forces.

Each year, the company submits an Integrated Resource Plan to its state regulatory body. Its plans are under continuous review as situations change.

During the fourteen years since the project began, natural gas prices tripled from $4 to nearly $12 per MMBTU and then fell as low as $2.00 per MMBTU. At one point, it seemed nearly certain that the federal government would improve the project’s ranking in the Integrated Resource Plan by restricting CO2 emissions in one way or another.

So far, however, there are no formal restrictions or costs associated with producing CO2 in the state of Virginia. The combination of currently low market prices and acceptable quantities of pollutants that have specific limitations (often called criteria pollutants) makes natural gas a lower cost option for reliable power production.

Even with the current negative external pressures that keep Dominion from making a final investment decision to build NA3, the company likes having it as a reasonably near term nuclear option. An NA3 COL provides at least some amount of virtual fuel diversity by giving the company a path away from an abject dependence on a single fuel source.

Exercising that option might be a bit harder than Dominion executives would like to believe, however. GEH, the partnership between General Electric and Hitachi that owns the ESBWR design, has not achieved the kind of sales success that encourages additional investment. There are only two projects in the US, NA3 and Detroit Edison’s Fermi Unit 3. Neither company has indicated a near term interest in beginning construction.

According to industry sources, GEH has broken up the engineering team that was supporting the ESBWR and moved the members to other tasks. There has been little or no detectable effort to establish a functional supply chain for the specialized components that make up the new and improved design.

The current challenges facing Westinghouse in its four reactor projects in the U.S. southeast are causing some industry observers to wonder if capability to build large light water reactors in the U.S. has been suspended for too long to expect it to ever be able to be competitive or successful.

Fortunately, the regulatory work accomplished for North Anna might still be advantageously applied even if there are no new large light water reactors. The company’s Early Site Permit used a Plant Parameter Envelope approach. That choice makes it possible to substitute a different technology – yet again – as long as the new technology has characteristics that fit within the allowed box envisioned.

Several NuScale power stations, for example, could fit into the siting parameters allowed on the permitted piece of land.

A version of the above was first published on Forbes.com. It is republished here with permission.

The post New Nuclear: North Anna Unit 3 Should Be Approved Before The End Of May appeared first on Atomic Insights.