New Mexico’s opportunity to deliver on its bold climate goals

In southeastern New Mexico, farmers saw temperatures that averaged seven degrees above normal in July. In Santa Fe, a wildfire charred five square miles on the outskirts of town and darkened skies for weeks. And currently, nearly three-fourths of the state is experiencing severe drought, as state officials grapple with plans to ensure critical water supply for cities, farmers, ranchers and more. 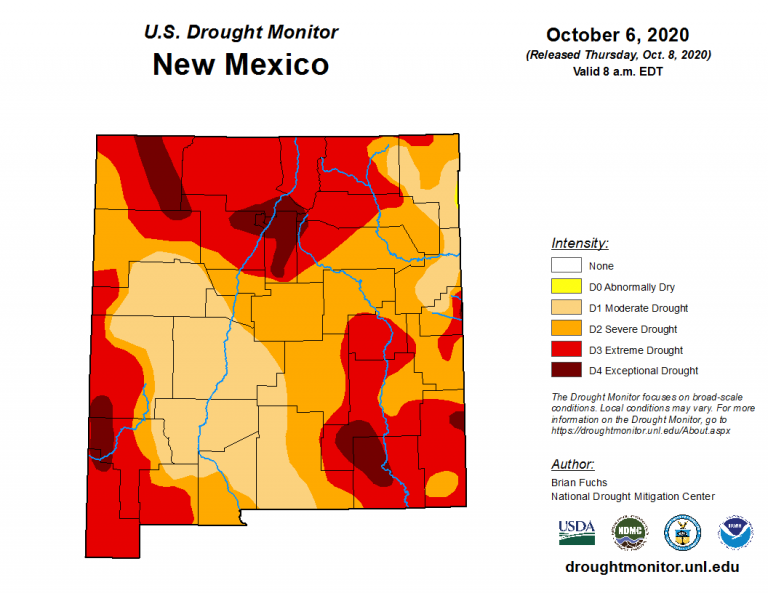 This year has been unusually hot and dry for New Mexico. And these grueling conditions put even more strain on New Mexicans, particularly disproportionately impacted populations like Black, Hispanic and tribal communities already reeling from the impacts of the COVID-19 pandemic. Heat and drought are becoming more severe and frequent in New Mexico as climate change accelerates. Without strong action to curb climate-warming emissions, the state could see twice as many dangerous heat days and a 70% increase in drought severity.

It is very encouraging then that New Mexico leaders like Governor Michelle Lujan Grisham and House Speaker Brian Egolf are moving to confront the crisis head on. In August, Speaker Egolf recognized these threats in a webinar on public health and climate change where he said the NM House of Representatives would make a “comprehensive climate package” that will “set emissions limits” a priority for the next legislative session in 2021.

A climate policy package from legislators would build on – and complement – the important groundwork that Gov Lujan Grisham has laid over the past few years. In January 2019, she issued an Executive Order to reduce greenhouse gas emissions 45% below 2005 levels by 2030, consistent with scientific recommendations. The order also directs state agencies to develop a climate strategy that puts the state on a pathway to achieve real and immediate progress.

Additionally, Gov Lujan Grisham has taken a number of other important actions on climate, including:

Following through on commitments and filling the gaps

The commitments Gov Lujan Grisham has set forth so far will play an important role in curbing emissions and building a more resilient and diverse economy – and it’s critical to get them across the finish line; however, they will likely not be enough to achieve her 2030 target and ensure that emissions continue falling.

And the governor and her administration acknowledge this fact. The first report from the New Mexico Interagency Climate Change Task Force last year, which was commissioned by the governor to explore climate solutions, acknowledges that current and planned policies “will likely fall short of the state’s emissions goals without a broader market-based program to reduce carbon usage and emissions.”

In addition, there are serious air pollution concerns facing environmental justice communities left unaddressed because of outdated state law that ties the hands of environmental regulators.

Here are two key components of a comprehensive climate policy package that address these challenges and should be prioritized by the legislature:

As state legislators get to work on climate, they should craft a comprehensive approach that includes policies capable of achieving Gov Lujan Grisham’s vision, including enshrining pollution targets into law and directing NMED to create enforceable rules that guarantee the state reduce emissions consistent with scientific recommendations. Legislators should also work to fill in important gaps – such as vital air pollution protections for environmental justice communities.

And they should do so urgently: New Mexicans are already feeling the impacts of worsening heat and drought. The time to act is now.