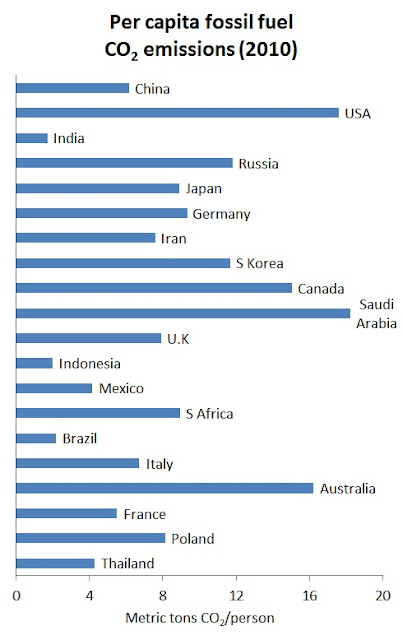 The chart includes roughly the top twenty fossil fuel CO2 emitters in the preliminary 2010 data, shown in order from top (China) to bottom. Once again, keep in mind this is preliminary data and does not include other emissions from land use change or emissions of other greenhouse gas emissions.

The simple calculation of per capita emissions is potentially misleadings, and raises a number of questions about attribution. If China is manufacturing goods for the North American market, should some of China’s CO2 emissions be attributed to North America? Also, how is energy use and emissions distributed within each country? Is the per capita emissions value skewed by a very unequal distribution of wealth? [I’ll let the Occupy movement tackle that one]

Growing human population with growing activity results in a growing carbon cycle. The false premise of this information is the presumed inability to store and cycle carbon.

Since the first civilizations of Sumeria, Egypt, and the Indus Valley land development through irrigation, plant growth and soil carbonization was a goal. The Great Depression in the US saw vast areas of the west become habitable and productive because of capable leadership.

This crowd is unique in history for their lack of understanding of the most basic biology.