Guarav Bhaduri and Lidija Siller were 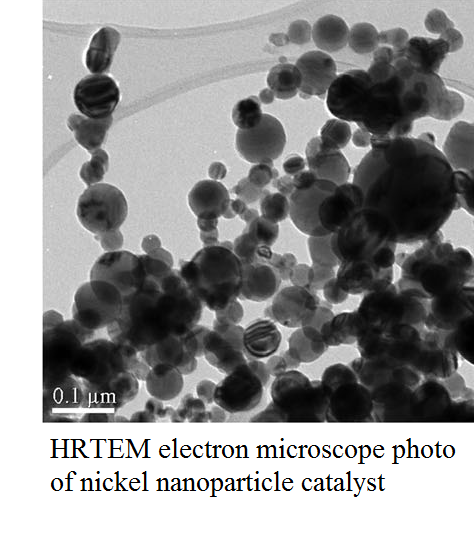 trying to understand how Nature turns CO2 gas into rock.  Their university, Newcastle U, became enthusiastic and published this:

“Could the humble sea urchin hold the key to carbon capture?“.

A BBC News article quotes co-author Dr. Lidija Siller:  “You bubble CO2 through the water in which you have nickel nanoparticles and you are trapping much more carbon than you would normally – and then you can easily turn it into calcium carbonate…”

“…It seems too good to be true, but it works”

The NU press release quotes Siller:  “the result was the complete removal of CO2″.

Lead author, PhD student Gaurav Bhaduri, is quoted: “ [the nickel catalyst]  is very cheap, a thousand times cheaper than carbon anhydrase”  The two researchers have patented the process and are looking for investors.

They compare their nickel to anhydrase because Nature uses anhydrase to mineralize carbon.  But humans trying to mimic nature with anhydrase, so far, have had problems creating the material cheaply enough, and they have needed to control pH.  Other ideas require too much energy.

Siller and Bhaduri were trying to do better with anhydrase:  they were going to “mobilize” it using the large surface area of nanoparticles.  They chose nickel because it is magnetic, a property they knew would come in handy when it came time to recycle it from the process.  To fully understand what nickel and anhydrase could do if combined, they had to study what nickel nanoparticles do on their own.

That’s when they made this discovery. 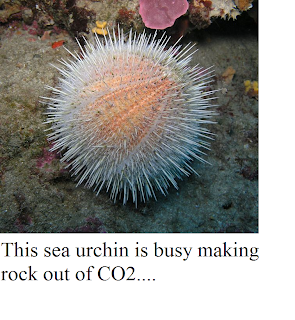 Siller studied sea urchins for years.  One reason to study urchins is because they are organisms that convert CO2 into solid exoskeleton material at ordinary temperature and pressure.  Siller, in an email:  “they are [a] main constituent in limestone formation”.  Siller had observed that urchins allow nickel from seawater to become part of their exoskeleton while restricting seawater iron.  I am not clear about whether she thought that nickel might be a key to understanding what urchins do before she and Bhaduri saw what happens to CO2 in water when nickel nanoparticles are added.

Siller and Bhaduri are not claiming they know how to make a solid out of CO2 on an industrial scale which would allow widespread conversion of carbon emissions to solid mineral, i.e. mineral sequestration.  They’ve observed that nickel nanoparticles accelerate one key reaction involved and that they do so over a wide range of pH, at ordinary temperature and pressure.

They are optimistic that the rest of the problems of mineral sequestration are soluble.  Here is where their work so far fits in:

If they were going to convert the CO2 from a coal plant exhaust stream into solid mineral, they would start by bubbling the exhaust through water in a continuously operating reaction vessel of some kind.

This is a significant contribution to making mineral sequestration feasible.  But unless the carbonic acid can be removed as it forms this is like flooring it to more rapidly accelerate up to the next stop light.  Its not going to get you to your destination any faster.

Chemistry World quoted Siller:  “The next step would be to mineralise carbonic acid to environmentally friendly solid minerals including magniesium carbonate, calcium carbonate and dolomite, which could be used a building material”.

They believe this next step will be a relatively easy step to make, compared to finding out about nickel nanoparticles.  Most of the Earth’s crust, they say, is made of roughly suitable material that could be used.  They are working with olivine rock.  Siller emailed:

“We want to neutralize the carbonic acid… with silicates – there are some basic silicate rocks such as olivine, serpentine, etc., which… do not have any CO2…”

The Mg and Ca in the powdered rock would react with carbonic acid turning it into solid carbonate which would precipitate out as solids at the bottom of the tank.  As the carbonate drops out more room is available for more CO2 gas to enter the water, which would make the process continuous.  Siller, quoted in Chemistry World:

“We would like to determine the reaction kinetics and exact yields. Once we have this information we plan to do a small continuous process in a lab-scale pilot plant“.

Kevin Anderson of the Tyndall Centre tells us of the “widespread view” among scientists operating at his level that the existence of civilization is threatened, i.e. we are committed as of now to climate change so disruptive it will prove to be “incompatible with an organized global community”, partly because we are fools in denial who have yet to lift a finger to save ourselves, but also because our fossil infrastructure has grown so large no one really sees how it can be dismantled in time.

Lidija Siller:  “We have not solved everything yet but we hope there is a chance.”

For some reason, the first reaction many people have when hearing of this discovery is to think that Bhaduri and Siller plan to use the ocean to remove carbon from the atmosphere.

Siller emailed:  “Regarding the confusion:  We do not want to spread nickel in environment, at the sea or on the ground next to coast etc.  We are targeting large emitters of CO2….“

Reaction speed is vital if any reaction is to be used in an industrial process.   If your process takes a day to complete and a competing process takes a minute, your reaction tank has to be more than 1000 times larger.  Size costs.

What people are using for practical applications capturing carbon from coal plant exhaust at pilot scale at the moment are chemicals that react with CO2 under certain conditions that give it up under other conditions, eg. amines. It costs energy to get the chemical to give up the CO2 so it can be reused. A catalyst such as what nickel appears to be facilitates a reaction that would occur regardless. You don’t have to force it with energy to operate.

The other big difference between what Siller and Bhaduri are aiming for and what exists today is that the usual carbon capture operation produces concentrated CO2 gas which is compressed into liquid and piped into underground storage.  It will need to be monitored for leakage.  We would be committing ourselves and our descendants to long term monitoring.

BAU scenarios for this century’s CO2 emission would create a volume of liquid CO2 as large as what’s in Lake Michigan.  Advocates of underground liquid CO2 storage say better that, even if civilization needs to monitor it for all time, than allowing that much CO2 to enter the atmosphere.  Critics point out that as the size of the total global underground CO2 pool grows larger, the percentage that can be allowed to leak, even on century timescales, grows smaller.

But if Siller and Bhaduri achieve their vision, turning CO2 gas into a solid that is stable over geological time will be economical. You could build buildings with it, dump it into large holes, whatever, but after that you could ignore it.  The CO2 couldn’t escape.  No one would have to pay attention to it.

Klaus Lackner has been the leading proponent advocating to civilization that it will end up needing to use carbon capture and mineral sequestration. His original 2003 Science paper is here. He explained his ideas to Congress in 2010 at a hearing of the House Science Committee which is here.