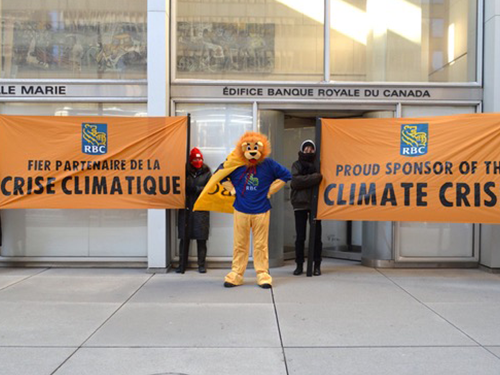 Photos courtesy of Fossil Banks: No Thanks

A series of socially-distanced demonstrations across Canada last Friday kicked off a national campaign to press the Royal Bank of Canada and other big banks to stop investing in fossil fuel projects and respect Indigenous rights.

The Fossil Banks: No Thanks campaign is focused on the C$178 billion in fossil fuel investments the RBC has approved since the Paris Agreement was adopted in 2015, ” the most of any other Canadian bank, and fifth in the world,” Radio Canada International reports. Campaigners say the country’s five biggest banks have poured $610 billion into fossil projects since 2016, pointing to the dollars flowing to the Coastal GasLink, Line 3, and Dakota Access pipelines.

In Toronto, protesters posted an “eviction notice” that charged Scotiabank with pumping more than $92 billion into fossil fuels over the last five years. In Montreal, a protester dressed up as the RBC mascot, with Extinction Rébellion Montréal spokesperson Sepideh Anvar explaining that “the lion is used to clean up the bank’s image at the same time as animals are hard hit by the banks’ financing of the fossil fuel industry and its effects on the environment,” RCI writes.

Photos courtesy of Fossil Banks: No Thanks

“Demonstrations in front of several bank branches and other locations across the country were small as protesters sought to comply with pandemic restrictions,” the news story adds. “The campaign also involves online actions, postering, and people contacting their banks to say they will withdraw their business unless changes are made.”

In an opinion piece for the Toronto Star, For Our Kids member and Engagement Organizing author Matt Price recalls his mom helping him open his first bank account at the RBC. [Same here—at the branch at the corner of Queen Mary and Westbury in Montreal—Ed.] “But when we recently helped our son open his first account recently, things were different,” Price writes. “We did it at a credit union instead, and made sure he knew we were doing this because the big banks were undermining his future by pouring hundreds of billions into fossil fuels.”

The reality is that “our seemingly boring Canadian banks are among the biggest funders of fossil fuels in the world,” he adds, with money flowing into the three pipelines along with fossil projects in Suriname, the Permian Basin in Texas, Argentina, Norway, and the UK.

“In sum, our banks are pouring gasoline on the climate crisis, putting our kids at risk,” Price says. “As parents, we need to tell them to stop, or at the very least not enable their bad behaviour by giving them our business and our money.”

Following up on the protest day, Below 2°C publisher Rolly Montpellier is out with a detailed how-to guide for anyone interested in moving their money out of one of the big banks. It includes sample letters to the five banks and a four-step guide to finding and moving to a new institution with a lower carbon footprint.