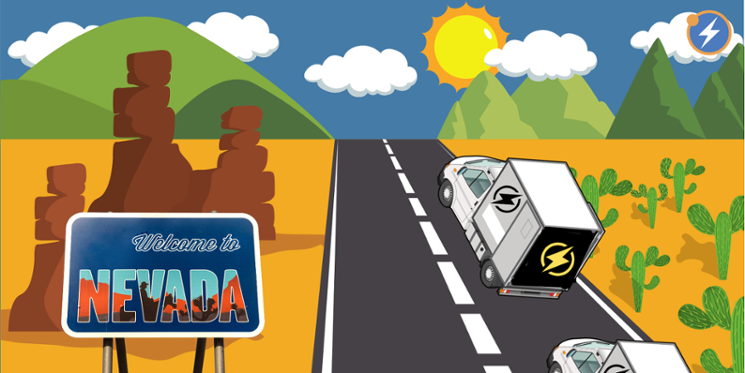 Nevada has taken many important steps toward creating an electrified transportation future. In June, Governor Sisolak announced the Clean Cars Initiative, which is a program designed to bring more low-emission and zero-emission cars and light duty trucks to Nevada dealerships. Then, the Nevada Climate Strategy and Division of Environmental Protection’s 2020 Greenhouse Gas Emissions Inventory report echoed the need for thoughtful state policy to expand consumer choice and build out charging infrastructure in order to transform the transportation sector. In addition to their focus on cars and light trucks, they both recognize that electrifying medium- and heavy-duty vehicles will also be critical to meeting  the state’s commitment to a zero-emission future. Fleet ownership will be the key.

According to the Bureau of Transportation Statistics, in 2018 nearly 8.5 million U.S. cars and trucks were part of a fleet owned or leased by businesses and government agencies, including public utilities, delivery and rental truck companies, and ridesharing networks. Fleet management and operations can represent a significant business expense, and on that score,  plug-in battery-powered vehicles have a lot to offer.

For fleet owners, who are more attentive to lifetime cost of ownership than individual owners, electric cars and trucks (EVs) offer many advantages over their internal combustion engine (ICE) equivalents. First, the price of electricity is significantly lower on a per-mile basis than the cost of gas or diesel. As of early January 2021, gasoline costs on average $2.15 a gallon, while an electric “eGallon” costs $1.24. Because heat is not lost when converting electricity into propulsion, electric engines are much more energy efficient than ICEs. Electricity prices also tend to be stable over time, which insulates fleet owners from the volatility of the global fuel markets and allows them to better project their costs.

Second, EV drivers save an average of 50% on repair and maintenance costs over their vehicle’s life when switching from an ICE car. In the Silver State, these savings are dramatic: Consumer Reports has found that Nevadans will spend 60% less per year on operating costs when driving electric. The reasons for this are simple. Electric engines have only approximately 20 parts that can break; ICEs have thousands. EV drivers are spared from the accumulating costs of oil, transmission fluids, and coolant changes, while regenerative braking, which turns the motor into a generator to slow down the vehicle and recharge the battery, significantly reduces wear and tear on brake pads. Especially for vehicles that stop and start frequently in urban environments, the unique driving characteristics of electric vehicles make them top performers. For all these reasons, the EV market for fleet vehicles is likely to take off even faster than for private passenger vehicles.

We see this transformation starting already. Amazon, which spent $27.7 billion on global shipping costs in 2018, ordered 100,000 electric delivery vans from startup Rivian, 10,000 of which will hit the road by 2022. UPS is also all in. Its fleet consists of about 125,000 package cars, vans, tractors, and motorcycles. Over the last few years, UPS has purchased over 10,000 electric delivery trucks from Arrival and a class 8 electric tractor-trailer truck from eCascadia, converted 1,500 delivery trucks in New York, and ordered 125 Tesla semi-trucks and another 950 electric vans from Workhorse. UPS is even investing in electric cargo bicycles to aid with urban deliveries in Pittsburgh and Seattle. Schneider Electric has committed to replacing its entire fleet of more than 14,000 vehicles by 2030. As the United States Postal Service looks to spend over $6 billion on nearly 200,000 new mail trucks, EV manufacturers are going up against conventional vehicle makers for the contract. Ryder is purchasing over 1,000 Class 5 Chanje electric vans to lease to FedEx. Anheuser-Busch deployed 21 BYD Class 8 trucks in Southern California in 2019, and it has ordered 40 Tesla semis. Pepsico has invested in electric semi-trucks, electric tractors, electric box trucks, and electric forklifts at its Modesto facility. Comcast is piloting electric vehicles and electric golf carts to eliminate tailpipe emissions from its entire fleet, which includes 30,000 vans, trucks, SUVs, and sedans.

The global EV100 initiative features leaders who have committed to significant fleet electrification by 2030. Among others, this includes: Biogen, Clif Bar & Company, Delta Electronics, Deutsche Post DHL Group, EDF Group, Genentech, IKEA Group, Lime, Lyft, Orsted, Schneider Electric, Unilever, and VMWARE. Pacific Gas & Electric, with one of the cleanest vehicle fleets in the energy industry, is also a member, along with the Port Authority of New York and New Jersey, which is electrifying its airport shuttle buses and transitioning 50% of its light duty vehicles to electric by 2025, with the remaining half by 2030.

The momentum that comes from these large-scale purchases will help manufacturers scale up their operations, which will drive down electric car and truck prices for everyone, including smaller businesses and individual drivers. This will only improve the business case for electric fleets even further.

But electric fleets have some specialized needs, and for the market to really take off, state action is required. Charging infrastructure must be in public locations and along highly trafficked interstate transportation corridors, and utility regulation needs some revisions to accommodate different charging speeds. Some electric grid infrastructure also must be upgraded to meet depot charging demand.

So what does this mean for decision makers who are eager to accelerate this transition? Last July, 15 Governors signed a Multi-State Zero Emission Medium- and Heavy-Duty Vehicle Memorandum of Understanding (MOU), committing their states to work together to foster a self-sustaining market for these vehicles and identify ways to remove barriers to electrification of truck and delivery vehicle fleets. MOU signatories include California, Colorado, Connecticut, the District of Columbia, Hawaii, Maine, Maryland, Massachusetts, New Jersey, New York, North Carolina, Oregon, Pennsylvania, Rhode Island, Vermont, and Washington. By joining this MOU, Governor Sisolaks can signal Nevada’s commitment to facilitating electric fleet deployment across states and regions.  .

Next, state and local governments can play a role in facilitating the deployment of charging infrastructure in convenient public locations and along highly trafficked or critical transportation corridors and encourage the development of new EV charging rates that are more suitable to public fast charging. States can implement regulations to make light-, medium- and heavy-duty electric vehicles available for purchase in-state, and offer financial assistance to make sure the benefits are spread throughout communities in an equitable way. And finally, public entities can lead by example by electrifying their own fleets.

At AEE, we are heavily engaged in these types of efforts across the states, including Nevada, California, Texas, Pennsylvania, Virginia, and Florida. Stay tuned for lots of news in the coming year – and keep a special eye on fleets.

Download AEE’s fact sheet on medium- and heavy-duty electric vehicles by clicking below.